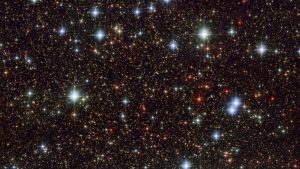 https://www.iau.org/public/themes/naming_stars/
This colourful and star-studded view of the Milky Way galaxy was captured when the NASA/ESA Hubble Space Telescope pointed its cameras towards the constellation of Sagittarius (The Archer). Blue stars can be seen scattered across the frame, set against a distant backdrop of red-hued cosmic companions. This blue litter most likely formed at the same time from the same collapsing molecular cloud. The colour of a star can reveal many of its secrets. Shades of red indicate a star much cooler than the Sun, so either at the end of its life, or much less massive. These lower-mass stars are called red dwarfs and are thought to be the most common type of star within the Milky Way. Similarly, brilliant blue hues indicate hot, young, or massive stars, many times the mass of the Sun. A star’s mass decides its fate; more massive stars burn brightly over a short lifespan, and die young after only tens of millions of years. Stars like the Sun typically have more sedentary lifestyles and live longer, burning for approximately ten billion years. Smaller stars, on the other hand, live life in the slow lane and are predicted to exist for trillions of years, well beyond the current age of the Universe.

Thank you! Your submission has been received!
Oops! Something went wrong while submitting the form.
END_OF_DOCUMENT_TOKEN_TO_BE_REPLACED