A geologist’s perspective on the environmental impact of fracking. Does it affect water quality? Does it cause earthquakes?

What is hydraulic fracturing?

It’s called hydraulic fracturing because the process utilizes high water pressures to fracture the rocks. Geologists have found that some rocks have substantial quantities of oil or gas in them. But the permeability of these rocks – the ability of the rock to transmit fluids – is low. Hydrocarbons, which are the chief components of petroleum and natural gas, won’t come out without some kind of stimulation.

The most cost-effective stimulation technique, and perhaps the only technique, is hydraulic fracturing. You drill a well and use devices to isolate a certain part of the well to fracture. Inside that zone, you build up the water pressure until the rock fractures. Afterward, you introduce fine sand into the fracture. Then, when the fluid pressure is released, the sand grains keep open the fractures so that the gas or oil can flow back out the well and to ground surface.

Why do oil and gas companies use fracturing?

In most places, the easy-to-get oil and gas have been essentially recovered. So we need new techniques to recover those hard-to-get resources.

Hydraulic fracturing enables production of oil and gas from shale or very low permeability rocks. Without fracturing, the flow of oil and gas into the well would be so slow that producing them just wouldn’t be economical.

Can you mention some studies related to the effect of fracturing on the environment? 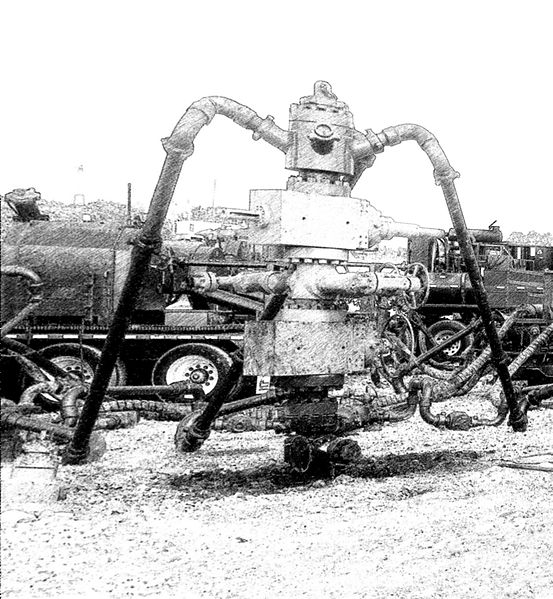 Drawing of a pump used in hydraulic fracturing via Wikimedia Commons.

All sorts of reports can be found on the Internet and in the news of well contamination from hydraulic fracturing. Part of our ongoing research has been to look at these reports and try to assess their validity and whether the conclusions can be substantiated.

So far there is no evidence that any water well contamination has been caused by fluids from shale gas wells leaking. There may be impacts that are more of a secondary impact related to the drilling process.

Reports that methane has contaminated water wells in Pennsylvania and in some parts of Texas have also been ascribed to methane leaking out of gas wells. In both Pennsylvania and in north Texas – and in other areas of the U.S. overlaying gas shales – methane has historically been found in the aquifers. Even prior to the use of hydraulic fracturing, there were historical reports in the Denton area in Texas of 12-foot flames shooting out of the newly completed water wells. That happened because gas is escaping out of the aquifer. These reports show that methane is regularly found in some of these areas in the aquifers, even when fracturing isn’t happening there.

Some of the gas companies, the USGS, and the Penn State Extension Service have done background chemical analyses, using residential water wells, before any hydraulic fracturing has begun in the area. They’ve found somewhere between a quarter and a half of the wells have methane in them. This is naturally-occurring methane. It was there before any drilling started. This has created a problem for the gas companies in that the occurrence of methane has been blamed on the drilling.

In your opinion, what’s the biggest misconception people have about fracturing?

I think the biggest misconception appears to be that the main danger comes from hydraulic fracturing itself, even though the activities are typically four, five, six, seven, eight, nine, ten, twelve thousand feet beneath the surface. Potable groundwater is typically within a couple of hundred feet of the surface. So many thousands of feet of partially impermeable rocks are between where the hydraulic fracturing occurs and the potable groundwater being tapped for residential water wells.

In actuality, probably a more dangerous threat to the people’s groundwater comes from surface spills, from trucks having accidents, from spills related to tanks leaking. More attention needs to be paid to the causes and remediation of surface spills.

What about reports that fracturing causes earthquakes?

There have been cases where hydraulic fracturing appears to have set off very small earthquakes. The only well-documented case occurred in England. This earthquake was strong enough that, if you were standing above it, the earthquake would have felt like a big truck rumbling by. These are the kind of earthquakes that occur somewhere in Texas nearly every week. I know people are unsettled by this, but, in geologic terms, it’s something Earth does naturally and often.

There have also been small earthquakes – about that same strength I just described – set off by disposal of the saltwater that flows back from hydraulic fracturing. These disposal wells are typically much deeper than the hydraulic fracturing wells, often thousands of feet deeper. And they have much greater sustained injection rates, because large amounts of salty water are being disposed. Earthquakes of this kind have been documented near the Dallas / Ft. Worth Airport for example.

But these are rare events. Most fluid disposal wells do not create detectable earthquakes. Seismologists who study this phenomenon say that the chances of setting off a significant earthquake in the top 10 to 15 thousand feet of Earth’s crust are small. Fracturing is not likely to create some kind of killer earthquake. These rare earthquakes from fracturing are the kind you can barely feel.

Currently, there’s a lot of research looking into these kinds of small earthquakes. And I think we’ll start to get some ideas as to how we can minimize the chances of even those small quakes occurring during hydraulic fracturing.

How would you answer those who have concerns?

I fully understand why people are concerned about these things. Any kind of drilling for oil or gas – including hydraulic fracturing – is very intrusive. But I hope that people will look at the facts and scientific information that’s coming out on this subject in a dispassionate way, rather than emotional way.
And of course there are positive aspects, too, for the community, such as economic development.

There is the fact that the nation and the world are obtaining much-needed energy by this process. We have limited choices in how we get our energy. Natural gas is an energy choice with a relatively low environmental impact, versus coal or some of the other choices.

There’s always an impulse to say not in my backyard, but what are the alternatives? The alternatives are more coal mining, more mountaintop removal, more importing of oil from foreign places.

The Nature Conservancy has noted that, in Pennsylvania, gas drilling will result in about 40 percent more impact on the landscape than the wind farms that are going into Pennsylvania. But, at the same time, natural gas will also produce more energy. So, we need to consider the larger picture of obtaining the energy we need, while preserving land and water resources as best as possible.

So I think natural gas has to be an important part of our energy mix, and I hope people will look at the big picture.