The human language that we know today arose from a fusion of birdsong and the pragmatic, content-carrying parts of speech of other primates, say researchers 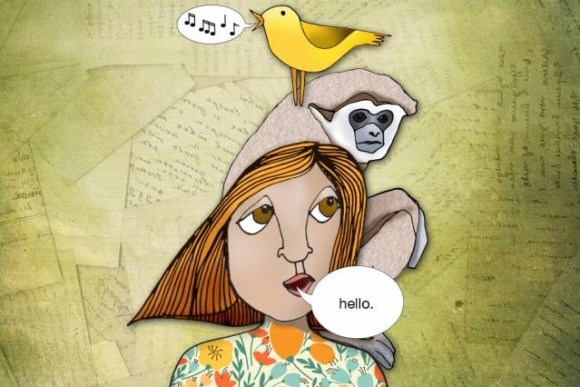 “Yes, human language is unique, but if you take it apart in the right way, the two parts we identify are in fact of a finite state,” Miyagawa says. “Those two components have antecedents in the animal world. According to our hypothesis, they came together uniquely in human language.”Illustration credit: Christine Daniloff/MIT

On the island of Java, in Indonesia, the silvery gibbon, an endangered primate, lives in the rainforests. In a behavior that’s unusual for a primate, the silvery gibbon sings: It can vocalize long, complicated songs, using 14 different note types, that signal territory and send messages to potential mates and family.

Far from being a mere curiosity, the silvery gibbon may hold clues to the development of language in humans. In a new paper in Frontiers in Psychology, two MIT professors assert that by re-examining contemporary human language, we can see indications of how human communication could have evolved from the systems underlying the older communication modes of birds and other primates.

From birds, the researchers say, we derived the melodic part of our language, and from other primates, the pragmatic, content-carrying parts of speech. Sometime within the last 100,000 years, those capacities fused into roughly the form of human language that we know today.

But how? Other animals, it appears, have finite sets of things they can express; human language is unique in allowing for an infinite set of new meanings. What allowed unbounded human language to evolve from bounded language systems?

Linguist Shigeru Miyagawa is the Kochi-Manjiro Professor of Japanese Language and Culture at MIT. He said:

How did human language arise? It’s far enough in the past that we can’t just go back and figure it out directly.The best we can do is come up with a theory that is broadly compatible with what we know about human language and other similar systems in nature.

Yes, human language is unique, but if you take it apart in the right way, the two parts we identify are in fact of a finite state. Those two components have antecedents in the animal world. According to our hypothesis, they came together uniquely in human language.

Read more about the research and the ‘integration hypothesis’ here