Experiments with mice at Rockefeller University show that artificial lighting can disrupt the natural circadian rhythm, with many detrimental results.

For billions of years, all living things directly touched by the sun’s light have choreographed their activities around the 24-hour cycle of day and night. It’s our internal body clock known as the “circadian rhythm.”

But what happens when our body clock goes out of sync with the natural rhythms of day and night?

That question has been increasingly important since the invention of electricity. For more than 100 years, we’ve been living in a world that increasingly defies darkness. When night falls, cities shine bright and homes are bathed in light. What kind of toll is that taking on our bodies? How does it affect the health of shift workers who work at night and sleep during the day, for example, or airline crews who routinely cross back and forth over time zones?

Scientists at Rockefeller University have been running experiments with mice to find out how they react to disruptions in their natural circadian rhythm. Their mice lived in two groups: one group was living in a 20-hour day of 10 hours light and 10 hours darkness. The second group, the control group, lived in a 24-hour day that was in sync with their natural circadian rhythm.

What happened to the 20-hour day mice? The results of a paper reported in Wired Magazine said,

Within six weeks, the disrupted group started to gain weight, despite eating the same diet as controls. They grew obese, and had altered levels of insulin and leptin, two key metabolic hormones.

Effects extended to their brains. In the prelimbic prefrontal cortex, a region important to emotional control and cognitive flexibility, neurons shrank and were arranged in less complex ways. The mice had trouble learning to navigate mazes, and were spooked by new environments.

However, mice are not men. Assessing the impact of a well-lit 24-hour day on people isn’t a straightforward process. But mice and humans are mammals, and have many biological processes in common. Perhaps these studies will provide a foundation to understanding how disruptions in circadian rhythms impact the brain, as well as physiology and behavior.

An interview with one of the scientists involved in this research can be heard as a podcast by Intrepid Insights. 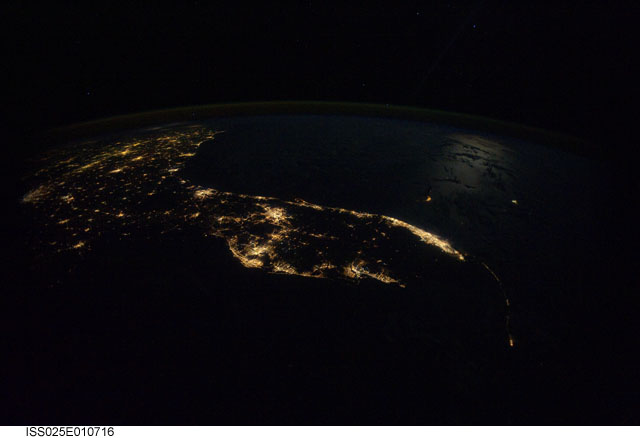 Florida at night, taken from the International Space Station on October 31st, 2010. The outline of lights shows the Gulf and Atlantic coasts. Image Credit: NASA