Did this human species coexist with our ancestors?

Fossil remains of Homo naledi found in a South African cave might be the first evidence of another species of hominin coexisting with the first humans in Africa. 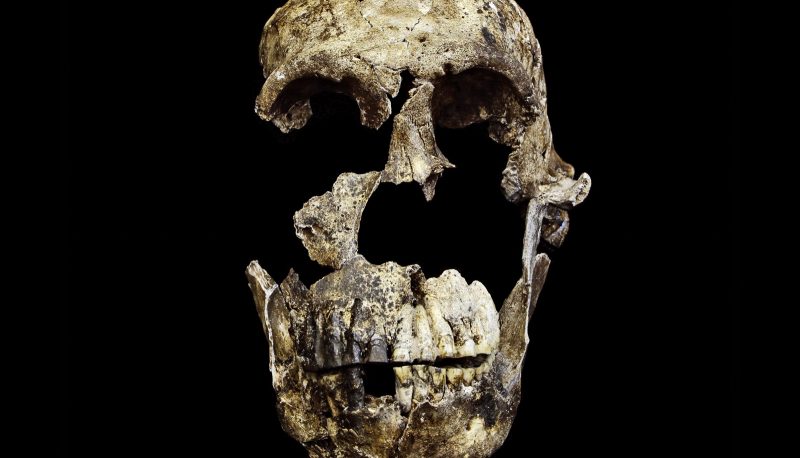 This skull, part of a skeleton that scientists have named Neo, was found in the Lesedi Chamber of the Rising Star Cave system in South Africa. Image via John Hawks/U. Wisconsin.

Fossil remains of Homo naledi discovered in a South African cave suggest that they likely coexisted with Homo sapiens, the species of modern humans. This evidence is the first to suggest that another species of hominin survived alongside the first humans in Africa, according to a study published May 9, 2017 in the journal eLife.

The researchers made the most recent discovery last year, in the Lesedi Chamber of the Rising Star Cave system, northwest of Johannesburg, South Africa. The find expands the fossil record of 15 individuals originally reported from a different chamber of the cave in 2015, and contains additional skeletal remains of Homo naledi that include a child and partial skeleton of an adult male with a well-preserved skull.

These fossils — primitive, small-brained human ancestors – are believed to be between 236,000 and 335,000 years old. This suggests that Homo naledi may have coexisted, for a period of time, with Homo sapiens, the species of modern humans. Homo sapiens is believed to have appeared around 200,000 years ago, in East Africa.

According to a University of Washington statement:

The age [of the fossils] indicates that Homo naledi may have survived for as long as 2 million years alongside other species of early humans in Africa. In the period in which Homo naledi is believed to have lived, known as the Middle Pleistocene, it was previously thought that only Homo sapiens existed in Africa. That time is also characterized by the rise of what is considered “modern” human behavior in southern Africa, such as the use of complex tools and burial of the dead. 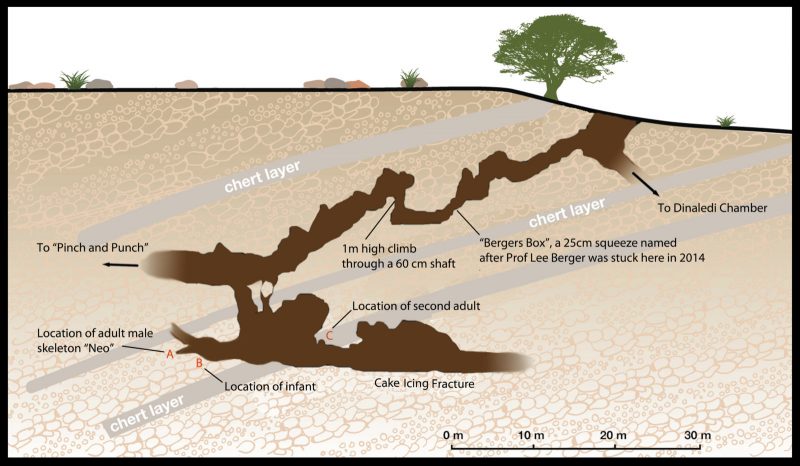 This diagram shows the narrow twists and openings of the Lesedi Chamber, along with labels where some remains were found. The excavation of that chamber, researchers believe, provides further evidence that this early human species deliberately disposed of its dead in these remote, hard-to-reach caves. Image via U. Washington.

Lee Berger at the University of the Witwatersrand in South Africa, assembled the team that first explored the Rising Star system in 2013 and is an author of the new studies. Berger said in a statement:

We can no longer assume that we know which species made tools, or even assume that it was modern humans that were the innovators of some of these critical technological and behavioral breakthroughs in the archaeological record of Africa.

If there is one other species out there that shared the world with ‘modern humans’ in Africa, it is very likely there are others. We just need to find them.

The finds so far indicate that Homo naledi walked upright and used its hands for complex grasping — like Homo sapiens — but also had an upper limb structure that was built for climbing, like more primitive humans. Elen Feuerriegel is a postdoctoral researcher in the anthropology department at the University of Washington. Feuerriegel said in a statement:

What we’re seeing is the importance of compromise in our own genus. The fact that Homo naledi has a similar hand and wrist to Homo sapiens, but a brain one-third the size of ours, shows that they may not have needed as much brainpower to do complex things. The process of human evolution is more complicated than we thought.

Darryl de Ruiter is a professor of anthropology at Texas A&M University. He said:

We have further proof that Homo naledi intentionally buried their dead and the bodies we found in the cave show that they were deliberately placed in the cave soon after death.

Neanderthals and their ancestors — which go back about 400,000 years – and humans are the only species we know that intentionally buried their dead, so this cave adds another species to the list of relatives who participated in this most human of behaviors.

Further excavation of the cave system is planned, an undertaking that requires excavators who can squeeze through passages as narrow as 7 ½ inches and spend hours 100 feet underground.

Bottom line: Fossil remains of Homo naledi discovered in a South African cave suggest they lived around the same time as our ancestors, the first evidence of another species of hominin coexisting with the first humans in Africa.