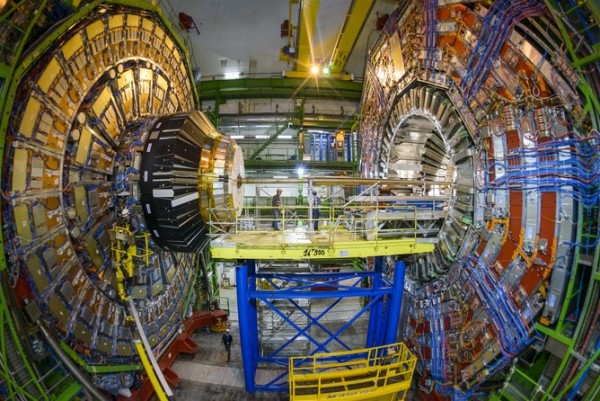 By Harry Cliff, University of Cambridge

At the start of December a rumour swirled around the internet and physics lab coffee rooms that researchers at the Large Hadron Collider had spotted a new particle. After a three-year drought that followed the discovery of the Higgs boson, could this be the first sign of new physics that particle physicists have all been desperately hoping for?

Researchers working on the LHC experiments remained tight-lipped until December 14 when physicists packed out CERN’s main auditorium to hear presentations from the scientists working on CMS and ATLAS experiments, the two gargantuan particle detectors that discovered the Higgs boson in 2012. Even watching the online webcast, the excitement was palpable.

Everybody was wondering if we would witness the beginning of a new age of discovery. The answer is … maybe.

The CMS results were revealed first. At first the story was familiar, an impressive range of measurements that again and again showed no signs of new particles. But in the last few minutes of the presentation a subtle but intriguing bump on a graph was revealed that hinted at a new heavy particle decaying into two photons (particles of light). The bump appeared at a mass of around 760GeV (the unit of mass and energy used in particle physics – the Higgs boson has a mass of about 125 GeV) but was far too weak a signal to be conclusive on its own. The question was, would ATLAS see a similar bump in the same place?

The ATLAS presentation mirrored the one from CMS, another list of non-discoveries. But, saving the best for last, a bump was unveiled towards the end, close to where CMS saw theirs at 750GeV – but bigger. It was still too weak to reach the statistical threshold to be considered solid evidence, but the fact that both experiments saw evidence in the same place is exciting.

The discovery of the Higgs back in 2012 completed the Standard Model, our current best theory of particle physics, but left many unsolved mysteries. These include the nature of “dark matter”, an invisible substance that makes up around 85% of the matter in the universe, the weakness of gravity and the way that the laws of physics appear fine-tuned to allow life to exist, to name but a few. 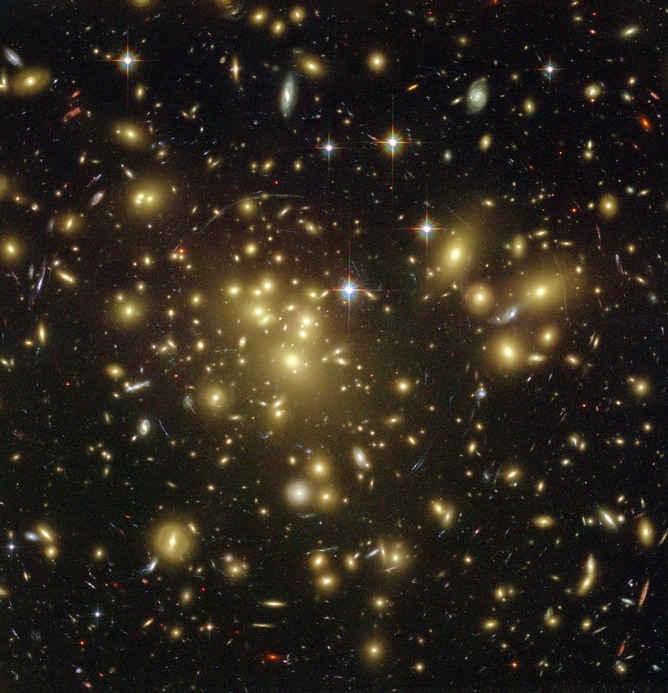 Could supersymmetry one day crack the mystery of all the dark matter lurking in galaxy clusters? Image credit: NASA/wikimedia

A number of theories have been proposed to solve these problems. The most popular is an idea called supersymmetry, which proposes that there is a heavier super-partner for every particle in the Standard Model. This theory provides an explanation for the fine-tuning of the laws of physics and one of the super-partners could also account for dark matter.

Supersymmetry predicts the existence of new particles that should be in reach of the LHC. But despite high hopes the first run of the machine from 2009-2013 revealed a barren subatomic wilderness, populated only by a solitary Higgs boson. Many of the theoretical physicists working on supersymmetry have found the recent results from the LHC rather depressing. Some had begun to worry that answers to the outstanding questions in physics might lie forever beyond our reach.

This summer the 27km LHC restarted operation after a two-year upgrade that almost doubled its collision energy. Physicists are eagerly waiting to see what these collisions reveal, as higher energy makes it possible to create heavy particles that were out of reach during the first run. So this hint of a new particle is very welcome indeed.

A cousin of Higgs?

Andy Parker, head of Cambridge’s Cavendish Laboratory and senior member of the ATLAS experiment, told me: “If the bump is real, and it decays into two photons as seen, then it must be a boson, most likely another Higgs boson. Extra Higgs are predicted by many models, including supersymmetry”.

Perhaps even more exciting, it could be a type of graviton, a hypothesised particle associated with the force of gravity. Crucially, gravitons exist in theories with additional dimensions of space to the three (height, width and depth) we experience.

For now, physicists will remain sceptical – more data is needed to rule this intriguing hint in or out. Parker described the results as “preliminary and inconclusive” but added, “should it turn out to be the first sign of physics beyond the standard model, with hindsight, this will be seen as historic science.”

Whether this new particle turns out to be real or not, one thing that everyone agrees on is that 2016 is going to be an exciting year for particle physics.