Alzheimer’s disease slows when you exercise body and mind

Hard evidence that Alzheimer’s can be slowed by physical and mental exercise, a diet rich in plants, and by monitoring risk factors for cardiovascular disease. 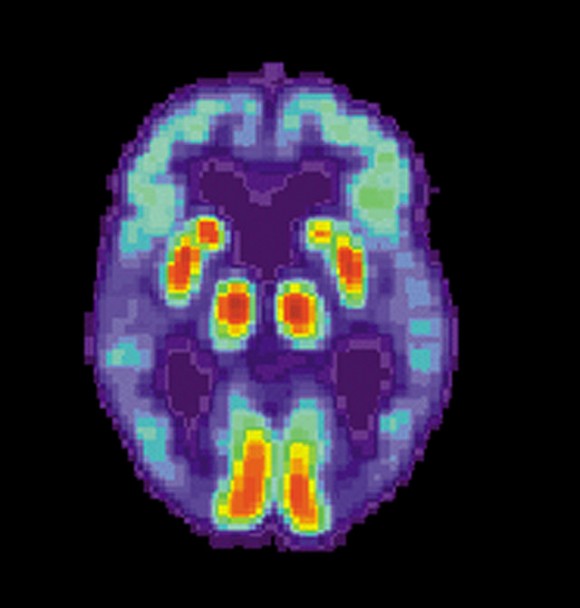 PET scan of the brain of a person with Alzheimer’s disease, showing a loss of function in the temporal lobe, via Wikimedia Commons.

A new study from Sweden gives some of the strongest evidence to date that Alzheimer’s disease can be slowed, although not stopped, via physical exercise, mental exercises and social interaction, a healthy diet rich in fruits and vegetables, and by monitoring the same risk factors that lead to cardiovascular disease. Matthew Herper of Forbes wrote:

Alzheimer’s is one of the most feared diagnoses among patients. It destroys people’s minds, their personalities, the very essence of who they are. And once the disease has been diagnosed, there is nothing modern medicine can do to stop it.

But it can be slowed, and a new study presented by researchers at the Karolinska Institut in Sweden gives some of the strongest evidence yet as to how.

He emphasized that Alzheimer’s is still inexorable for those who develop it.

However, he wrote, an important result of this study is that even people late in life who are already at high risk for developing the disease can benefit from changing their lifestyle. Patients in this study were between 60 years and 77 years old. Miia Kivipelto, the lead investigator of the study who presented the results at the annual meeting of the Alzheimer’s Association, told Forbes:

This is a very important message. It’s still possible to do something for your brain when you are 70 years old.

Read more about the new results on Alzheimer’s at Forbes