An exotic effect in particle physics, theorized to occur in immense gravitational fields — near a black hole, or in conditions just after the Big Bang — has been seen in laboratory crystal. 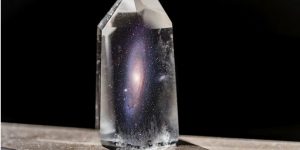 Physicist Johannes Gooth and his team from IBM Research in Zurich, Switzerland, claim to have observed an effect called an axial–gravitational anomaly in a crystal. The effect is predicted by Einstein’s General Relativity, which describes gravity as curved spacetime. The newly observed laboratory effect was thought to be observable only under conditions of immense gravity — for example, near a black hole, or shortly after the Big Bang. Yet it has been seen in a lab. The scientists published their work in the peer-reviewed journal Nature on July 20, 2017.

What is a gravitational anomaly? A good explanation comes from co-author Karl Landsteiner at the IBM Research Blog:

Symmetries are the holy grail for physicists. Symmetry means that one can transform an object in a certain way that leaves it invariant. For example, a round ball can be rotated by an arbitrary angle, but always looks the same. Physicists say it is ‘symmetric under rotations.’ Once the symmetry of a physical system is identified it’s often possible to predict its dynamics.

Sometimes however the laws of quantum mechanics destroy a symmetry that would happily exist in a world without quantum mechanics, i.e classical systems. Even to physicists this looks so strange that they named this phenomenon an ‘anomaly.’

For most of their history, these quantum anomalies were confined to the world of elementary particle physics explored in huge accelerator laboratories such as Large Hadron Collider at CERN in Switzerland …

But now a quantum anomaly has been observed in a lab. Nature said the result bolsters an emerging view that crystals such as these — crystals whose properties are dominated by quantum-mechanical effects – can act as experimental test-beds for physics effects that could be seen otherwise only under exotic circumstances (Big Bang, black hole, particle accelerator). 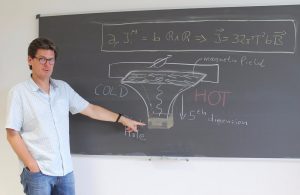 Co-author of the new paper Karl Landsteiner, a string theorist at the Instituto de Fisica Teorica UAM/CSIC, made this graphic to explain the gravitational anomaly. Image via IBM Research.

In advanced science classes, at one point or another, we are taught Lavoisier’s Law. It states that nothing is being created, nothing is being lost, and that all is being transformed. This law – the law of the conservation of mass – is an underlying principle of basic science.

However, when peek into the funky world of quantum materials through high energy physics, the law of the conservation of mass seems to break apart.

Gooth and his team used Einstein’s equation to create an analogy: a change heat (E) is the same as a change in mass (m). In other words, changing the temperature of a Weyl semimetal would be the same as generating a gravitational field.

For the first time, we have experimentally observed this quantum anomaly on Earth which is extremely important towards our understanding of the universe. 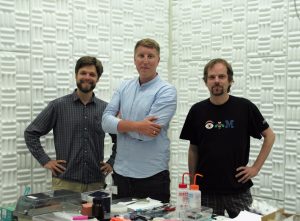 Co-authors of the paper (left to right): Fabian Menges, Johannes Gooth, and Bernd Gotsmann in a noise-free lab at IBM Research, Zurich. Image via IBM Research.

Weyl fermions have been proposed in the 1920s by mathematician Hermann Weyl. They have been very interesting to scientists for some time, for some of their unique properties.

This discovery is considered a spectacular one by many scientists, but not all scientists are convinced. Boris Spivak, physicist at the University of Washington in Seattle, doesn’t believe that an axial-gravitational anomaly could be observed in a Weyl semimetal. He said:

There are many other mechanisms which can explain their data.

As always in science, time will tell. 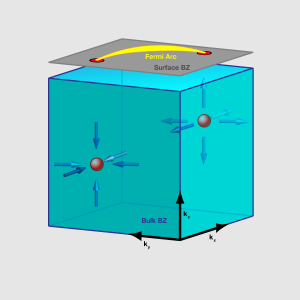 Bottom line: IBM scientists claim to have observed the effects of the axial-gravitational anomaly in a laboratory crystal.