In early 2011, researchers patented a process involving a genetically-modified form of blue-green bacteria that converts sunlight and carbon dioxide directly into diesel fuel.

In early 2011, researchers with the company Joule Unlimited patented a process involving a genetically-modified form of blue-green bacteria that converts sunlight and carbon dioxide directly into diesel fuel. EarthSky spoke with George Church, professor of genetics at Harvard University and a co-founder of the company that’s developing the renewable diesel. He said:

This has been in kind of stealth mode for a few years. Mainly, we didn’t want to raise expectations until we had something. We now have a highly engineered organism.

The process feeds concentrated waste CO2 to a new kind of blue-green bacteria – a highly-engineered type of bacteria, Church said, nothing you would find floating in a pond. The bacteria use the CO2 and sunlight to directly “sweat out” diesel fuel. Church said: 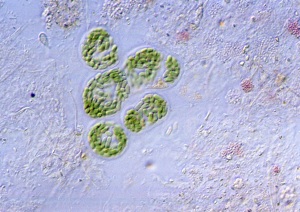 We use very high levels of carbon dioxide that are wastes from industrial products. We use a genetically engineered cyanobacteria and an efficient photobioreactor. And these things sum together in something that’s five to fifty times more efficient than any processes built on biomass.

In other words, Church said his process produces five to fifty times more fuel per acre of bacteria than any current process that uses biomass – plant material – to create fuel. He said the new process can make 15 thousand gallons of diesel per acre annually, even on land unsuitable for food crops. The biggest holdup, said Church, is doing it at large enough scales to really make a difference.

He talked about the main findings of his recent study, called “A new dawn for industrial photosynthesis,” published in he journal Photosynthesis Research.

This is an attempt to do a rigorous comparison of the potential production of two different ways of capturing solar energy and carbon dioxide into usable fuels.

To some extant, algae has been discounted over the years by various groups. And with it, it’s sort of a blanket loss of interest in all sorts of photosynthetic processes. Similarly, there’s been a loss of enthusiasm for corn ethanol. And again, this sort of makes people generalize.

But what this article pursues is a particular model where, instead of algae, where many of the inefficiencies come from having respiration, losing some of your energy to oxygen – here we use very high levels of carbon dioxide that are wastes from industrial products. We use a genetically engineered cyanobacteria and an efficient photobioreactor. And these things sum together in something that’s five to fifty times more efficient than any processes built on biomass.

Church told EarthSky that many of the processes that people thought are the way forward in making biofuels either build a very complicated cellulose mass and then have to break it down again, so energy goes into building it up and tearing it down; or building up an entire mass – the biomass of the organism – and then breaking that back down and extracting the parts you want. But his process, he said is much more like a continuous process

… where you’re making exactly what you want from carbon dioxide. In fact, what you want is a fuel that you can put into engines, instead of making something indirectly related and suffering all the side products.

EarthSky asked Church what is the most important thing he wants people to know about this new process, described as “industrial photosynthesis.” He said:

I think the real potential for industrial photosynthesis that we haven’t touched upon is that this can use marginal land, meaning land that’s not available for conventional crops, so it’s not food versus fuel. It’s actually food plus fuel. You could increase the efficiency of both. Furthermore, we can use water that’s not really usable for anything else. And it’s highly conservative of water because it has almost no evaporative losses. So, from that standpoint, it’s a very important take home in terms decision-making.

Church said that this process that involves a genetically-modified form of blue-green bacteria that converts sunlight and carbon dioxide directly into diesel fuel is a very green alternative to the sorts of processes that produce liquid fuels for cars today.