Gene mashup appears to be promising weapon against malaria

A mosquito-loving fungus, genetically combined with a scorpion toxin, is a recent and apparently promising weapon in the global struggle against malaria.

A mosquito-loving fungus with scorpion genes added to create a malaria-battling toxin might be the latest weapon against the worldwide scourge of malaria.

This stink bug has been infected with a fungus. St. Leger and his team also are creating transgenic fungi designed to control stink bugs, bed bugs, locusts, and other pests. Image Credit: Weiguo Fang, University of Maryland)

Researchers led by Raymond St. Leger from the University of Maryland have spliced the DNA of a human anti-malarial antibody, a mosquito digestive protein, and a scorpion anti-microbial toxin into the DNA of a fungal species that colonizes insects. The strain is called Metarhizium anisopliae. The fungus targets the insect – in this case an Anopheles mosquito – while the products of the borrowed genes target the malarial parasite growing inside of it – a multiple whammy against malaria.

And it seems to work. One version of the genetic mashup reduced malarial parasite numbers in infected mosquitoes by 98%. The team’s success with the cross-phylum gene combinations has made the pages of the February 25 issue of Science.

Malaria is a tricky killer. Of the 255 million cases of malarial infection each year, about 781,000 people die. The parasites can lurk in the liver and recur again and again in the infected person. The standard way to deal with malaria on the mosquito end of things has been to kill the mosquitoes with pesticides. But mosquitoes are like most other abundant organisms: that is, some of them are resistant, and once you’ve knocked off the susceptible bugs, all that are left are resistant ones. This buildup of resistance is exactly what happened when we used DDT against mosquitoes. Learning from such experiences, St. Leger’s group is looking beyond killing the insect “bug” to killing the microbial “bug” inside of it.

The cause of malaria is a species of Plasmodium. These parasites attack only human hosts. They invade our red blood cells to replicate after spending some downtime in the liver. When a mosquito sucks our blood, it sucks up the parasites, male and female, with it. Inside the mosquito, the malarial parasites find true love – males meet females and form a sporogenic state, the sporozoite. The researchers targeted this sporogenic state in their work. 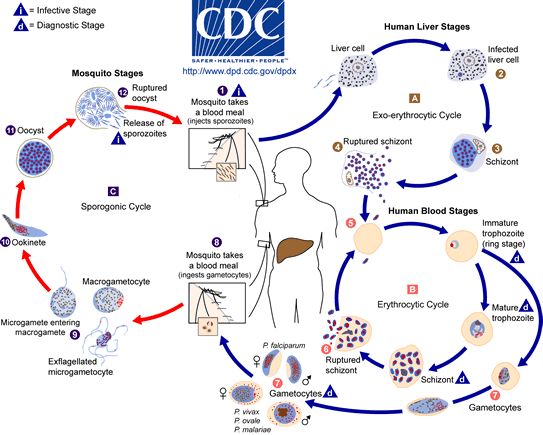 The mosquito digestive protein and the human anti-malarial antibody the scientists used both cause the sporozoites to glob helplessly together, while the scorpion toxin – aptly named scorpine – is an all-around adept microbe killer. Although each of the gene-mashups effectively knocked down malarial sporozoite counts in the fungus-infected mosquitoes, the scorpion toxin knocked it out of the park, reducing counts by 90%. When the investigators then combined the genes for scorpine and the mosquito digestive peptide to make a fusion protein and added this together with another complete scorpine gene, the mosquito sporozoite counts dropped by 98%. 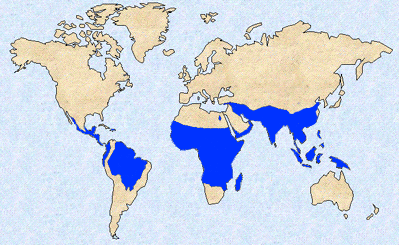 St. Leger noted in a press release from the University of Maryland that this approach to insect pests and microbial killers doesn’t have to be limited to mosquitoes and malaria. In addition to refining the malaria-conquering fungus-scorpion mashup, he and his colleagues are turning their sights to other diseases involving an insect vector, including Lyme disease and sleeping sickness. Even the despised bed bugs may eventually fall into this team’s genetically engineered traps.

One question remains, and that is whether or not the malarial parasite itself might evolve in response to this effective anti-malarial threat. Given that St. Leger’s team has demonstrated three ways to use the Metarhizium anisopliae fungus to target Anopheles mosquitoes and conquer the malarial sporozoite – whether a human antibody, a mosquito digestive protein, or a scorpion toxin – perhaps we’ll be able to stay ahead of Plasmodium‘s ability to evade eradication through resistance.