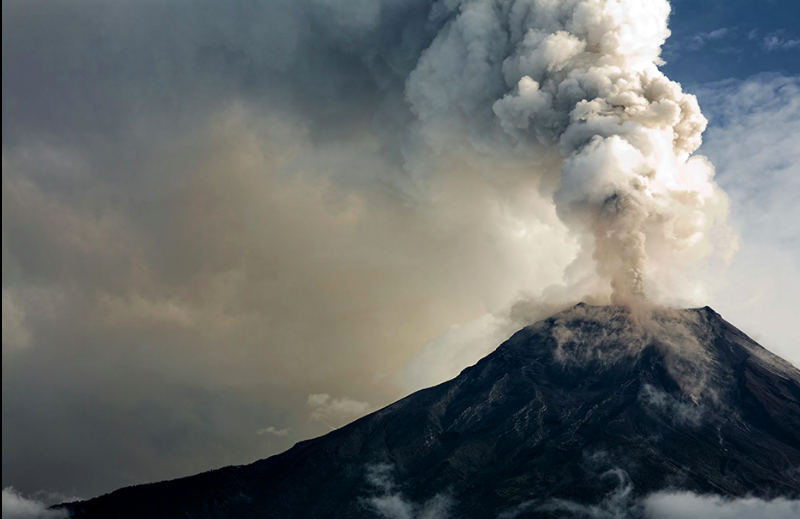 MIT engineers working with scientists in Kuwait have found that volcanic rocks, when pulverized into a fine ash, can be used as a sustainable additive in concrete structures.

In a paper published online in the Journal of Cleaner Production, the researchers report that, by replacing a certain percentage of traditional cement with volcanic ash, they can reduce a concrete structure’s embodied energy, or the total energy that goes into making concrete. According to their calculations, it takes 16 percent less energy to construct a pilot neighborhood with 26 concrete buildings made with 50 percent volcanic ash, compared with the energy it takes to make the same structures entirely of traditional Portland cement.

When they ground volcanic ash down to increasingly small particle sizes, the researchers found that a mixture of the finer powder and Portland cement produced stronger concrete structures, compared with those made from cement alone. However, the process of grinding volcanic ash down to such fine particles requires energy, which in turn increases the resulting structure’s embodied energy. There is, then, a tradeoff between a concrete structure’s strength and its embodied energy, when volcanic ash is used.

Based on experiments with various concrete and volcanic ash mixtures, and calculations of the resulting structure’s embodied energy, the researchers have mapped out the relationship between strength and embodied energy. They say engineers can use this relationship as a blueprint of sorts to help them choose, for instance, the percent of cement they would want to replace with volcanic ash to produce a given structure.

Oral Buyukozturk is a professor in MIT’s Department of Civil and Environmental Engineering (CEE) and an author of the paper. Buyukozturk said:

You can customize this. If it is for a traffic block, for example, where you may not need as much strength as, say, for a high-rise building. So you could produce those things with much less energy. That is huge if you think of the amount of concrete that’s used over the world.

Buyukozturk is joined on a paper by an interdisciplinary team of researchers, including research scientist Kunal Kupwade-Patil and undergraduate Stephanie Chin of CEE, former doctoral student Catherine De Wolf and Professor John Ochsendorf of MIT’s Department of Architecture, Ali Hajiah of the Kuwait Institute for Scientific Research, and Adil Al-Mumin of Kuwait University.

Concrete is the most abundantly used material in the world, second only to water. The manufacturing of concrete involves first blasting rocks such as limestone out from quarries, then transporting the rocks to mills, where they are further crushed and treated under high temperature through various processes resulting in the production of cement.

Such energy-intensive processes create a significant environmental footprint; the production of traditional Portland cement accounts for about 5 percent of the world’s carbon dioxide emissions. To cut down on these emissions, Buyukozturk and others have been looking for sustainable additives and alternatives to cement.

Volcanic ash has several sustainable advantages as an additive in manufacturing concrete: The rocky material, which lies in ample supply around active and inactive volcanoes around the world, is naturally available; it is typically considered a waste material, as people typically do not use it for any widespread purpose; some volcanic ashes have intrinsic, “pozzolonic” properties, meaning that, in powder form, the ash with a reduced amount of cement can naturally bind with water and other materials to form cement-like pastes.

Stephanie Chin, with Kupwade-Patil, led much of the group’s experimental work as a student in the Undergraduate Research Opportunities Program (UROP) with Buyukozturk. She said:

Cement production takes a lot of energy because there are high temperatures involved, and it’s a multistage process. That’s the main motivation for trying to find an alternative. Volcanic ash forms under high heat and high pressure, and nature kind of does all those chemical reactions for us.

The team looked first at how much energy it would take to make concrete from a mixture of cement and volcanic ash, versus cement alone. To do this, the researchers consulted several databases in which others had calculated the embodied energy associated with various industrial processes, such as the energy that goes into crushing rock or curing cement. The researchers picked through the databases to assemble the individual processes associated with producing traditional cement and cement containing 10 to 50 percent volcanic ash.

They then went into the lab, where they manufactured small samples of concrete with various percentages of volcanic ash, as well as samples made only of Portland cement. Chin and her colleagues subjected each sample to standard tests of strength, such as compressing the structures until they began to crack. Then they mapped out each sample’s strength against its calculated embodied energy.

The team extrapolated its results to see how structures made partly with volcanic ash would affect concrete’s embodied energy at the scale of entire buildings and neighborhoods.

The researchers focused on a neighborhood in Kuwait with 13 residential and 13 commercial buildings, all made with traditional Portland cement, mostly imported from Europe. With the help of their collaborators in Kuwait, they flew a drone over the neighborhood to collect images and measurements. They also consulted local authorities, who provided them with additional information on each building system.

Using all this information, the team calculated the neighborhood’s existing embodied energy, and then calculated how that embodied energy would change if buildings were made with concrete composed of various percentages of volcanic ash, which is in ample supply in the Middle East.

As with their experiments in the lab, they found that a neighborhood’s infrastructure can be made with considerably less energy if the same buildings are built with concrete made from a cement mixture that is 30 percent volcanic ash. Buyukozturk said:

What we’ve found out is that concrete can be manufactured with natural additives with desired properties, and reduced embodied energy, which can be translated into significant energy savings when you are creating a neighborhood or a city.

Bottom line: A team of scientists and engineers have found that volcanic ash can be used as a sustainable additive in concrete structures.