Baumgartner’s jump came 65 years to the day after Chuck Yeager broke the sound barrier in a plane. But Baumgartner went supersonic using just his body.

GoPro has released the full video of daredevil Felix Baumgartner’s successful leap from a capsule more than 24 miles – nearly 39 kilometers – above Earth’s surface on October 14, 2012. It was a new world’s record, one of several Baumgartner broke that day.

Baumgartner fell faster than anyone before, breaking the speed of sound in his plunge, before landing safely back on Earth. He dropped for 4 minutes 19 seconds and reached a maximum speed of 1,137 kilometers per hour (706 miles per hour). He became the first man to break the speed of sound in freefall, reaching an estimated speed of 1357.64 km/h (843.6 mph), or Mach 1.25. The Red Bull Stratos Mission to the Edge of Space, as it was called, culminated when Baumgartner opened his capsule high above Roswell, New Mexico and stepped off a platform. Shortly after landing safely, he attended a press conference in Roswell, where he said:

The 43-year-old Austrian skydiving expert said the most exciting moment of the jump took place as he stood on the platform, moments before his plunge.

Baumgartner’s jump came 65 years to the day after Chuck Yeager broke the sound barrier at more than 30,000 feet above California’s Mojave Desert. That happened on October 14, 1947. But Baumgartner went supersonic using just his body.

The 43-year-old skydiving expert also broke two other world records (highest freefall, highest manned balloon flight). The record for longest freefall remains with Joe Kittinger, who was a mentor to Baumgartner in this project. 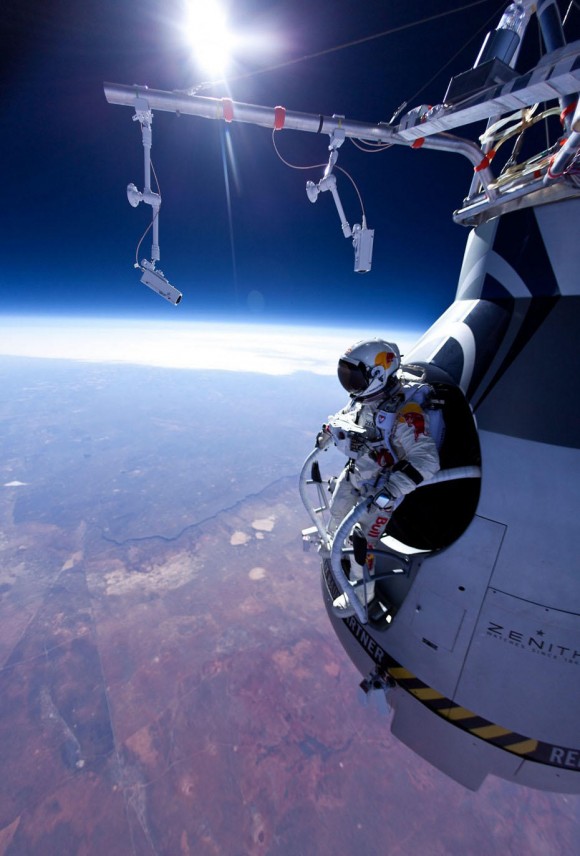 Daredevil Felix Baumgartner on October 14, 2012 poised for a leap to Earth, 24 miles (39 kilometers) above Earth’s surface. 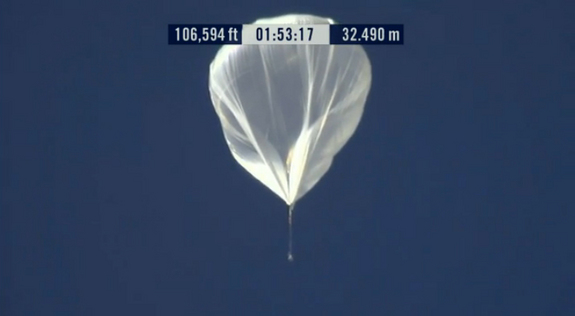 Baumgartner was lifted high into the atmosphere in a specially-made capsule attached to one of the largest helium balloons ever used for human balloon flights. 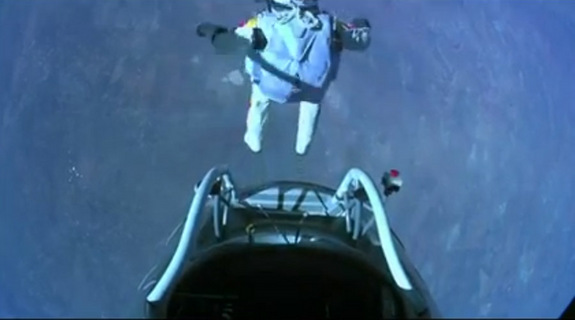 Video still of Felix Baumgartner at the moment of his leap off a platform, 24 miles (39 kilometers) above Earth.

Bottom line: After flying to an altitude of 39,044 meters (128,097 feet) in a helium-filled balloon, Austrian daredevil Felix Baumgartner completed a record-breaking jump from the edge of space on October 14, 2012. In February 2014, GoPro released the full 8-minute video of the event.