The reach of forensic science’s is being extended back from crime scenes into prehistory to help unlock the mysteries of human evolution. 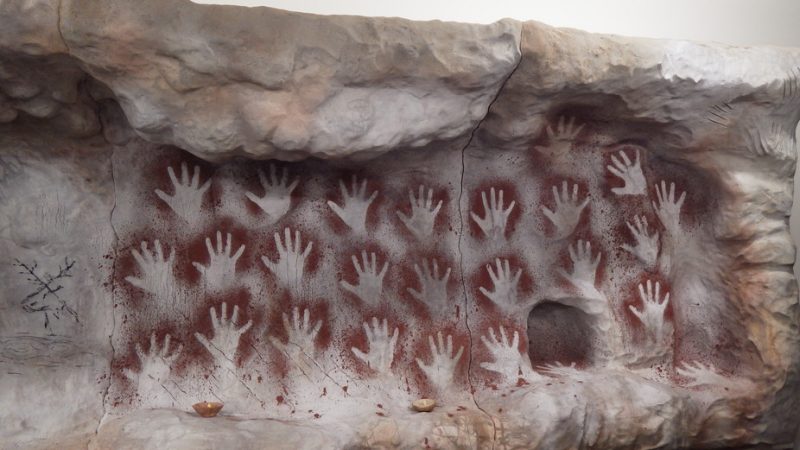 People are fascinated by the use of forensic science to solve crimes. Any science can be forensic when used in the criminal and civil justice system – biology, genetics and chemistry have been applied in this way. Now something rather special is happening: the scientific skill sets developed while investigating crime scenes, homicides and mass fatalities are being put to use outside the courtroom. Forensic anthropology is one field where this is happening.

Loosely defined, forensic anthropology is the analysis of human remains for the purpose of establishing identity in both living and dead individuals. In the case of the dead this often focuses on analyses of the skeleton. But any and all parts of the physical body can be analysed. The forensic anthropologist is an expert at assessing biological sex, age at death, living height and ancestral affinity from the skeleton.

Our newest research has extended forensic science’s reach from the present into prehistory. In the study, published in the Journal of Archaeological Science, we applied common forensic anthropology techniques to investigate the biological sex of artists who lived long before the invention of the written word.

We specifically focused on those who produced a type of art known as a hand stencil. We applied forensic biometrics to produce statistically robust results which, we hope, will offset some of the problems archaeological researchers have encountered in dealing with this ancient art form.

Ancient hand stencils were made by blowing, spitting or stippling pigment onto a hand while it was held against a rock surface. This left a negative impression on the rock in the shape of the hand. 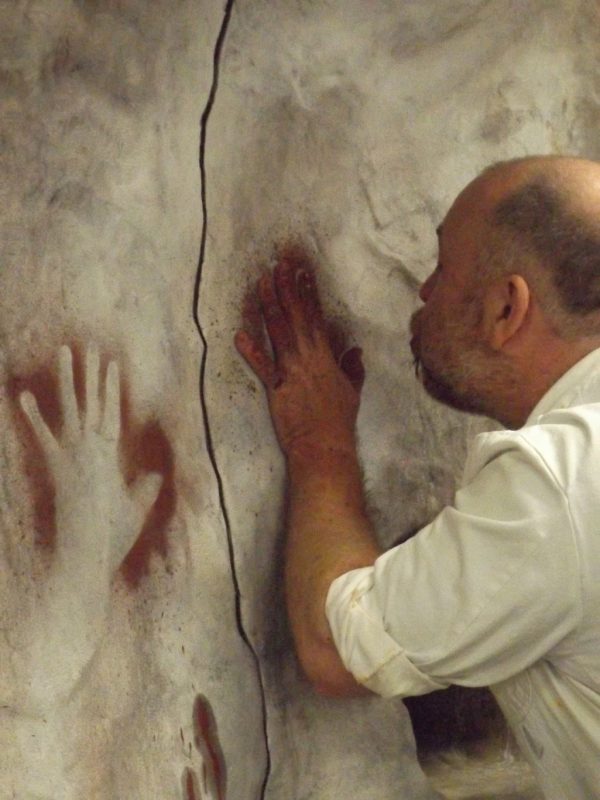 Experimental production of a hand stencil. Image via Jason Hall, University of Liverpool

These stencils are frequently found alongside pictorial cave art created during a period known as the Upper Palaeolithic, which started roughly 40 000 years ago.

Archaeologists have long been interested in such art. The presence of a human hand creates a direct, physical connection with an artist who lived millennia ago. Archaeologists have often focused on who made the art – not the individual’s identity, but whether the artist was male or female.

Until now, researchers have focused on studying hand size and finger length to address the artist’s sex. The size and shape of the hand is influenced by biological sex as sex hormones determine the relative length of fingers during development, known as 2D:4D ratios.

But many ratio-based studies applied to rock art have generally been difficult to replicate. They’ve often produced conflicting results. The problem with focusing on hand size and finger length is that two differently shaped hands can have identical linear dimensions and ratios.

To overcome this we adopted an approach based on forensic biometric principles. This promises to be both more statistically robust and more open to replication between researchers in different parts of the world.

The study used a branch of statistics called Geometric Morphometric Methods. The underpinnings of this discipline date back to the early 20th century. More recently computing and digital technology have allowed scientists to capture objects in 2D and 3D before extracting shape and size differences within a common spatial framework.

In our study we used experimentally produced stencils from 132 volunteers. The stencils were digitised and 19 anatomical landmarks were applied to each image. These correspond to features on the fingers and palms which are the same between individuals, as depicted in figure 2. This produced a matrix of x-y coordinates of each hand, which represented the shape of each hand as the equivalent of a map reference system. 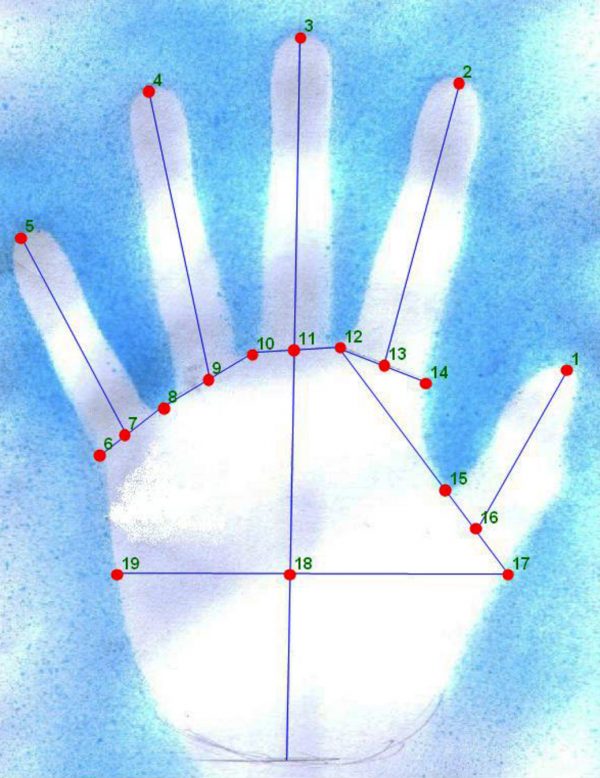 We used a technique called Procrustes superimposition to move and translate each hand outline into the same spatial framework and scale them against each other. This made the difference between individuals and sexes objectively apparent.

Procrustes also allowed us to treat shape and size as discrete entities, analysing them either independently or together. Then we applied discriminant statistics to investigate which component of hand form could best be used to assess whether an outline was from a male or a female. After discrimination we were able to predict the sex of the hand in 83% of cases using a size proxy, but with over 90% accuracy when size and shape of the hand were combined.

An analysis called Partial Least Squares was used to treat the hand as discrete anatomical units; that is, palm and fingers independently. Rather surprisingly the shape of the palm was a much better indicator of the sex of the hand than the fingers. This goes counter to received wisdom.

This would allow us to predict sex in hand stencils which have missing digits – a common issue in Palaeolithic rock art – where whole or part fingers are often missing or obscured.

This study adds to the body of research that has already used forensic science to understand prehistory. Beyond rock art, forensic anthropology is helping to develop the emergent field of palaeo-forensics: the application of forensic analyses into the deep past.

For instance, we have been able to understand fatal falls in Australopithecus sediba from Malapa and primitive mortuary practices in the species Homo naledi from Rising Star Cave, both in South Africa.

All of this shows the synergy that arises when the palaeo, archaeological and forensic sciences are brought together to advance humans’ understanding of the past.