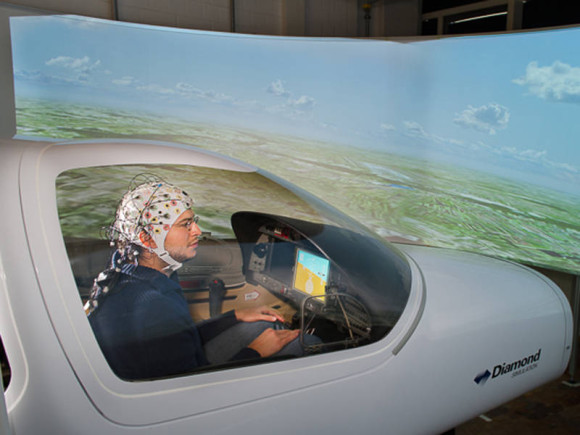 Pilots of the future could be able to control their aircraft by merely thinking commands. Scientists have now demonstrated the feasibility of flying via brain control – with astonishing accuracy.

The pilot is wearing a white cap with myriad attached cables. His gaze is concentrated on the runway ahead of him. All of a sudden the control stick starts to move, as if by magic. The airplane banks and then approaches straight on towards the runway. The position of the plane is corrected time and again until the landing gear gently touches down. During the entire maneuver the pilot touches neither pedals nor controls.

This is not a scene from a science fiction movie, but rather the rendition of a test at the Institute for Flight System Dynamics of the Technische Universität München (TUM). Scientists working for Professor Florian Holzapfel are researching ways in which brain controlled flight might work in the EU-funded project “Brainflight.” “A long-term vision of the project is to make flying accessible to more people,” explains aerospace engineer Tim Fricke, who heads the project at TUM. “With brain control, flying, in itself, could become easier. This would reduce the work load of pilots and thereby increase safety. In addition, pilots would have more freedom of movement to manage other manual tasks in the cockpit.”

The scientists have logged their first breakthrough: They succeeded in demonstrating that brain-controlled flight is indeed possible – with amazing precision. Seven subjects took part in the flight simulator tests. They had varying levels of flight experience, including one person without any practical cockpit experience whatsoever. The accuracy with which the test subjects stayed on course by merely thinking commands would have sufficed, in part, to fulfill the requirements of a flying license test. “One of the subjects was able to follow eight out of ten target headings with a deviation of only 10 degrees,” reports Fricke. Several of the subjects also managed the landing approach under poor visibility. One test pilot even landed within only few meters of the centerline.

The TU München scientists are now focusing in particular on the question of how the requirements for the control system and flight dynamics need to be altered to accommodate the new control method. Normally, pilots feel resistance in steering and must exert significant force when the loads induced on the aircraft become too large. This feedback is missing when using brain control. The researchers are thus looking for alternative methods of feedback to signal when the envelope is pushed too hard, for example.

In order for humans and machines to communicate, brain waves of the pilots are measured using electroencephalography (EEG) electrodes connected to a cap. An algorithm developed by scientists from Team PhyPA (Physiological Parameters for Adaptation) of the Technische Universität Berlin allows the program to decipher electrical potentials and convert them into useful control commands.

Only the very clearly defined electrical brain impulses required for control are recognized by the brain-computer interface. “This is pure signal processing,” emphasizes Fricke. Mind reading is not possible.