An expert in atmospheric dynamics and aviation meteorology comments on the mysterious disappearance of Malaysia Airlines Flight 370.

The mystery behind Malaysia Airlines Flight 370 is likely the most complex story in aviation history. It has been two weeks since the airplane mysteriously vanished. Where did the plane go? How did people not see it? If it crashed or exploded, wouldn’t we have known about it or seen signs of it from satellites or radars? Despite satellite images possibly showing an object in the Indian ocean from the Chinese and Australian governments, the mystery continues. I spoke with meteorologist and University of Georgia Associate Professor Dr. John Knox about the disappearance of Flight 370. Knox specializes on atmospheric dynamics and aviation meteorology. He said:

I asked Knox if he could recall another plane incident similar to the disappearance of the Malaysian plane. He said the only case that was somewhat similar was the case of the Air France Flight 447. It disappeared in the Atlantic in 2009, as it traveled from Brazil to Paris, France. In that case, the plane stalled and fell into the Atlantic. Knox said:

The bottom line is that Air France case was one where you would never expect a modern airliner to be able to put itself into a catastrophic stall and crash into the middle of the Atlantic, but that’s what happened. So, I think whatever happened in this case its going to be one of those who-would-have-thunk it cases that’s going to make us rethink airline safety. 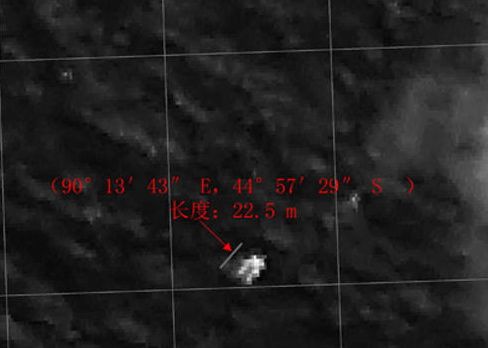 A new satellite image, released on Saturday by China, has revealed another large object floating in a remote patch of the southern Indian Ocean. It appears to be 70 feet long and 40 feet wide. Is it related to the missing jet? Image via CBSNews

Flight 370 went missing on the early morning hours of March 8, 2014. Initially, the biggest question on the disappearance of the plane was if it was weather related. But the main weather story across the Gulf of Thailand, South China Sea, and even the Indian Ocean that day was the area of high pressure providing warm, tranquil conditions. Very little wind shear was identified as you go up into the atmosphere, so turbulence was practically out of the question. The airplane used in Flight 370 – a Boeing 777 – was in an ideal situation for a non-turbulent flight.

A Boeing 777 has computer-mediated controls, and it is also the first entirely computer-designed commercial aircraft. It is a very safe aircraft. For example, it contains two giant engines. If one engine fails, the other engine can substitute and sustain the aircraft in the air. We can speculate on several rumors as to why the plane is missing, but for now, no one has any clue as to what exactly happen. 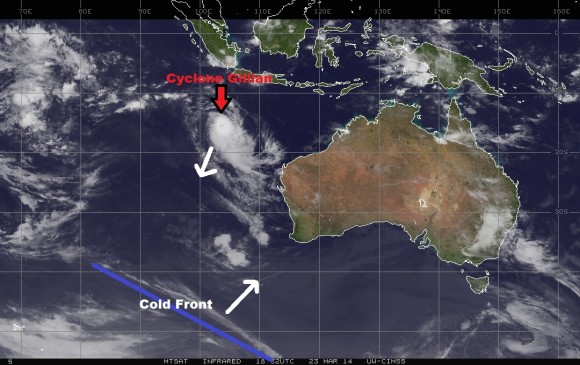 Cyclone Gillian and a series of cold fronts could cause problems in the southern Indian Ocean as the week of March 25 begins, for nations of the world searching for the missing jet. Image via CIMSS

What about the search effort? How will current weather affect the ongoing search? With winds pounding the southern Indian Ocean, and ocean currents that can move debris quickly, efforts on finding any kind of evidence that the plane crashed into open waters there remain a challenge. The plane could be on land in Asia or as far south as the Indian Ocean. Very strong winds around 40 to 50 knots will push into the search area Monday night into Tuesday morning as another strong cold front pushes northward.

After two weeks of very few leads and updates of the missing plane, theories continue to mount. Whether it was a computer/electrical issue or human intervention, only time will tell.

Ocean wave currents in the search for Malaysia Air Flight 370

Read more: The world is surprisingly good at salvaging plane wreckage from the ocean depths