First photo of light as particle and wave

At last … a wavicle! Who thought we’d ever see a single photo of light’s dual nature as both a particle and a wave? 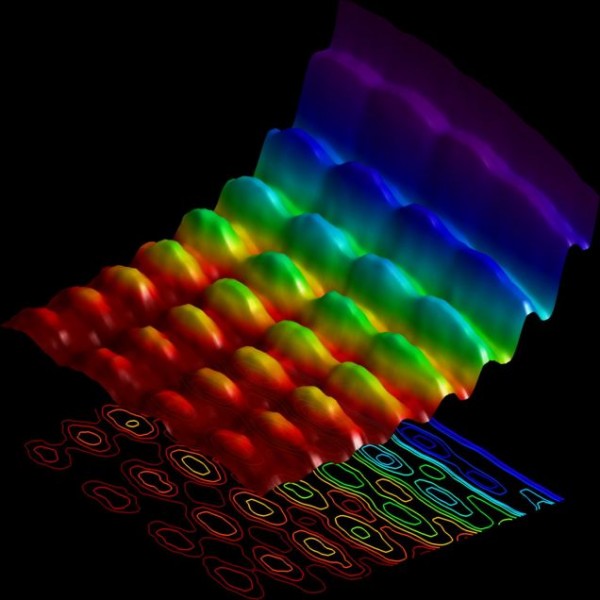 This image shows the dual nature of light – its property of being both a wave and a particle – a property known since 1905, but never before witnessed in this way by human eyes.

According to a statement from EPFL:

When UV light hits a metal surface, it causes an emission of electrons. Albert Einstein explained this “photoelectric” effect by proposing that light—thought to only be a wave—is also a stream of particles. Even though a variety of experiments have successfully observed both the particle- and wave-like behaviors of light, they have never been able to observe both at the same time.

A research team led by Fabrizio Carbone at EPFL has now carried out an experiment with a clever twist: using electrons to image light. The researchers have captured, for the first time ever, a single snapshot of light behaving simultaneously as both a wave and a stream of particles particle.

The experiment is set up like this: A pulse of laser light is fired at a tiny metallic nanowire. The laser adds energy to the charged particles in the nanowire, causing them to vibrate. Light travels along this tiny wire in two possible directions, like cars on a highway. When waves traveling in opposite directions meet each other they form a new wave that looks like it is standing in place. Here, this standing wave becomes the source of light for the experiment, radiating around the nanowire.

This is where the experiment’s trick comes in: The scientists shot a stream of electrons close to the nanowire, using them to image the standing wave of light. As the electrons interacted with the confined light on the nanowire, they either sped up or slowed down. Using the ultrafast microscope to image the position where this change in speed occurred, Carbone’s team could now visualize the standing wave, which acts as a fingerprint of the wave-nature of light.

While this phenomenon shows the wave-like nature of light, it simultaneously demonstrated its particle aspect as well. As the electrons pass close to the standing wave of light, they “hit” the light’s particles, the photons. As mentioned above, this affects their speed, making them move faster or slower. This change in speed appears as an exchange of energy “packets” (quanta) between electrons and photons. The very occurrence of these energy packets shows that the light on the nanowire behaves as a particle.

Click here to read the entire statement from EPFL

Of course, not all scientists agree with the statement of the scientists at EPFL, that they have observed light as a particle and a wave at the same time. Read Brian Koberlein’s view of this subject.

Bottom line: Modern scientists fully accept the wave-particle duality of light. But who thought we’d ever see a photo of light as both a particle and a wave? A team of scientists based in Europe at the Ecole Polytechnique Fédérale de Lausanne (EPFL) has created this image. The journal Nature Communications published it on March 2, 2015.