A flurry of studies suggests that this lost world could have been an ice age haven, dotted with game and wildflowers, for both animals and humans.

Scientists have uncovered new evidence in support of a theory that some Native Americans may be descendants of a population from northeast Asia that lived during the last Ice Age – in isolation, for several thousand years – on the Bering Land Bridge (also known as Beringia). The scientists’ analysis of core samples from the now-partly-submerged land bridge shows traces of vegetation and insects, suggesting that the area was once a tundra region with mild summers. Their results were published in the February 28, 2014 issue of the journal Science. They wrote:

Archaeologists once considered Beringia, a now partly submerged landmass that once stretched from Siberia to northern Canada, as chiefly a highway between continents. Now, a flurry of studies suggests that this lost world could have been an ice age haven, dotted with game and wildflowers, for both animals and humans. According to one model, the ancestors of today’s Native Americans may have stayed in Beringia for thousands of years before coming to the Americas. 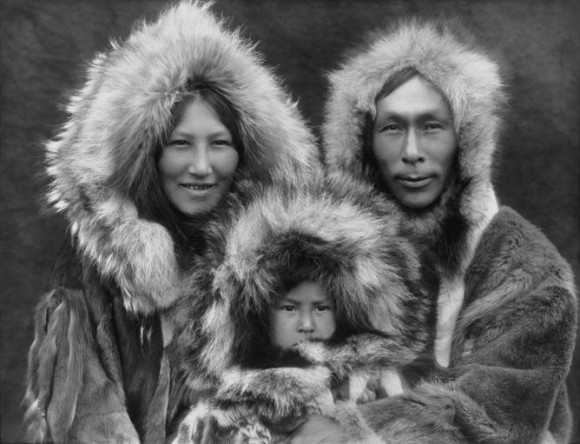 An Inupiat Eskimo family from Alaska in 1929, whose ancestors might have crossed Beringia thousands of years previously. Image and caption via The Conversation. 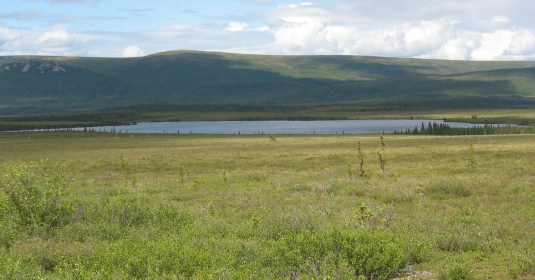 During the last Ice Age, Beringia may have looked similar to Alaska’s modern-day shrub tundra. This image, from Eight Mile Lake at the foothills of the Alaska Range, shows birch shrubs in the foreground and scattered spruce trees. Image courtesy of Nancy Bigelow, University of Alaska, Fairbanks.

Archaeologists believe that humans first entered North America about 15,000 years ago, towards the end of the last Ice Age. As ice sheets retreated north, new coastal and inland access was opened into the New World.

Before that happened, it’s possible that people spent more than 5,000 years living in isolation in the area now known as the Bering Land Bridge. Scientists first proposed this theory, known as the Beringia Standstill, in 1997. Ten years later, other scientists conducted an analysis of mitochondrial DNA (mtDNA) from more than 600 Native Americans. That analysis revealed a series of mtDNA mutations that accumulated when people, originally from Siberia, lived in isolation for several thousand years, before dispersing into the Americas.

Now partly submersed under the Bering Sea, Beringia was once a swath of land that may have been about 600 miles (1,000 km) wide, stretching from Siberia to Alaska.

At the height of the last Ice Age – 21,000 years ago – massive amounts of fresh water were locked away in vast ice fields that covered much of northern North America and Europe. As a result, sea level was much lower. Large expanses of continental shelves were exposed, including the Bering Land Bridge that linked Siberia to Alaska.

An animation showing the geological history of the Bering Land Bridge

Dennis O’Rourke, at the University of Utah, is a co-author of the Science paper. He said, in a press release:

The genetic record has been very clear for several years that the Native American genome must have arisen in an isolated population at least by 25,000 years ago, and the bulk of the migrants to the Americas really didn’t arrive south of the ice sheets until nearly 15,000 years ago. The paleoecological data, which I think most geneticists have not been familiar with, indicate that Beringia was not a uniform environment, and there was a shrub tundra region, or refugium, that likely provided habitats conducive to continuous human habitation.

John Hoffecker, at the University of Colorado, Boulder, the lead author of the paper, commented in the same press release:

A number of supporting pieces have fallen in place during the last decade, including new evidence that central Beringia supported a shrub tundra region with some trees during the last glacial maximum and was characterized by surprisingly mild temperatures, given the high latitude.

The climate on the land bridge and adjacent parts of Siberia and Alaska was a bit wetter than the interior regions like central Alaska and the Yukon, but not a lot warmer. Our data show that woody shrubs were available on the land bridge, which would have facilitated the making of fires by the people there.

Sediment cores from the now-submerged Beringia, collected by the researchers, were found to contain fossil pollen, plant, and insect remains. It revealed that the Bering Land Bridge was once a tundra with woody plants such as birch, willow and alder, which provided wood to supplement bones as fuel.

Of particular interest were beetle species found only in habitats with specific temperatures ranges. These beetles showed that conditions in the area were quite mild during the last glacial maximum from 27,000 to 20,000 years ago, only slightly cooler than current-day temperatures.

Despite its high latitude, Beringia had a mild summer climate due to moist warmer air transported northward by the North Pacific circulation pattern. Several hundreds or thousands of people, researchers believe, could have lived in central Beringia for more than 5,000 years. The new evidence shows there was enough wood to supplement bone as fuel. During the last Ice Age, the ancient inhabitants of Beringia may have hunted steppe-tundra regions to their east and west for bison, horse, and mammoth.

Even though there is no direct archaeological evidence of human populations in the now submerged Beringia, Hoffecker is hopeful that additional research in submerged areas, as well as lowlands of western Alaska and eastern Siberia currently above sea level, may hold more clues about these ancient people of the Beringia Standstill that eventually spread out to settle the Americas.

Bottom Line: Sediment core samples from now-submerged areas of the Bering Land Bridge, that once connected Siberia and Alaska, show traces of vegetation and insects that indicates it was a tundra region with mild summers, suitable living conditions for early Americans that may have lived there for several thousand years before dispersing into the Americas. These finding were were published in the February 28, 2014, issue of Science.