How hard is it to spoof a ship’s navigation system into believing false GPS signals, deliberately leading it off its charted course? Not that hard, apparently.

How hard is it to spoof a ship’s navigation system into believing false GPS signals, deliberately leading it off its charted course? An engineering research team from the University of Texas at Austin this summer demonstrated a “proof of concept” that a subtle form of high-tech commandeering, using false GPS signals to maneuver a ship off its intended route, could be a serious threat to maritime safety. The use of false GPS signals for this purpose is known as GPS spoofing.

Todd Humphreys from UT’s Cockrell School of Engineering led the team that successfully performed the invited GPS spoofing attacks earlier this summer (June 2013). Their target was the White Rose of Drachs, an $80 million 213-foot private yacht, which was, at the time, moving in international waters about 30 miles off the coast of Italy. As described in a press release on July 29, 2013, graduate students Jahshan Bhatti and Ken Pesyna began the experiment from the upper deck of the yacht, transmitting carefully devised false faint GPS signals from a device they made that was about the size of a briefcase. These false signals, received by the yacht’s two GPS antennas, then gradually overpowered the real GPS signals. 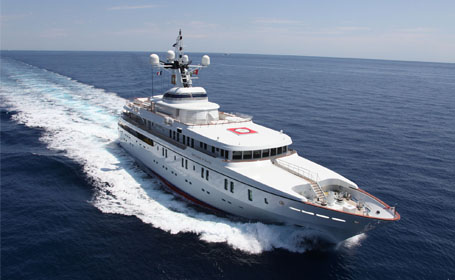 This summer, assistant professor Todd Humphreys and his research team successfully performed GPS spoofing attacks on the White Rose of Drachs superyacht (shown above) while it traveled on the Mediterranean Sea. Image and caption via UT Austin.

Simulation of the original 24 GPS satellites in orbit. Image via El pak via Wikimedia Commons.

Essentially, the team placed a false latitude and longitude ground coordinate system in the yacht’s navigation system. Even though the yacht had been maintaining its original course, from the crew’s perspective, the new false coordinate system made their sensors indicate that the yacht was veering off its original path. Therefore, they initiated a course correction, tweaking the yacht’s location to what they thought was the correct path. Humphreys said in the press release:

The ship actually turned and we could all feel it, but the chart display and the crew saw only a straight line.

After a few more furtive false GPS signal uploads, which resulted in the yacht’s making more course corrections, Humphreys and his team succeeded in placing the yacht in a parallel path several hundred meters away from where it was supposed to be located. Meanwhile, unaware of the changes, the crew believed they were maintaining their original route. Humphreys said:

With 90 percent of the world’s freight moving across the seas and a great deal of the world’s human transportation going across the skies, we have to gain a better understanding of the broader implications of GPS spoofing. I didn’t know, until we performed this experiment, just how possible it is to spoof a marine vessel and how difficult it is to detect this attack.

The animation below shows how the White Rose of Drachs was led off-course by a GPS spoofing device created by University of Texas at Austin engineers.

This experiment is applicable to other semi-autonomous vehicles, such as aircraft, which are now operated, in part, by autopilot systems. We’ve got to put on our thinking caps and see what we can do to solve this threat quickly.

The Global Positioning System, GPS for short, is a navigation system that uses a fleet of satellites to determine the geographical position of a GPS receiver on the ground. That receiver could be a range of devices from a sophisticated aircraft navigation system to your iPhone. The receiver uses signals from several satellites to determine the satellites’ positions in space and actual distance from the receiver. This data is used to compute the latitude and longitude of the receiver on the ground.

Bottom line: An engineering research team from the University of Texas at Austin led by Todd Humphreys demonstrated in June 2013 that it’s possible for false GPS signals to be fed into a ship’s navigating system, unknowingly manipulating it into a different course. The use of false GPS signals for this purpose is known as GPS spoofing. This vulnerability in GPS navigation systems could be a potential threat to transportation security.