Weather Underground’s Jeff Masters on the science of the deadly April tornadoes in the U.S. – this week on EarthSky 22, your 22 minutes of science and music. Just press play. 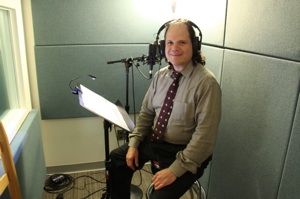 Jorge Salazar getting ready for the 22

Tornadoes. Meteorologist Jeff Masters of Weather Underground on what caused the tornadoes of April 2011, which were among the largest and deadliest in U.S. history. He also discusses the relationship between climate change and extreme weather events.

Weird Science with Ryan Britton. Does having fun affect your memory? It sure does … Ryan Britton explains.

Rogue Waves. Beth Lebwohl speaks with Lev Kaplan about the physics of freak waves that appear out of nowhere.

Pulitzer Prize-winning Harvard biologist E.O. Wilson talks about the future of science in the 21st century.