EarthSky 22: High fives to our musical contributor … plus find Saturn

It’s the best time of year to see Saturn. Woot! The 22 tells you how. Just press play. 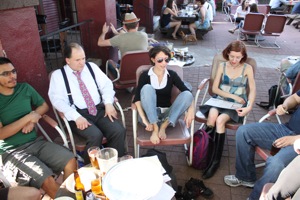 ES team chillaxin\’ after a hard day on the global science beat. Next week: more pics from when the party really got going. :-)

Global Night Sky. Skywatcher Deborah Byrd on how to spot the planet Saturn this month.

Give me 5 minutes, I’ll give you Saturn