Using drone reconnaissance and satellite imaging, archaeologists have discovered an ancient irrigation system in an arid part of northwest China along the Silk Road. The irrigation system, said researchers, allowed a farming community to raise livestock and cultivate crops in one of the world’s driest desert climates.

The Silk Road was an ancient trade route linking China with the West, that carried goods and ideas between the two great civilizations of Rome and China. Yuqi Li, a doctoral student at Washington University was investigating development along the Silk Road when he discovered the site.

Lost for centuries in the barren foothills of China’s Tian Shan Mountains, the remains of the ancient farming community are hidden in plain sight — appearing as little more than an odd scattering of round boulders and sandy ruts when viewed from the ground.

Preliminary analysis, published in the December 2017 issue of the journal Archaeological Research in Asia, suggests that the irrigation system was built in the 3rd or 4th century A.D. by local herding communities looking to add more crop cultivation to their mix of food and livestock production. 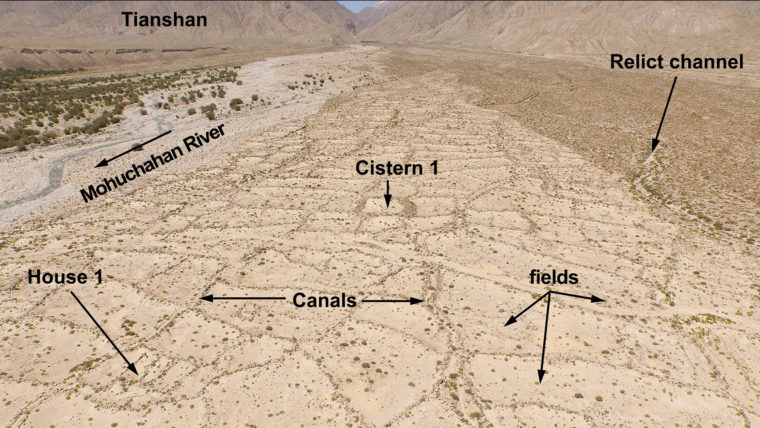 Aerial view of an ancient irrigation system discovered in the foothills of Xinjiang, China. Image courtesy of Archaeological Research in Asia.