Don’t enjoy your fruit with a coating of slime and fur? Fine then, that just leaves more for the microbes.

In the late 1970s, biologist Daniel Janzen suffered the indignity of cutting into a rotten avocado. Understandably displeased with the experience, he retaliated as any reasonable scientist would – by publishing a paper in The American Naturalist, entitled, “Why fruits rot, seeds mold, and meat spoils.” The slime, stink, and overall ick produced by microorganisms as they nibbled on our would-be-meals, Janzen hypothesized, were not simply arbitrary byproducts of microbial metabolism, they were deliberate adaptations meant to keep larger organisms (including humans) away. Like a greedy sibling who makes a point of licking a cookie before biting into it so they won’t have to share, spoilage microbes are rendering food gross on purpose, those jerks. (A bit of artistic license on my part with the paraphrase, but you get the idea.) Though in the case of microbes, sharing isn’t really an option. When a bear eats a piece of fruit, it tends to gobble the whole thing, microorganisms and all. So if you’re a mold or bacteria sitting in a patch of berries and you want to stay alive, your best bet is to be perched on the most inedible specimen there. Thus the spoilage.

Intuitively, Janzen’s idea makes sense to anyone who’s ever accidentally left a bowl of dip on the coffee table overnight. But in science, a clever idea with no supporting data isn’t much use. At the very least you should have a mathematical model. Unfortunately, a 2006 attempt to model Janzen’s hypothesis failed to show that microbes that go out of their way to make edibles unpalatable would have any evolutionary advantage over those that dined in tidy anonymity. But now another team of researchers (including two folks from the 2006 group) have taken up the task again and, by George, they think they’ve got it. Published in the Proceedings of the Royal Society B, their new model makes small but critical adjustments to the earlier version, and things seem to fall into place as a result. 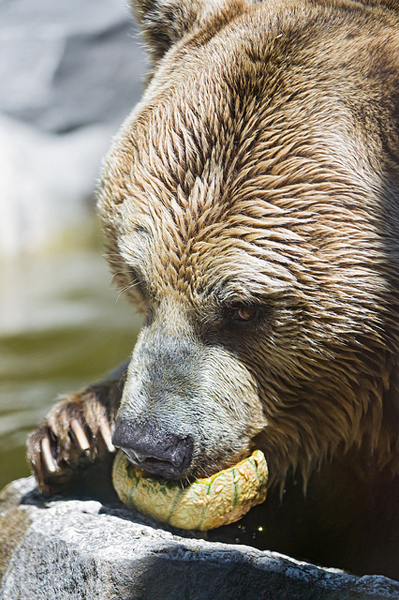 Don’t let this happen to you, non-spoilers. Image: Tambako the Jaguar.

The model used in the 2006 paper made the assumption that fruiting plants (both papers use fruit for their models, so we’re doing likewise) could host both “spoilers” and “non-spoilers” simultaneously, and that the wide dispersal of these microbes would assure that any individual fruit would contain a mixture of both types. If this were the case, spoilers would invest valuable energy into rendering their fruity home/food supply gross enough to deter hungry vertebrates, while free-loading non-spoilers reaped the benefits of residing on the very same piece of fruit without having to contribute to the protective putrefaction. Non-spoilers could devote more time to eating and proliferation, and would soon outnumber the spoilers.

The new model, while still assuming that churning out spoilage chemicals carries a cost, exists in a different hypothetical ecosystem. Here some fruiting plants are sufficiently spread out so that an individual fruit can (at least initially) be colonized by only spoilers or only non-spoilers. On such sparsely growing fruits, spoilers finally have an advantage; the peach they landed on will soon be decked out in malodorous goo, and any foraging fauna will likely pass it over in favor of a tastier one settled by non-spoilers. So on densely growing fruit, non-spoilers are still likely to prosper, but on plants whose fruit is more spread out, spoilers could have the upper hand.

Of course, the new model doesn’t absolutely prove Janzen’s hypothesis, but it does show that it is at least mathematically possible. Since their model requires that microbial populations vary from one fruit to the next, observational studies would need to confirm whether this is actually the case in out in the world.

There are additional intricacies that neither model had the opportunity to explore. Even Janzen didn’t claim that microbial food spoilage exists exclusively to make large mammals miserable. Microbes don’t just compete against vertebrates for resources, they also compete against each other. Antibiotics produced by one species of bacteria in order to kill off competing bacteria is a famous example of such microbe v. microbe chemical warfare. Spoilage chemicals may turn out to be another case of this. Or they could just be byproducts of microbial dining (liquefying a fruit’s flesh can make it easier to ingest), or all the above. 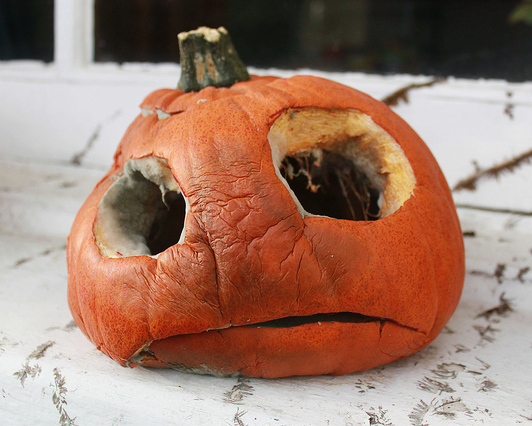 And of course plants themselves aren’t entirely passive in the battle for their precious fruit. They’re better off being visited by organisms that will disperse their seeds rather than just gnawing on their skins, and can produce chemicals of their own to help attain those ends. (Not the case with meat, which by that stage in the animal’s career has no evolutionary advantage to gain being devoured by bear, bird, or bacteria.) In the interest of simplicity, the model didn’t focus on the role of plants. But it’s worth remembering that ecosystems are complex webs in which incredibly diverse organisms compete and collaborate with each other to maximize their own survival. So diverse, in fact, that some of our potential competition is too small to be seen without a microscope.