Are you dieting? Dieters are more likely to take the word “salad” to mean, well, salad, while non-dieters look past the language to what’s on the plate.

Is a salad still a salad by any other name … like, say, “pasta”? Depends – are you dieting? Dieters may be more likely to take the word “salad” to mean, well, salad, while non-dieters look past the language to what’s on the plate. This according to researchers from the University of South Carolina and Loyola University, whose work was published online on April 11, 2011 in the Journal of Consumer Research. 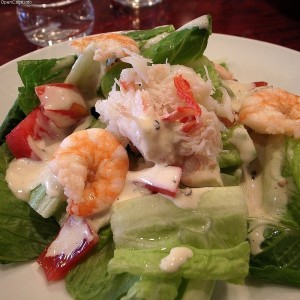 Is it a salad … or shrimp with some lettuce? Photo via Creative Commons.

According to the authors, led by Caglar Irmak of South Carolina, language that implies “this food is healthy to eat” tends to draw in dieters more stealthily than it does non-dieters. Terms like “salad,” “fruit,” “smoothie,” or “veggie” on a menu are eyeball magnets for dieters seeking choices that fit their diet plans. Words like “pasta,” “candy,” “milkshake,” and “chips,” on the other hand … not so attractive to the dieter.

Non-dieters, though, couldn’t care less. It may say “salad” on the menu, but if it features a plate of romaine heaped with pasta, meats, and cheeses, non-dieters are less likely to consider the offering a “healthy” salad sort of meal.

Irmak and co-authors Beth Vallen and Stefanie Rosen Robinson figured this out simply by asking dieters and non-dieters. In four studies, they identified foods using either healthy-sounding words like “salad” or words that might seem less healthy, like “pasta.” (I must be a non-dieter, because my first question would be, “Is the pasta whole wheat?”)

At any rate, non-dieters tended to rate identical foods as healthy if the healthy term was applied. If researchers presented the food with the unhealthy word attached, dieters recoiled in horror (or just rated it as “unhealthy”), while non-dieters weren’t fooled.

Which are you, a dieter or a non-dieter? Give yourself a little test: Which is healthier, a fruit chew or a candy chew? In one of the studies, even though the chews were exactly the same, the use of the word “fruit” led dieters to identify them as the healthier choice.

The paper authors offer a real-life example of how menu items might deceive the term-seeking dieter. Romano’s Macaroni Grill once offered a Grilled Chicken Florentine Salad in its menu’s salad section. The researchers say that the dish may as well have been listed as a pasta because it contains orzo, grilled chicken, fresh spinach, diced tomatoes, and capers. Fooled by the word “salad” and the spinach and tomatoes, a dieter might think the item was a good caloric deal. But what a dieter was really getting was a heap of calories and fat: 900 calories, 60 grams of fat.

Living in the land of taco salads, I learned a long time ago to zoom in past the menu name and look at what will really arrive at the table. Sour cream, guacamole, taco meat, cheese, and a sprinkling of lettuce in a fried tortilla shell? You may say salad, but I’m calling that a couple of deconstructed tacos with the works.

Next time you’re out to dine and you’re dieting, you may want to heed what Caglar Irmak and colleagues have uncovered: that what’s in a name, even if it’s salad, is not quite as important to your diet and health as what’s actually on the plate.

Do your dietary supplements give you the illusion of health invulnerability?

Slow down there, diet soda study