Two-million-year-old fossils uncovered in South Africa possibly reveal the earliest known link to modern humans, according to a series of five reports published September 2011 in the journal Science. The fossilized bones show features of both modern humans and of non-human apes, according to the researchers. They say a new species called Australopithecus sediba has been discovered, a mix between humans and non-human apes. At 1.97 million years old, A. sediba predates the earliest known human ancestor, Homo erectus.

The evidence comes from analysis done on two near-complete and well-preserved skeletons – a juvenile male and an adult female – discovered in 2008 in a cave in Malapa, South Africa. EarthSky spoke with paleoanthropologist, cranio-dental specialist, and report co-author Darryl de Ruiter of Texas A&M University. He said:

Cranium of the juvenile skeleton of Australopithecus sediba. Image Credit: Brett Eloff/Lee Berger and U. of the Witwatersrand

Dr. de Ruiter cautions against referring to these findings as a “missing link” between humans and non-human apes, preferring the term “transitional”‘ or “intermediary form,” so as not to suggest a chain of inferior to superior biology.

Pelvis of Australopithecus sediba. Image Credit: Brett Eloff/Lee Berger and U. of the Witwatersrand

Classifying the new species as australopithecine was “confusing” to the researchers involved, said de Ruiter, because of the mixed features resembling both the more ape-like australopithecines and early humans. Ultimately the evidence leaned towards australopithecines, he added. Smaller in bulk and brain yet bipedal with similar dentition to early humans, A. sediba isn’t as evolved as the genus Homo.

What that broadly means is that it has a body plan more similar to australopithecenes than to humans, and it presumably made its living more similar to australopithecines than to humans. In the feet, the pelvis, the hands, the arms, everything we look at, this is an animal that had a strong capacity to climb around in trees, presumably for feeding, maybe even for sleeping. Yet, on top of this, it also was a biped. It was clearly walking bipedally. And it has, again, these characteristics that foreshadow what we see in later specimens in Homo. So again, this transitional nature, the skull itself, the face, they do look quite primitive. They do look australopithecine-like, yet there are characteristics of things like the projecting nose, the projecting brow ridge – the shape of the cranium itself, although small, is quite boxy-shaped, like a human skull. So we see transitional status in these fossils. 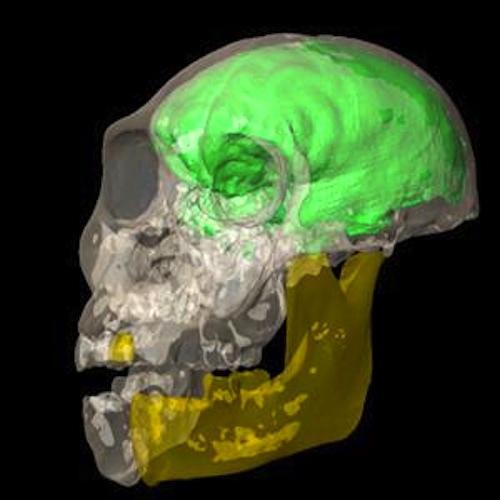 The brain of A. sediba was about the size of a grapefruit, according to this virtual endocast generated using medical imaging based on CT scans. Image Credit: Brett Eloff/Lee Berger and U. of the Witwatersrand

We use a number of different techniques to analyze these fossils, everything from visual inspection to simple linear measurements, to three-dimensional scanning. The skull itself was taken to France and scanned at the European Synchrotron Radiation Facility to give us extraordinary high resolution three-dimensional imagery of these things. We subject them to a variety of statistical tests. We compare them to virtually every other fossil we can get our hands on in Africa.

And on top of this, we have to do some very precise dating of the material itself. One of our papers provides a date for the fossils of 1.977 million +- 1,500 years. That doesn’t seem all that impressive, but that is one of the most precise chronological dates that’s ever been developed for a fossil hominid. We bracketed it down to a 3,000 year timespan, which is remarkable at the two-million-year scale that it’s aged to.

So, a variety of different techniques, performed in a number of different labs in the U.S., in France, in Australia, in South Africa, in Germany, all over the globe. It’s a truly international effort to bring together a wide variety of scientific techniques. 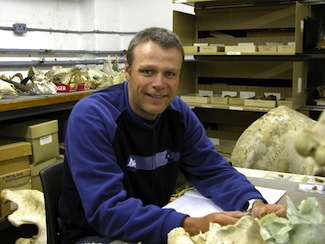 Paleoanthropologist Darryl de Ruiter of Texas A&M University, a co-author of reports on new species A. sediba. Image Credit: Brett Eloff/Lee Berger and U. of the Witwatersrand

As remarkable as these two skeletons are, we have not yet begun to excavate the site. So far, all that we have done is remove blocks that were blasted by limestone miners in about the 1920s, when they were building a road to get past this cave. They used the breccia that they blasted out of the cave to form this road. So we’re actually going through that, picking up all the rock, all the breccia, and recovering all of the hominid fossils that are in there. And that’s still under way. And at the same time, while we’re still getting those fossils out, we’re building a semi-permanent infrastructure to facilitate excavation. That’s because we eventually want to start digging to find more of these remarkable things. And as we go through the cave itself, through the rock that’s still in the cave walls and in the cave sediment, we recognized at least four other individuals. So on top of the juvenile male, and the adult female that we report upon in these series of papers, there are other young individuals and other adult individuals that we can see in the rock wall that we now need to start preparing out. So the next phase of research is to completely extract the skeletons that we’ve discussed so far, and then to start moving in and getting the rest of these fossils and individuals.

Bottom Line: A new species of primate has been announced that is possibly the oldest human ancestor ever found, based on two fossil skeletons discovered in 2008 and analysis announced in September 2011. The new species, called Australopithecus sediba, shares features with both humans and non-human apes.

Ancient humans likely mixed it up