Europeans are so fashion forward. While people in the U.S. are still bickering over soft drink sizes and calorie labeling for Big Macs, the European Union is already tackling a chemical many of us have never heard of: acrylamide. The probable human carcinogen wasn’t discovered in food until 2002. I don’t even know if I’m pronouncing it correctly as I’ve only ever seen it in print. (uh-krill-uh-mide? That seems about right.) Relative obscurity notwithstanding, the EU has spent the last decade working to reduce acrylamide levels in food and collecting annual data on member states’ acrylamide vulnerable edibles. Such trailblazing innovation! 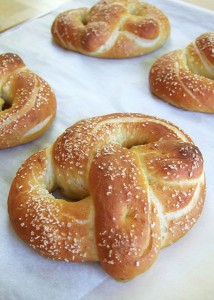 The only glitch is that things aren’t going so well. According to the journal Nature the latest European Food Safety Authority (EFSA) report shows that 6-17% of foods still tested at uncomfortably high levels of the controversial chemical, and not all member states have been equally compliant (out of 25 countries, only 16 managed to hand over data yearly).

In case you’re one of the many acrylamide-ignorant Americans, let me fill you in on the chemical behind all this Euro-worrying. Acrylamide isn’t specific to one continent, or to foodstuffs, for that matter. It’s also an industrial chemical (EPA regulates its levels in drinking water) and a component of cigarette smoke. Acrylamide’s tendency to cause tumors in lab rats earned it the label of “probable carcinogen”* in 1994. Then in the early 2000’s scientists discovered it in certain foods and quickly traced the source of the problem to the celebrated Maillard reaction – the chemical interplay between sugars and amino acids, when heated, that causes food to brown and generally become delicious. High heat cooking (e.g., frying, roasting, baking) of foods containing ample sugars and amino acids such as asparagine (yes, it’s named after asparagus) churns out acrylamide as a by-product of the Maillard reaction. Susceptible foods include potatoes, grains, and <chokes back tears> coffee beans. More browning = more acrylamide. So one obvious way to reduce levels is simply to fry your fries and toast your toast to a lighter shade. 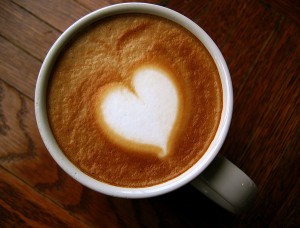 But before you chuck your Panini-press, we should perhaps consider just how carcinogenic acrylamide is. Unfortunately, it’s not an easy matter to settle. Sure, it causes “cancerous changes” in lab animals, but at levels higher than what a person is estimated to encounter in diet alone. Human studies looking for increased cancer risk associated with higher acrylamide consumption have turned up more misses than hits. And since acrylamide production tends to be highest in foods that are unhealthy for other reasons – high fat, low fiber favorites like potato chips – it can be difficult to separate the variables. Outside of the cancer realm, however, a recent study reported that pregnant women who consumed foods high in acrylamide delivered babies with lower birth weights, not exactly the expected result of scarfing down French fries for close to a year. 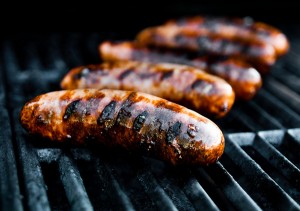 Maybe you can just eat around the burnt parts? Image: Christopher Craig.

Additionally, there are other chemicals produced by cooking that have been associated with causing cancer in lab animals. If you’re on some sort of low-carb diet, you probably won’t run into much acrylamide in your meals, but you should be aware of heterocyclic amines (HCAs) and polycyclic aromatic hydrocarbons (PAHs) – chemicals formed when high heat cooking techniques are applied to meat. As with acrylamide, the relationship between grilled/fried/roasted meats and cancer in humans is less than crystal clear. (And again, good luck separating the effects of the heat-spawned chemicals from those of the saturated fat in the meat itself.) Still, there may be something to this high heat cooking and cancer connection. If only there were a slower, gentler, less potentially carcinogenic way to cook food. Well, there is. Say hello to my little friend… 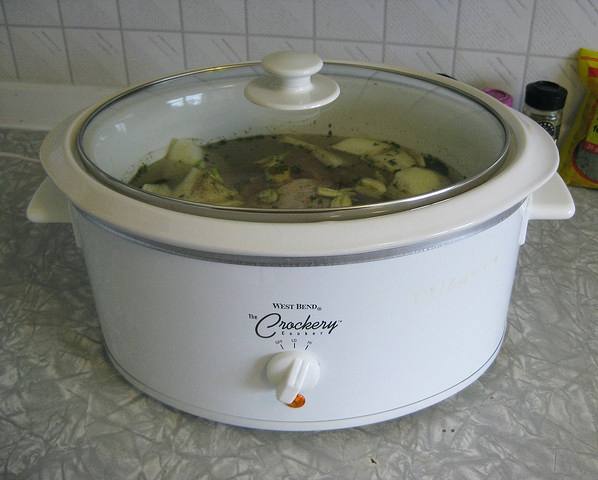 Okay, I’ve never actually owed or operated a crockpot, but one time my next-door neighbor phoned me because she’d decided to stay overnight at her boyfriend’s place while a crockpot in her own apartment slowly produced some sort of stew. It was just an FYI call, so I’d be aware of the situation in case anything went awry. I don’t know how the stew fared after 12 hours of cooking, but I didn’t hear a peep out of the crockpot all night. You certainly couldn’t try the same thing with a pan full of home fries.

Crockpots – aka slow-cookers – operate at low temperatures and thus take freaking forever to get anything done (yes, I’m an impatient cook, what of it?). They’re sort of a grown up version of an Easy-Bake Oven in that they cook food (eventually) while minimizing the risk of third degree burns. They’re also unlikely to produce acrylamide or PAHs and the like. What could possibly go wrong?

Alas even with something as seemingly innocuous as a crockpot there are issues, they’re just located on the opposite end of the hazard spectrum. Basically, slow-cookers, with their often sub-boiling-point temperatures, may not generate enough heat to kill some of the nasty stuff lurking in your food. For instance, the USDA recommends against cooking frozen meat or poultry in a crockpot, as this won’t allow enough actual cooking time to destroy pathogenic bacteria. Reheating meals in the crockpot is also a not a good idea (again due to bacteria, though you could also die of starvation waiting for your food to be ready). 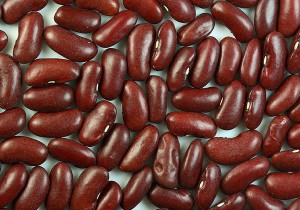 Not edible in their raw form. Image: Sanjay Acharya.

But the most dangerous thing to load into your crockpot isn’t improperly thawed chicken. It’s red kidney beans. These beans contain high concentrations** of a naturally occurring but toxic protein called phytohaemagglutinin, or PHA (not to be confused with PAHs, though the confusion seems pretty inevitable). Boiling destroys the toxin, but outbreaks of food poisoning (severe gastrointestinal symptoms, including plenty of vomiting) have been linked to raw and undercooked kidney beans. Crockpots on their low settings may hover at only around 75C (well below the boiling point of water – 100C). Several shady corners of the internet assert that kidney beans cooked at below boiling temperatures are actually more toxic than raw ones. However, these all reference the same source – an earlier edition of the FDA’s “Bad Bug Book”, which offers neither a possible mechanism for the surprising claim nor any research to support it (nice science, FDA). The updated edition omits the would-be factoid, and I can’t think of any explanation beyond “cooking at low temperatures just makes the toxin angry”, so let’s just say that raw and undercooked kidney beans are similarly hazardous. In any event, if you’re going to make chili in a crockpot, boil the beans on the stove first. Or just use the canned ones.

So frying is too hot, and slow-cooking is too cold. Is anything just right? Well, boiling and steaming don’t seem to produce much acrylamide, and boiling will certainly destroy your bean toxins if you give it enough time (at least 30 minutes of boiling, preceded by 5 hours of soaking, according to the FDA). Oh, and there’s always the microwave. And isn’t a low-acrylamide “microwave-baked” potato just as tasty as one baked in a real oven? Why, you can even make bread in a microwave! Yay? Oh, forget it. Despite what cookbooks from the 1980’s claim, nothing good ever comes out of a microwave. Besides, there could be countless other harmful chemicals hiding in our food that science has yet to uncover. As I’ve been saying for years – ingesting anything is inherently dangerous, and we should all stop eating and drinking immediately. Just to be on the safe side.

** Other beans of the species Phaseolus vulgaris – such as white beans – also contain PHA, but in less overwhelming doses.