“A squeal of distress will go flying across America … It’s all those clocks, being twisted an hour forward, away from the natural time they were born to show.” Insights on time from astronomer Guy Ottewell, here. 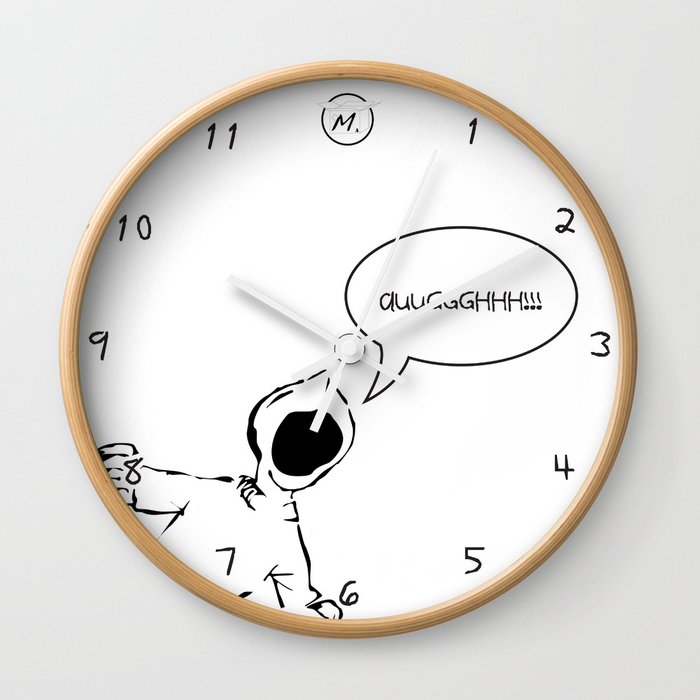 Ya know? This clock is for sale, btw, from Society6.com.

This article was published originally at Guy Ottewell’s blog. Reprinted here with permission.

A squeal of distress will go flying across America in the night between Saturday and Sunday, March 9 and 10, 2019. It’s all those clocks, being twisted an hour forward, away from the natural time they were born to show.

The annual ordeal will be inflicted on the clocks of Europe three weeks later.

People seem to find it hard to keep the issue clear. The calendar-like graph below should help. It’s a part of my diagram of the rising and setting times of planets for the year, with the planets removed.

It could be drawn with midday down the middle, but instead, because the displaced time especially complicates astronomy, it’s centered on midnight, thus showing the span of night (for latitude 40° north).

The gray vertical lines show what our clocks are told to do. In January and February, and again in November and December, they are allowed to keep to the natural time (or approximately so, if we ignore the minutes of difference made by the slight irregularity of Earth’s orbit, and by how far east or west you are within your time zone).

But from March 10 to November 3 (and, slightly less crazily, March 31 to October 27 in Europe) we have to wrench our clocks forward an hour from natural time. When the clock says 5 p.m., the time is really 4; when it says 8 a.m., it’s really 7. We pretend that 4 is 5 and 7 is 8. “Midnight” is no longer midnight, and at “midday” the sun has not reached the middle of the sky.

An otherwise intelligent columnist in the Guardian (John Crace) said on March 2: “Not for the first time I wondered why the clocks couldn’t go forward now, rather than in four weeks time. It’s now light well before 7 a.m. … ” Start getting up earlier, John.