Clearing your skin and killing germs with viruses

Strange as it sounds, some viruses are good for you.

It may be hard to imagine given my current level (irony alert) of sophistication and poise, but I was once an awkward teenager with bad skin. Not so terrible as to leave acne scars, but unsightly enough that my mother enlisted a dermatologist to eradicate the zits she feared would further damage my already shaky self-esteem. Along with topical creams and a fancy lamp, the doctor had in his arsenal a prescription pad, onto which he scribbled an order for antibiotics.

Acne is believed to be caused, at least in part, by the bacterium Propionibacterium acnes. The bacteria are normal residents on our skin and usually mind their own business, but, on some unlucky faces, adolescence comes with an increase in the bacterial population (teens with acne carry 100 times the amount of P. acnes found on healthy skin) and a losing battle with blemishes. A medication that kills bacteria (i.e., antibiotics) can ease this microbial overcrowding and its accompanying skin inflammation (i.e., zits). As an uninformed 15 year old, I took the pills without a second thought. But as an adult who has read countless articles on antibiotic resistance, I’m a little horrified at the idea of using these crucial and rapidly dwindling resources to treat moderate acne. I’m not alone in this concern. With up to 60% of strains of P. acnes now sporting antibiotic resistance (along with many more dangerous species of bacteria), and a dearth of novel antibiotics in the works, scientists are looking for new ways to do away with pathogenic bacteria. And one of those solutions may be viruses.

I know what you’re thinking. Viruses are destructive little jerks bent on giving us swine flu, and chicken pox, and venereal warts. Why would we want to put them on a cotton ball and rub them on our face? But viruses are more than just human pathogens. They’re incredibly diverse microbes that have evolved to infect every kind of cell out there. Not just our human cells, but also plant cells, archaeal cells (for those who know what those are), and, yes, even bacterial cells. Viruses that infect bacteria are called bacteriophages, or just phages (the word comes from the Greek “eat”), and they are the hopefuls for future zit creams. 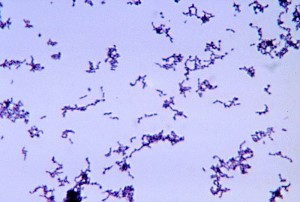 After sequencing the genomes of 11 phages that infect P. acnes bacteria (the viruses coexist with bacteria on both healthy and pimple-plagued skin), a group of scientists believe these viruses are well suited for tackling human acne. The 11 P. acnes phages studied were highly similar genetically, which is unusual for phages, and yet were able to infect a wide range of P. acnes strains. So one type of phage could potentially be effective in destroying acne bacteria on a variety of skin types. And since it’s a P. acnes phage, it would kill only P. acnes bacteria. It couldn’t go after our own eukaryotic cells, nor could it infect other species of bacteria sharing space on or in our bodies. Antibiotics, on the other hand, target not a particular bacterium, but general aspects of bacterial structure and/or replication. As a result, they have a tendency to kill the good microbes along with the bad. P. acnes phages are picky eaters, as are most phages, and will ignore everything other than their host bacteria.

Still not loving the idea of viruses living on your face? Then you’re going to even less thrilled about them shacking up in your food. As with P. acnes phages, this happens in part due to natural symbiosis, but also by design. In 2006, the FDA approved a spray-on medley of six listeria-loving phages to be applied to packaged cold cuts (Listeria monocytogenes is an unusual food contaminant in that, unlike most pathogenic bacteria, it can still multiply in the chilly environment of your fridge). Yes, as strange as it sounds, there may be live virus on your pastrami sandwich, which someone put there deliberately to protect you from a deadly disease. And there may be more such products coming our way. 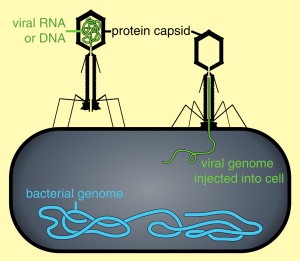 But let me stress the huge dissimilarity between bacteriophages and viruses that infect animal cells. It’s hard enough for phages to infect bacteria outside their narrow host range. It would take a mountain of mutations for them to have any chance at entering our eukaryotic cells. They just don’t have the right tools. It’s like trying to pick a lock with a piece of cooked spaghetti.

So great. The pathogen of my pathogen is my friend. Viva la phages, yes? Sadly it’s never that simple. While some phages kill off bacteria that could harm humans, others might actually, oh dear, make bacteria more pathogenic. Case in point, the European E. coli outbreak in summer of 2011. You may recall reading that these bacteria were especially dangerous because they produced something called “Shiga toxin” which accounts for the nastier symptoms in this variety of food poisoning. But pumping out Shiga toxin isn’t something E. coli do normally (many strains of the bacteria are quite harmless). The genes for making the toxin come from a phage that infects E. coli. This happens because phages vary in how they infect a host cell. Some just go the simple route – entering the host, replicating (rudely appropriating the host’s cellular machinery to do so) and then bursting their way out of the cell. But others are also able to fuse their genome with that of the host bacterium and lay low for a while as the host divides (replicating viral genes along with its own in each division). So it’s wise to test this stuff in the lab first before you try mixing just any old phage into your morning coffee. 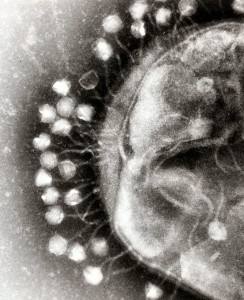 Glitches like Shiga toxin notwithstanding (it’s really not the norm), the idea of phage therapy – fighting bacteria with viruses – has been kicking around for almost a hundred years, and Western medical research was making some headway (albiet slow and fickle) with phages before they took a back seat to antibiotics. But now, with the distressing rise of multidrug-resistant bacteria, phages are starting to look pretty attractive again. Some of the pros and cons of phage therapy are one in the same. For instance…

Pro: Host specificity. Phages, unlike antibiotics will only attack one species (or a few species) of bacteria. So they won’t decimate your beneficial gut flora when all you’re trying to do is get rid of a sore throat.

Con: Host specificity. Species of bacteria come in many strains, and some phages are so particular that they can only kill a fraction of these strains. This is the reason why that listeria-fighting food spray uses a mixture of phages rather than just one type.

As for the zit zapping phage, researchers were encouraged to learn that, despite the phages themselves having very similar genes, all were good at killing most strains of P. acnes encountered. They did observe, however, two bacterial strains resistant to much of the phage brigade. And more could certainly arise. Bacterial resistance is something of an inevitability (bacteria have been adapting to our medications for as long as we’ve been making them). But the potential for antibiotics to produce resistant strains seems broader. If you apply doses of P. acnes phage to your face regularly, you risk producing phage-resistant P. acnes bacteria. But if you take a pill designed to destroy gram-positive bacteria in general, additional species getting caught in the crossfire can also become resistant. And, unlike antibiotics, phages can evolve, which may give them a shot a keeping up with ever-adapting bacteria.

The good news is that pimples don’t last forever. Eventually troubled adolescent skin calms down and clears up. And then you can start getting wrinkles, which no virus known to man can fix.