Christopher Small on the pattern of cities on Earth’s surface

“Networks of cities connected by rural areas form a pattern that we see all over the world,” said Small. “It’s a spatial pattern, but it’s not a simple geometric pattern.”

Christopher Small, of the Lamont-Doherty Earth Observatory at Columbia University in New York, is trying to understand how cities grow and connect, physically, with each other. To do this, he analyzes census and night-light data – night-light as seen from space by orbiting satellites. He told EarthSky:

Networks of cities connected by rural areas form this pattern that we see all over the world. It’s a spatial pattern, but it’s not a simple geometric pattern.

Instead, he said, the pattern of cities on Earth’s surface looks more like a root system. Dr. Small added that once scientists understand these patterns of human development better, the patterns might provide insights that will help scientists forecast and guide the growth of cities. One goal could be to keep surrounding natural areas – and the animals they house – are minimally disturbed. Dr. Small said:

In some countries in the tropics, conservationists look at natural habitats of animals that need to migrate through forests. So if you break a big piece of forests into a number smaller pieces, some animals can’t survive in these smaller pieces, because they need to move around.

One thing they try to do in cases like this is keep these patches connected. Then the animals that need to move from one to another are still able to do it without having to move through human dominated areas.

Dr. Small explained that what he’s looking for, in census and night-light data, is what he called an “emergent” spatial pattern of human development. He explained:

This pattern is sometimes referred to as an emergent pattern meaning that there’s an order that wasn’t imposed by anybody, but just emerged from the collective actions of everyone. An analogy is, when you look at a colony of ants, when you look at it from a distance, they’re clearly emerged in cooperating but there is no leader, and there’s a collective pattern that emerges from that.

He said the emergent pattern of human settlements is poorly understood, but one thing his team has learned is that city sizes tend to have a predictable relationship. Dr. Small elaborated: 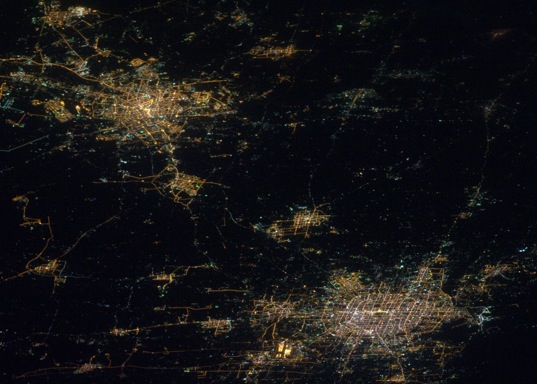 Even though people in cities may make demands on natural resources in outlying areas (and even places far away, if, say, they’re seeking tropical fruit or lumber), it’s still good news for Earth that humans are clustering in cities, according to Dr. Small:

Dr. Small said his research has also confirmed some very basic information about where, on Earth, we humans live. He said:

Humans occupy every type of environment on Earth, every climactic zone. But at global scales, we’re very densely clustered with most people living on just a few types of landscape. Basically, coastlines, delta and valleys.

He added that he made another definitive finding:

There’s a perception among many people that the world is overpopulated, and that we’re running out of space. One thing we’ve been able to quantify is that we are most definitely not running out of space. Most people in the world live less on less than three percent of Earth’s habitable land area – that’s excluding Greenland, the ice sheets. So there’s a lot of land left.

Small talks more about this work in a book – published by a team of scientists in early 2011 – called Human Population: Its Influences on Biological Diversity. Listen to the 90 second EarthSky interview with Christopher Small on how cities grow and connect (at top of page.)