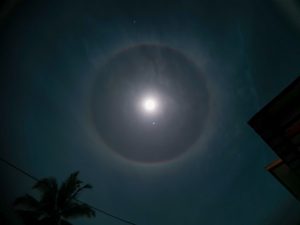 Shazri Saudi in Lawas, Sarawak, Malaysia, captured this photo of a 22-degree lunar halo on December 26, 2020. He wrote that Mars can be seen outside of the halo.

Thank you! Your submission has been received!
Oops! Something went wrong while submitting the form.
END_OF_DOCUMENT_TOKEN_TO_BE_REPLACED