Researchers at CERN report first measurement of antihydrogen spectrum. We are one step closer to understanding why our universe of matter exists at all.

Researchers at CERN announced today (March 7, 2012) that they have taken a key step in being able to probe the structure of the antimatter counterpart of simplest atom, hydrogen. They report the first measurement of the antihydrogen spectrum, calling it a “modest” measurement. This new work should take us a step closer to probing the fundamental mystery of why our universe of matter exists at all.

This news comes from CERN’s Alpha Group, which reported in June 2011 they had routinely trapped antihydrogen atoms for long periods of time. In a press release sent by the group to EarthSky this morning, the team said:

ALPHA’s latest advance is the next important milestone on the way to being able to make precision comparisons between atoms of ordinary matter and atoms of antimatter, thereby helping to unravel one of the deepest mysteries in particle physics and perhaps understanding why a universe of matter exists at all. 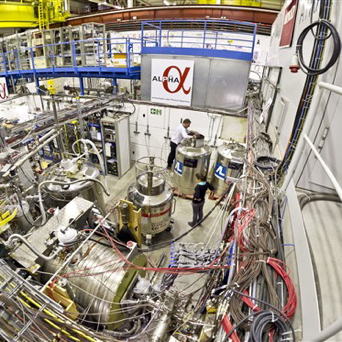 The ALPHA experiment at CERN, where researchers have measured a spectrum of an antihydrogen atom. Image Credit: Maximilien Brice/CERN via Scientific American.

The CERN Alpha Group released its results in a paper published online today by the journal Nature. CERN – whose most famous piece of equipment is the Large Hadron Collider (LHC), a huge particle accelerator spanning the border between Switzerland and France about 100 meters (300 feet) underground – calls this result an “important milestone.” The group said in its press release:

Today, we live in a universe that appears to be made entirely of matter, yet at the Big Bang, matter and antimatter would have existed in equal amounts. The mystery is that all the antimatter seams to have gone, leading to the conclusion that nature must have a slight preference for matter over antimatter. If antihydrogen atoms can be studied in detail, as ALPHA’s latest result suggests, they may provide a powerful tool for investigating this preference.

Hydrogen atoms are the simplest atoms in the universe, thought to have formed in the Big Bang in which the universe began. A hydrogen atom consist of a single electron orbiting a central nucleus.

The CERN researchers utilized the fact that firing light at atoms causes them to become “excited,” so that the atoms’ electrons jump to higher orbits. The electrons later relax back to a ground state by emitting light. The light emitted by electrons in a hydrogen atom has a frequency distribution – or spectrum – that unique to hydrogen. According to what physicists understand about nature, antihydrogen should have a spectrum identical to ordinary matter hydrogen. Measuring this spectrum has been a goal of the ALPHA collaboration. The group’s spokesman, Jeffrey Hangst, said:

Hydrogen is the most abundant element in the universe and we understand its structure extremely well. Now we can finally begin to coax the truth out of antihydrogen. Are [antimatter hydrogen atoms] different? We can confidently say that time will tell.

You can get more details about the Alpha apparatus and its work via the video below:

Bottom line: Researchers at CERN announced on March 7, 2012 that they have measured a spectrum of antihydrogen.