Like flocks of birds, cells coordinate their motions as they race to cover and ultimately heal wounds to the skin, according to new research.

Scientists at Rice University say that skin cells coordinate their motions as they race to cover and ultimately heal wounds. They say this motion can be compared to the way birds swoop and flock in unison.

Previously, it was thought that only the cells at the edge of a growing patch of wounded skin were actively moving. Dividing cells were thought to passively fill in the middle of a wound. But the team of researchers – led by physicist Herbert Levine – say they’ve learned that the process of healing skin works more efficiently if highly activated cells in every part of a wound exert force as they pull neighboring cells along.

Levine has introduced what he says is “the first iteration of a computer model to analyze the two-dimensional physics of epithelial sheets,” that is sheets of skin cells. The paper on this research, produced by Levine and colleagues at the University of California at San Diego and in Germany and France appeared January 25, 2013 in the Proceedings of the National Academy of Sciences. 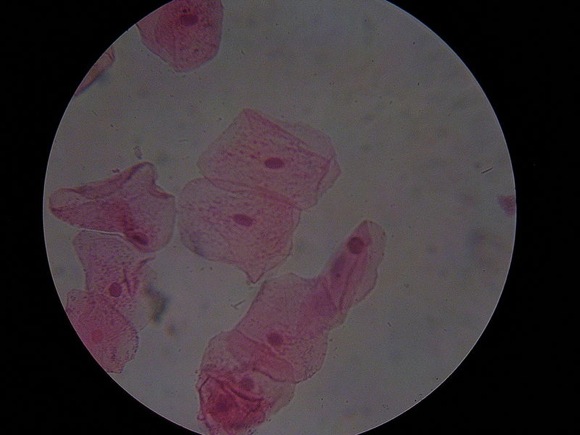 Levine and his colleagues create computer models of processes seen by experimentalists to flesh out the rules that govern biological systems. In a press release from Rice, Levine said:

Here, we’re combining experimental observations from single cells with general notions from the physics literature to create an integrated way of thinking about this multicellular system.

In other words, they’re trying to create an integrated way of thinking about what your skin does when it’s trying to heal itself. They said your body marshals a huge array of forces to heal wounds. Many have to do with cell biology – in other words, the internal and external signals that tell a cell when to move, when to stop, when to split and when to die.

Their approach was to focus on the cell’s physical interactions with its neighbors. In the process, these researchers looked to the skies for inspiration and to the way some species of birds flock and move in unison. Like flocks of birds, they said, cells coordinate their motions in order to heal a wound. They said your skin cells “see” their neighbors, which they described as “sticky.” And they said each cell pulls and tugs its neighbors in the process of healing skin.

Birds look around and decide which way all their neighbors are flying. The idea that they would move as independent birds but also coordinate is where the idea of flocking came from. This way of thinking hadn’t been applied to epithelial tissue motility in wound healing. Like flocks of birds, cells coordinate their motions as they race to cover and ultimately heal wounds to the skin. Image via EarthSky Facebook friend Guy Livesay. Thank you Guy! More on how flocking birds move in unison here

What cells “see,” he said, are their “sticky” neighbors, which pull and tug them along. They move on lamellipodia, which are thin sheets that serve as “feet,” he said, acting something like the treads on a tank. The overlapping lamellipodia of adjacent cells influence each other.

The researchers are the first to admit that there’s a lot going on in your skin when a wound is being healed. They said their computer modeling work has “a long way to go.”

[The simulation model] is rough around the edges. Biologists who read this will immediately say, “You’ve left out all sorts of interesting things we know are happening.”

Yes, there will be experiments for which this approach will not be sufficient. It will teach us that in those cases, biology has to exert a more specific role in creating the structures and the motion.

Levine hopes to match the models to current work by experimentalists on motility in cells related to the metastatic spread of breast cancer. He said:

We’re a long way from saying anything about this problem. But that’s my overall agenda — to push my research to where it can make contact with the cancer community.

The video below has more on how your skin heals … tough accent for us Americans, but I learned something, and I hope you do, too.

Bottom line: A Rice University physicist has led a team of researchers in analyzing with a computer how skin cells interact with each other to heal a wound. The team believes the cells coordinate their motions, much as birds do when they swoop and dive as a flock.

Read more about this research from Rice University

Read more about how flocking birds move in unison