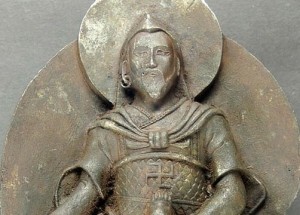 Iron Man, a Buddhist statue stolen from Tibet by the Nazis in 1938. It is thought to be 1,000 years old. Chemical analysis by German scientists now have revealed that the statue was carved from a meteorite.

Thank you! Your submission has been received!
Oops! Something went wrong while submitting the form.
END_OF_DOCUMENT_TOKEN_TO_BE_REPLACED