Scientists at University of Stuttgart found that a Buddhist statue known as Iron Man has geochemistry matching the 15,000-year-old Chinga meteorite.

This story made the rounds in late September 2012, but I didn’t want you to miss it. It’s a 1,000-year-old Buddhist statue – returned to Germany shortly before World War II by a Nazi-backed expedition to Tibet – that’s now believed to have been carved from a meteorite. The statue is known as Iron Man. It bears a swastika on its chest, a symbol that dates back to ancient India as well as classical antiquity. Scientists from Germany and Austria determined the meteoritic origin of the statue through chemical analysis. The statue is believed to be carved from a piece of the Chinga iron meteorite that fell near the border of Siberia and Mongolia around 15,000 years ago. 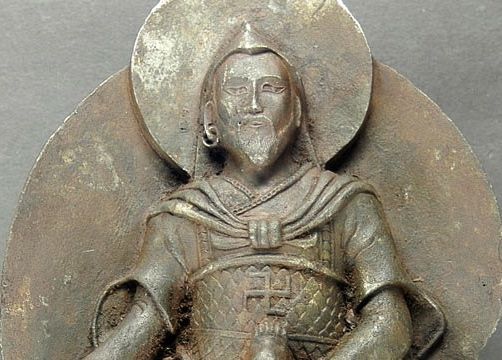 Iron Man, a Buddhist statue stolen from Tibet by the Nazis in 1938. It is thought to be 1,000 years old. Chemical analysis by scientists at Stuttgart University reveals it as a fragment of an iron meteorite. The statue is 24 centimeters – about 9.5 inches – high.

The expedition to Tibet, in 1938, was backed by Heinrich Himmler, a military commander and leading member of the Nazi party. He’s said to have believed that the secret origin of the entire Aryan race could be uncovered in Tibet. It was manned by members of the Schutzstaffel – often abbreviated SS – a paramilitary organization under Adolf Hitler and the Nazi Party

The swastika on the statue’s chest might be the reason expedition members felt justified in grabbing the statue and hauling it back to Germany. The swastika, however, is a much older symbol than the SS members may have known. It’s been used in various ancient civilizations around the world and remains widely used in Hinduism and Buddhism, primarily as a symbol to evoke shakti – the sacred symbol of auspiciousness – said to represent the female principle of divine energy. 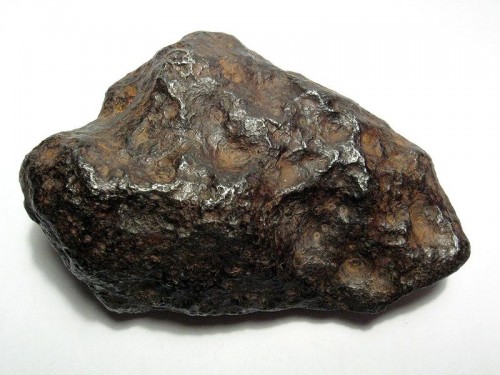 Another fragment of the Chinga meteorite, which crashed along the border of Sibera and Mongolia 15,000 years ago. This fragment is about 9 centimeters – 3.5 inches – wide.

Elmar Buchner of the University of Stuttgart, Germany, told various media last month that the Chinga meteorite – of which the statue is believed to be made – was officially discovered in 1913 by gold prospectors. But the statue is much older, he said, perhaps 1,000 years old. The statue is 24 centimeters – about 9.5 inches – high, and it weighs 10.6 kilograms (23.4-pounds). In other words, it’s heavy, because it’s made of iron.

Buchner and his team conducted an analysis of the iron, nickel, cobalt and trace elements of a sample from the Iron Man statue. They found that its geochemistry matches values known from fragments of the Chinga meteorite. It’s made of ataxite, a rare type of iron meteorite with a high nickel content. If the statue is in fact made from this meteorite, the piece turned into the Iron Man would be the third-largest fragment of the meteorite known. The scientists published their study of the Iron Man statue in September 2012 in the journal Meteoritics and Planetary Science.

Bottom line: Scientists at the University of Stuttgart in Germany conducted a chemical analysis of a Buddhist statue known as the Iron Man and found that its geochemistry matches that of the Chinga meteorite, which fell 15,000 years ago.