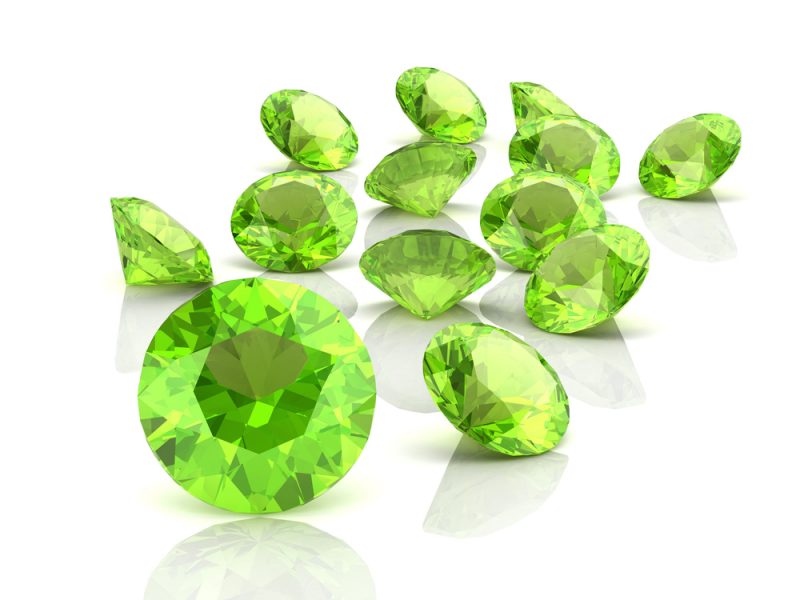 Peridot is a gem-quality transparent variety of olivine, a mineral composed of magnesium-iron silicates. The color of olivine ranges from olive to lime green, sometimes with a brownish tinge. The green color is due to the presence of iron, while the brownish tinge indicates a higher iron content. 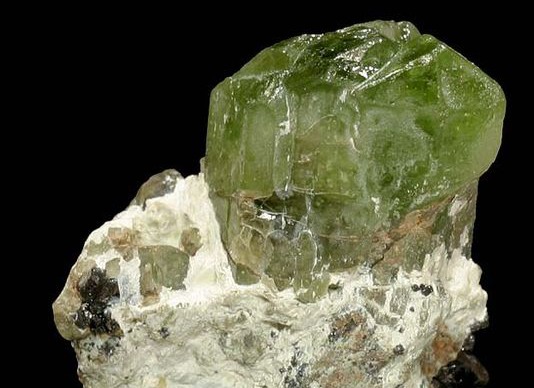 Some of the finest peridot stones are called “evening emeralds” because they appear greener under artificial light.

An island in the Red Sea – named Zabargad, which means olivine in Arabic – has been mined for peridot since ancient times. It is a small, desolate island. Nothing grows, there is no fresh water, and it is scorchingly hot all year round except the middle of winter. In some locations on the island, fissures are lined with gem crystals ranging from millimeters to several centimeters. Beaches near the deposits have a greenish hue due to tiny green peridot crystals.

Peridot crystals are also found in the Mogok district of Burma, Norway, Brazil, China, Kenya, Sri Lanka, Australia, and Mexico. In the United States, small stones can be found in the San Carlos Indian Reservation in Arizona. Peridot has also been found in some meteorites.

Peridot is among the oldest known gemstones. The “topaz” on the breastplate of Aaron, High Priest of the Hebrews in the Hebrew Bible, was believed to actually be peridot. Ancient Egyptians, around 1580 B.C. to 1350 B.C., created beads from peridot. For Greeks and Romans, peridot was in popular use as intaglios, rings, inlays, and pendants.

The peridot was regarded since ancient times as the symbol of the sun. The Greeks believed that it brought royal dignity upon its wearer. During the Middle Ages, peridot was pierced, then strung on the hair of an ass and attached to the left arm to ward off evil spirits. The Crusaders thought that peridots were emeralds, and brought them back to Europe where they were featured as ornaments in churches.

Peridots were a prized gem late in the Ottoman empire (1300-1918). Turkish Sultans collected what is believed to be the world’s largest collection. The gold throne in Istanbul’s Topkapi museum is decorated with 955 peridot cabochons (gems or beads cut in convex form and highly polished) up to 1 inch across, and there are also peridots used as turban ornaments and on jeweled boxes. The largest stone is believed to be a 310-carat gem that belongs to the Smithsonian. A 192-carat stone of fine clear olive-green is part of the Russian crown jewels in the Kremlin.

Sardonyx is a variety of the silica mineral called chalcedony. This sort of mineral contains layers of tiny quartz fibers, which are stacked on top of each other to give a banded appearance. The layers in these stones range from translucent to opaque. The stones vary in color, too. They may be white or gray, ranging to many colorful varieties. 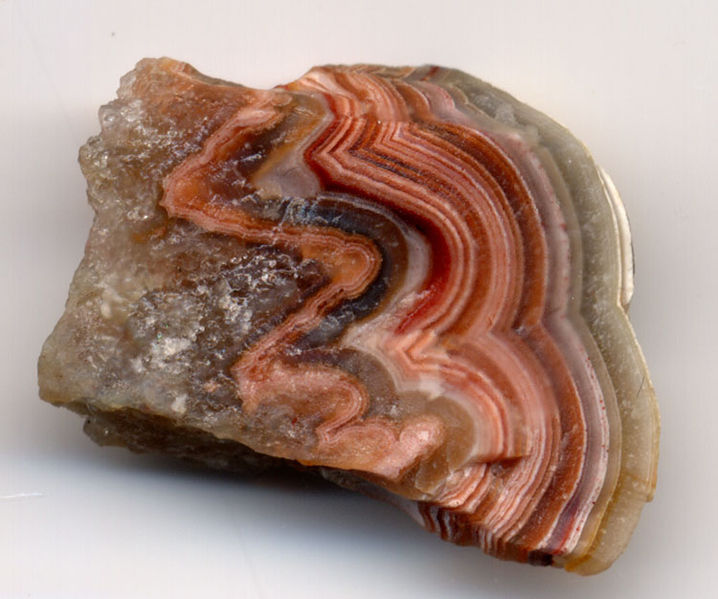 Sardonyx stones usually contain flat-banded, white and brownish-red bands. The word sardonyx is derived from the Greek, sard meaning “reddish brown,” and onyx meaning “veined gem.” The best stones are found in India. They are also found in Germany, Czechoslovakia, Brazil, and Uruguay. In the United States, sardonyx can be found in the Lake Superior region and in Oregon.

Cameos and intaglios are often carved from sardonyx. Cameos are figures carved on a stone, where the white layer appears as relief, and the colored layer is the background. Intaglios are the reverse of cameos. They are incised figures on the stone, where the stone is carved through the dark layer to reveal the light layer.

Sardonyx is a relatively common and inexpensive gemstone. It was a favorite gemstone in ancient times, popular not only because it was attractive, but also because it was widely available. Unlike most rare gemstones that could only be bought with the wealth of royalty and nobility, sardonyx could be obtained by many less-wealthy people.

Roman soldiers wore sardonyx talismans (objects bearing a sign of astrological influence to guard from evil and bring good fortune) engraved with heroes such as Hercules or Mars, god of war. They believed that the stone would make the wearer as brave and daring as the figured carved on it. During the Renaissance, sardonyx was believed to bring eloquence upon the wearer and was regarded with great value by public speakers and orators.

Perhaps the most famous sardonyx stone was set in a gold ring, carved with the portrait of Queen Elizabeth I of England. It was given to the Earl of Essex by the Queen as a token of friendship, and she assured him that she would always come to his aid if he ever requested it. The Earl, imprisoned for treason, was condemned to be beheaded. He tried to send the ring to his Queen but it fell into the hands of Lady Nottingham, whose husband was an enemy of the Earl of Essex. Thinking that the Earl was too proud to ask for her mercy, the Queen allowed his execution. It wasn’t until the deathbed confession of Lady Nottingham that the Queen learned the truth, which left her heart-broken.