Born on this date in 1879, Einstein changed our notions of space, time and matter – launched modern physics – and became a household name. 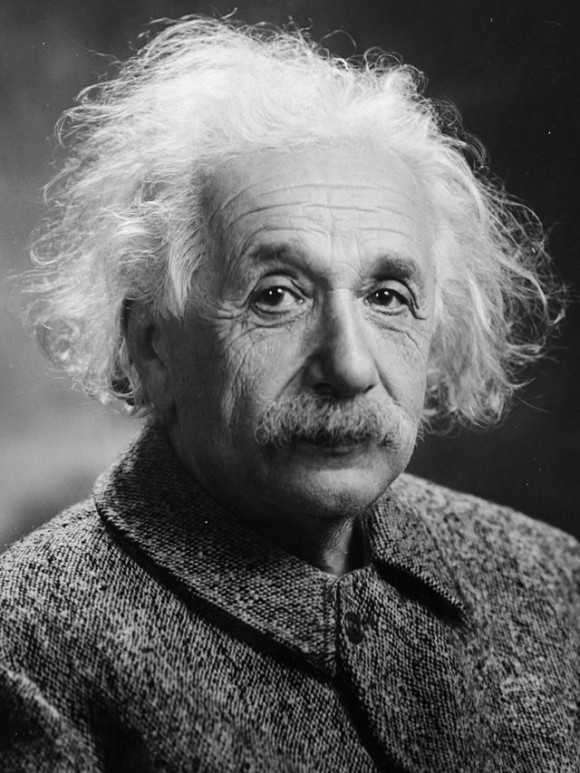 Albert Einstein in 1947, via Wikimedia Commons.

March 14, 1879. This is the anniversary of the birth of Albert Einstein.

Einstein was born in Ulm, Germany, where an uncle – Jakob Einstein, an engineer – introduced him to science and math. At age 17, he enrolled in the Swiss Polytechnic Institute after failing the entrance exam the previous year. He graduated in 1900, and in 1902 he became a junior patent examiner in the Swiss Patent Office in Bern, Switzerland, where he specialized in electrical devices.

The year 1905 came to be known as Einstein’s Miracle Year. He was 26 years old, and in that year he published four papers that reshaped physics. 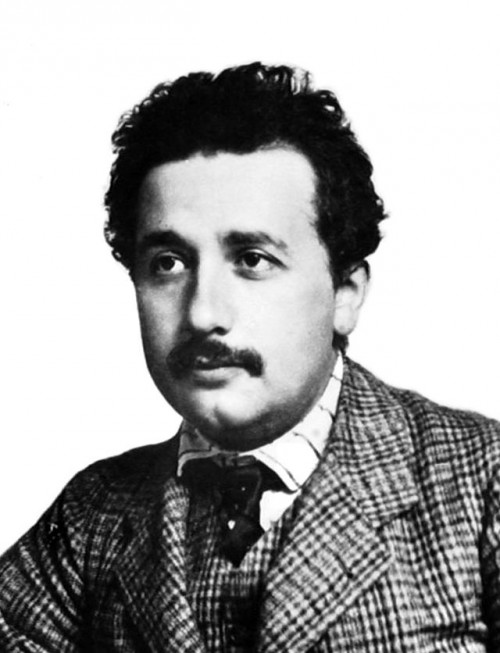 Special relativity. Also in 1905, Einstein published his Special Theory of Relativity. Before it, space, time and mass all seemed to be absolutes – the same for everyone. Einstein showed that different people perceive mass, space and time differently, but that these effects don’t show up until you start moving nearly at the speed of light. Then you find, for example, that time on a swiftly moving spaceship slows down, while the mass of the ship increases. According to Einstein, a spaceship traveling at the speed of light would have infinite mass, and a body of infinite mass also has infinite resistance to motion. And that’s why nothing can accelerate to a speed faster than light speed. Because of Einstein’s special relativity, light is now seen as an absolute in a universe of shifting values for space, time and matter.

Mass-energy equivalence. The fourth 1905 paper stated that mass and energy are equivalent. You perhaps know something of this work in Einstein’s famous equation E=mc2. That equation means that energy (E) is equal to mass (m) multiplied by the speed of light (c) squared. Sound simple? It is, in a way. It means that matter and energy are the same thing. It’s also very profound, in part because the speed of light is a huge number. As shown by the equation, a small amount of mass can be converted into a large amount of energy … as in atomic bombs. It’s this same conversion of mass to energy, by the way, that causes stars to shine. 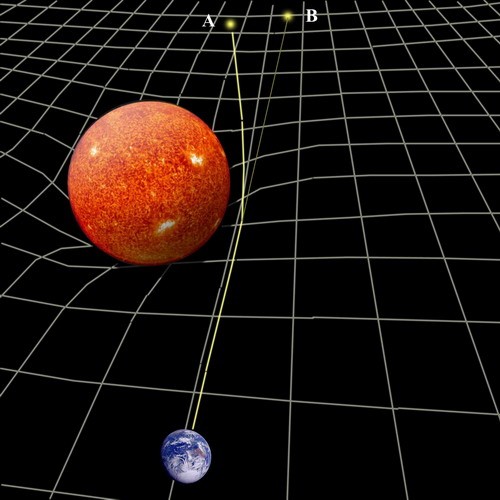 In his General Theory of Relativity, Einstein showed that matter causes space to curve, as in this illustration of starlight being bent by the sun’s gravity.

But Einstein didn’t stop there. As early as 1911, he’d predicted that light passing near a large mass, such as a star, would be bent. That idea led to his General Theory of Relativity in 1916. This paper established the modern theory of gravitation and gave us the notion of curved space. Einstein showed, for example, that small masses such as planets form dimples in space-time that hardly affect the path of starlight. But big masses such as stars produce measurably curved space.

The fact that the curved space around our sun was measurable let other scientists prove Einstein’s theory. In 1919, two expeditions organized by Arthur Eddington photographed stars near the sun made visible during a solar eclipse. The displacement of these stars with respect to their true positions on the celestial sphere showed that the sun’s gravity does cause space to curve so that starlight traveling near the sun is bent from its original path. This observation confirmed Einstein’s theory, and made Einstein a household name.

Interestingly, Einstein’s theories contained elements he himself could not accept. In some ways, he was loathe to break too much from the Newtonian/Maxwellian theories upon which his work was built.

He never accepted some of the precepts of quantum mechanics, for example, such as the idea of indeterminacy. By the late 1920s, quantum mechanics had moved to the forefront of modern physics, yet Einstein never fully accepted many of the new theories. He declared:

God does not play dice.

Also, Einstein’s 1916 theory suggested that the universe should be either expanding or contracting. Einstein could not accept that notion, and so in 1917 he introduced a cosmological constant into his theory, which would allow the universe to be stationary. In 1929, however, Edwin Hubble obtained observational evidence that the universe is indeed expanding. Einstein was forced to revise his theory. He called introducing the cosmological constant his greatest blunder.

This part of the Einstein legend illustrates, perhaps, a reason for his global popularity. The great genius could envision mechanisms of the universe in a way many of us have trouble even grasping. His imagination gave him answers to questions most of us would not think to ask.

Yet he remained prone to biases and frailties and thereby thoroughly human … just like the rest of us.