A better way to convert dog years to human years

Researchers collected DNA samples from 104 Labrador retrievers over a 16-year period. They compared changes in their DNA samples against DNA previously collected from humans. The result? A better sense of what a “dog year” really means. 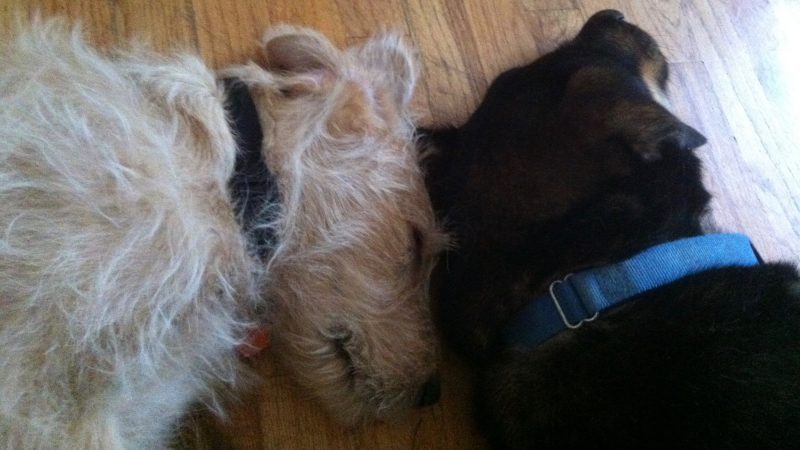 On the left, a young dog (Jack), and on the right, an old dog (Snoop). Photo by Deborah Byrd.

What does it mean for us humans to age, and what does it mean for your dog to age? Turns out these two processes can be compared, some scientists are now saying, and we don’t mean in the sense of the old adage that one dog year equals seven human years. That old saying has been recognized for some time as being, quite clearly, imprecise. If it were true, then – like dogs – humans should be able to reproduce at age 7. Many of us should live to be 150. Now, however, the tools of science have been applied to the question of true length of dog years. Biologist Tina Wang led new research at Ideker Lab at the UC San Diego School of Medicine. The work has resulted in a better formula for calculating your dog’s age in human years. It stems from data on the effects of aging on dogs’ DNA. It takes breed size into account. The new formula suggests that a 1-year-old dog is closer to age 30 than age 7.

We humans and our dogs (and all other living things) have DNA within our cells, coded with the genetic information, inherited from generations of those who came before us. But aging isn’t just about genetics. It’s also about a healthy or unhealthy lifestyle, for example, and about whether you contract a disease. Scientists who study aging are now speaking of the effects of these environmental factors in terms of chemical markers on our DNA. These markers – specifically methyl groups – tag our DNA. According to a emerging theory of aging, it’s the changing pattern of these tags throughout our lives that determines whether you look and seem “young for your age” or instead age prematurely. This process – the chemical modification of a person’s DNA over a lifetime – creates what aging researchers call an epigenetic clock

The researchers looked at DNA samples from 104 Labrador retrievers spanning a 16-year age range. They compared changes in their DNA samples against DNA previously collected from 320 humans between the ages of 1 and 103. They specifically looked for similarities in the methylation process between the two sets. Writing in the Washington Post on November 28, 2019, Christopher Ingraham explained that the researchers:

… found that the DNA profiles evolved in similar ways across the life span of both [dogs and humans].

UCSD’s Trey Ideker, leader of the lab that ran the study, told The Post:

If you look at the methylomes of 2-year-old Labs and you ask what are the closest human methylomes? The answer is that the best matches are in humans about 40 years old. That is just what the data show, no more, no less.

An example of the new dog aging chart – using, for the sake of comparison, movie star Tom Hanks – is below. 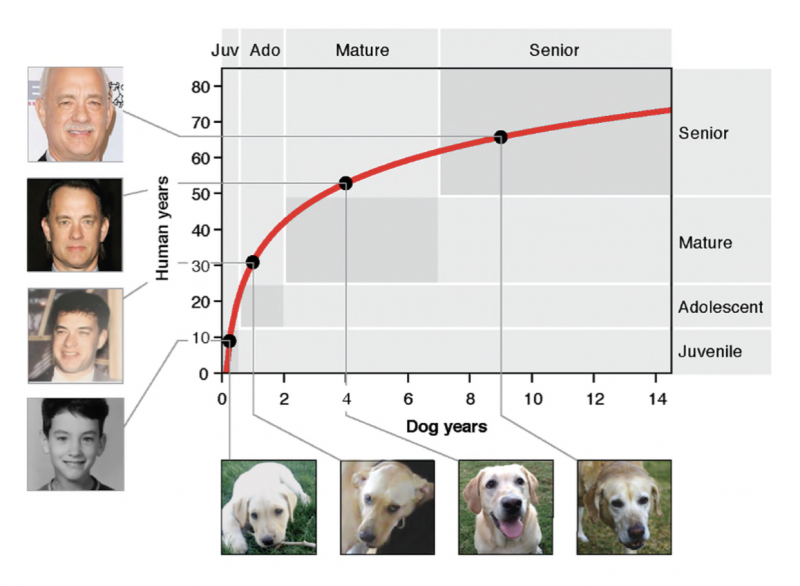 Wang, Ideker and colleagues illustrated their findings using 2 beloved icons: a Labrador and Tom Hanks. Here’s the Washington Post’s explanation of this chart: “According to the DNA analysis, a 1-year-old Lab is equivalent to a “Big“-era Hanks, while a 4-year-old mirrors the actor’s star turn in “The Da Vinci Code.” By age 9, a Lab has obtained the approximate gravitas of Hanks starring as Ben Bradlee in “The Post.” Chart via Wang et al. and the Washington Post.

Want the actual formula for adjusting dogs’ ages to human years? You have to multiply the natural logarithm of the dog’s age by 16 and add 31. Thus the formula is:

Plus, you’ll find an easy-to-use dog age calculator in this article by Virginia Morell in Science on November 15, 2019.

Why study dog aging at all? As Morell points out in her article, it’s not just dogs and humans that undergo DNA methylation as they age. Mice, chimps and wolves have also been shown to have epigenetic clocks. Using dogs to study aging makes sense because dogs live in our homes, and many – like their human owners – receive once-a-year medical checkups and sometimes hospital treatments. Thus studying aging in dogs is another way of understanding how humans age.

Morell also spoke to Matt Kaeberlein, a biogerontologist at the University of Washington in Seattle, who was not involved with this research but whose lab is conducting a Dog Aging Project (open to all breeds) that includes epigenetic profiles of its canine subjects. He hopes to find out why some dogs develop disease at younger ages or die earlier than normal, whereas others live long, disease-free lives. Kaeberlein told Morell:

We already knew that dogs get the same diseases and functional declines of aging that humans do, and this work provides evidence that similar molecular changes are also occurring during aging.

It’s a beautiful demonstration of the conserved features of the epigenetic age clocks shared by dogs and humans. 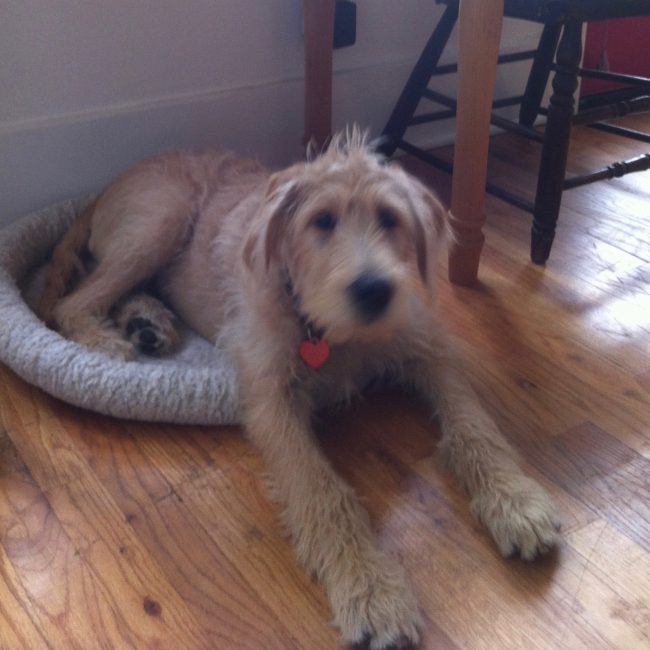 Here’s Jack again when he was 6 or 7 months old. He grew fast! According to the new formula devised by UC San Diego aging researchers, he would have been in his late teens or early 20s when this photo was taken.

Bottom line: A team of researchers on aging at the University of California San Diego performed a genetic analysis of dogs and humans and discovered that – compared with humans – dogs age faster at first. They reach the equivalent of human middle age after only a few years.