Researchers analyzed the DNA from a tooth belonging to the 7,000-year-old remains of European hunter-gatherer to determine his appearance. 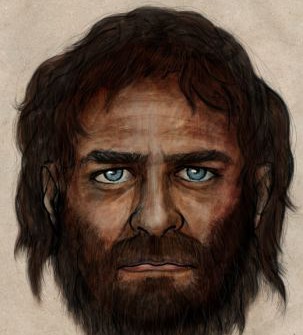 They say the man – who scientists named La Braña 1 – had blue eyes and dark skin.

The remains were recovered at La Braña-Arintero site, a cave in Valdelugueros in Spain in 2006. Carles Lalueza-Fox, of the Institute of Evolutionary Biology in Barcelona, was the leader of the study. He said:

The biggest surprise was to discover that this individual possessed African versions in the genes that determine the light pigmentation of the current Europeans, which indicates that he had dark skin, although we can not know the exact shade.

Even more surprising was to find that he possessed the genetic variations that produce blue eyes in current Europeans, resulting in a unique phenotype in a genome that is otherwise clearly northern European.

The man lived in the Mesolithic, a period from 10,000 to 5,000 years ago, between the Paleolithic and the Neolithic, that ends with the advent of agriculture and livestock farming, coming from the Middle-East. The arrival of the Neolithic, with a carbohydrate-based diet and new pathogens transmitted by domesticated animals, entailed metabolic and immunological challenges that were reflected in genetic adaptations of post-Mesolithic people. Among these is the ability to digest lactose, which the La Braña individual could not do.

The study of the genome suggests that current populations nearest to La Braña 1 are in northern Europe, such as Sweden and Finland.

Lalueza-Fox said that these findings indicate that there is genetic continuity in the populations of central and western Eurasia.

The research is published in Nature.