Pure silly science? Don’t be fooled. Many awards were for serious research published in reputable journals. “Laugh, then think,” say the organizers. 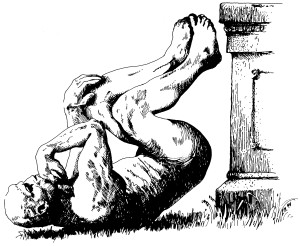 Each year, before Nobel Prizes are announced in Stockholm, Sweden, the Ig Nobel Prizes are awarded at a side-splitting ceremony at the Sanders Theater at Harvard University in Cambridge, Massachusetts. This parody of the Nobel Prizes has been having a little fun with science since its inception in 1991, awarding 10 prizes each year to a variety of research disciplines that include medicine, economics, physics, and, just for laughs, peace. The 2013 Ig Nobel Prizes were awarded on September 12, in the presence of 1,200 ardent fans and thousands watching via live video stream, with its typical offbeat mix of awards, skits, and onstage science experiments. Prize winners were honored for works that included the effects of opera on mice recovering from heart transplants, the discovery that dung beetles could navigate using stars in the Milky Way, and research confirming that drunk people think they’re attractive.

The Ig Nobel events are organized by the Annals of Improbable Research, a bi-monthly magazine featuring the funny side of science. On their website, they explain the philosophy behind Ig Nobels: 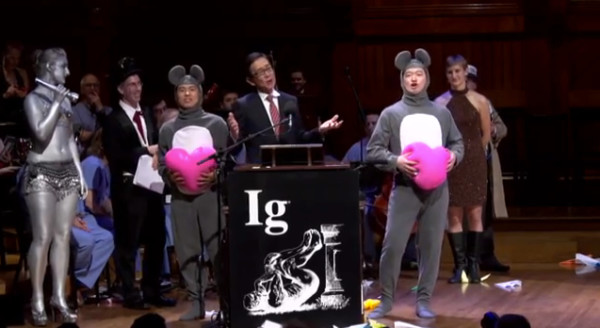 The lead author of the paper that won the Ig Nobel medical prize speaks, while his co-authors hum music from Giuseppe Verdi’s opera La Traviata. Image via Improbable Research Inc. 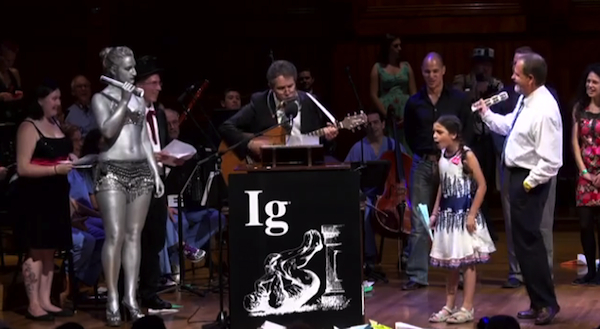 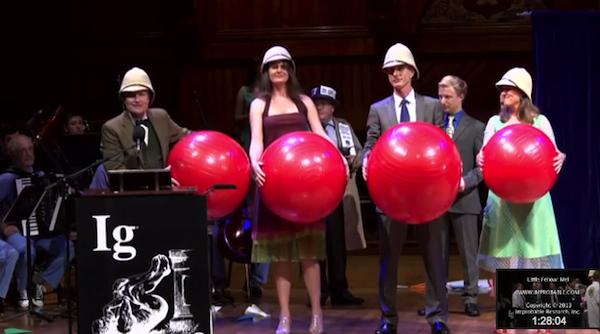 2013 Ig Nobel Joint Prize in Biology and Astronomy winners. The balls symbolize the “balls” they have for daring to do such unique research. Image credit: Improbable Research Inc.

Joint Prize in Biology and Astronomy: Marie Dacke, Emily Baird, Marcus Byrne, Clarke Scholtz, and Eric J. Warrant, for discovering that when dung beetles get lost, they can navigate their way home by looking at the Milky Way. Four of the authors spoke in turn, starting with “some people think that science is crap ….” (Dung Beetles Use the Milky Way for Orientation, Current Biology, January 2013) 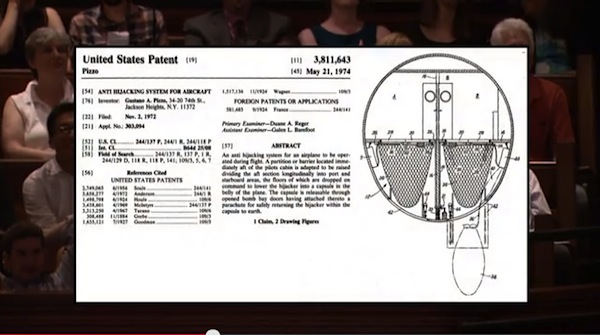 Safety/Engineering Prize: The late Gustano Pizzo, for inventing an electro-mechanical system to trap airplane hijackers. The system drops a hijacker through trap doors, seals him into a package, then drops the encapsulated hijacker through the airplane’s specially-installed bomb bay doors, whence he parachutes to Earth, where police, having been alerted by radio, await his arrival. US Patent #3811643, Gustano A. Pizzo, anti-hijacking system for aircraft, May 1972. 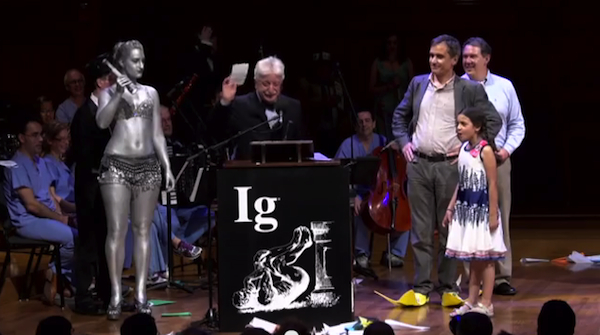 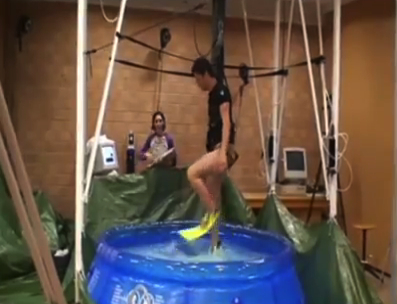 Physics Prize: Alberto Minetti, Yuri Ivanenko, Germana Cappellini, Nadia Dominici, and Francesco Lacquaniti, for discovering that some people would be physically capable of running across the surface of a pond — if those people and that pond were on the moon. Several of the authors accepted the prize in person. They played a video clip of the experiment, a man wearing yellow fins, attached to a harness, trying to walk on water in a kiddie pool. (Humans Running in Place on Water at Simulated Reduced Gravity, PLoS ONE, vol. 7, no. 7, 2012) 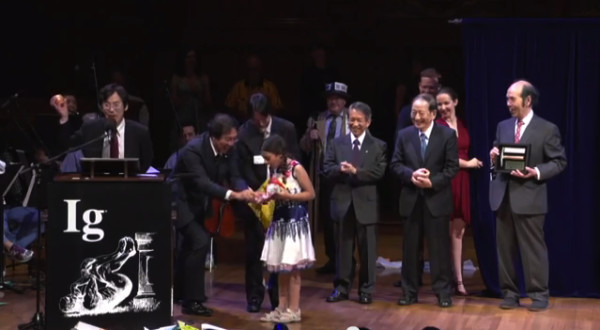 All the authors were present to accept the prize in person, wiping off tears during the acceptance speech. Miss Sweetie Poo, summoned to make them stop, was presented with a gift of onions. 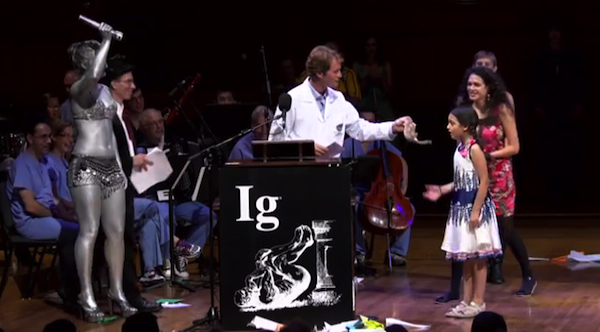 Archaeology Prize: Brian Crandall and Peter Stahl, for parboiling a dead shrew, then swallowing the shrew without chewing, then carefully examining everything excreted during subsequent days. They wanted to see which bones would dissolve inside the human digestive system, and which bones would not. (Human Digestive Effects on a Micromammalian Skeleton, Journal of Archaeological Science, vol. 22, November 1995)

Crandall accepted the prize, pleased to be finally recognized for an experiment he conducted 20 years ago as an undergraduate. Forced to cut his speech short by Miss Sweetie Poo, he took the opportunity to present her with a shrew. Today, Crandall is co-owner of Mad Science of the Mid-Hudson, an organization that develops and delivers, quoted from their website, “unique, hands-on science experiences for children that are as entertaining as they are educational.” 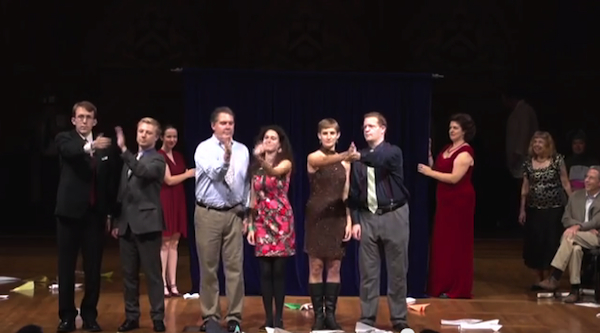 Peace Prize: Alexander Lukashenko, president of Belarus, for making it illegal to applaud in public, and to the Belarus State Police, for arresting a one-armed man for applauding. The audience was asked not to applaud and were given a demonstration of one-handed clapping. 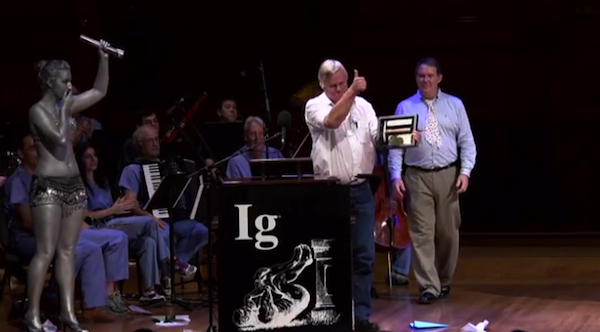 Probability Prize: Bert Tolkamp, Marie Haskell, Fritha Langford, David Roberts, and Colin Morgan, for making two related discoveries. First, the longer a cow has been lying down, the more likely that cow will soon stand up. Second, once a cow stands up, you cannot easily predict how soon that cow will lie down again. (Are Cows More Likely to Lie Down the Longer They Stand? Applied Animal Behaviour Science, vol. 124, nos. 1-2, 2010)

The lead author, who has been studying cows for most of his career, began by remarking that cows can be really boring so he had to come up with a title to make the paper sound interesting. 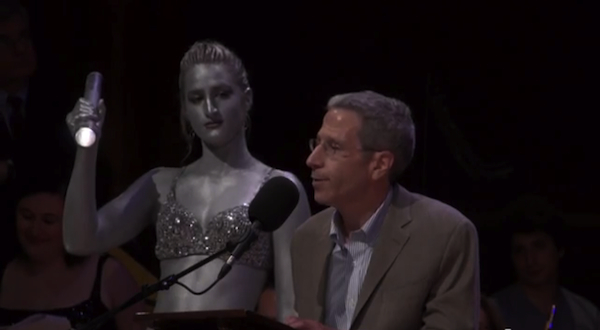 Public Health Prize: Kasian Bhanganada, Tu Chayavatana, Chumporn Pongnumkul, Anunt Tonmukayakul, Piyasakol Sakolsatayadorn, Krit Komaratal, and Henry Wilde, for the medical techniques described in their report Surgical Management of an Epidemic of Penile Amputations in Siam — techniques which they recommend, except in cases where the amputated penis had been partially eaten by a duck. (American Journal of Surgery, 1983, no. 146) 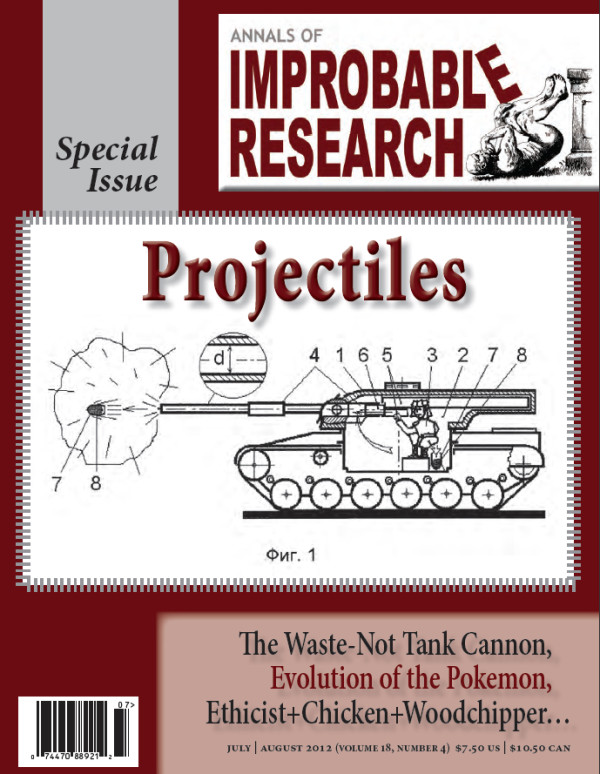 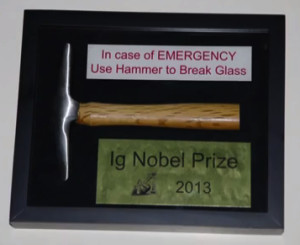 The Ig Nobel plaque, a hammer sealed inside a transparent glass box, with a sign that reads, “In case of EMERGENCY, use hammer to break glass.” Image via Improbable Research Inc. 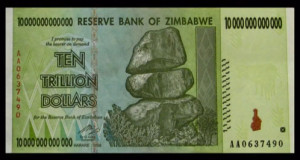 Marc Abrahams, known as the chief airhead, editor and co-founder of the Annals of Improbable Research, was master of ceremonies at the event. The evening began with a deluge of paper planes, thrown by the audience towards the stage (the ceremony would later end with more paper planes). On one side of the stage was a small orchestra of musicians dressed in scrubs, all of them physicians and medical researchers from Harvard and the Massachusetts Institute of Technology. Seated, at the other end of the stage, were VIP participants that included real Nobel laureates and distinguished university professors. A rather odd sight on the stage were two people covered in silver body paint and carrying a flashlight: they were the human spotlights that shone their flashlights on whoever was speaking.

Besides the presentation of Ig Nobels, the event was interspersed with science demonstrations, short scientific speeches on this year’s Ig Nobel theme, “Force,” and a win-a-date-with-a-Nobel-laureate drawing. The event also included a four-part mini opera, funny but cringeworthy, about a couple who patented a spinning human birthing machine.

Recipients of the 2013 Ig Nobels came from 18 countries: Australia, Belarus, Canada, China, Denmark, France, Germany, Italy, Japan, Netherlands, Poland, Russia, South Africa, Sweden, Switzerland, Thailand, UK, and USA. Many of them, traveling at their own expense, came to accept their prize in person with humorous speeches and even a little performance art.

The Ig Nobel prize plaque showcased a hammer sealed inside a transparent glass box, with a sign that said, “in case of emergency, use hammer to break glass.” The award came with a certificate, a piece of paper handwritten with “Ig Nobel Prize,” signed by several real Nobel Laureates.

There was also a cash prize, ten trillion dollars, in Zimbabwean currency (don’t bother looking up the exchange rate for US dollars, Zimbabwean notes are no longer in use).

Bottom Line:
The Annals of Improbable Research organized the 2013 Ig Nobel Prizes, awarded on September 12, 2013, continuing a tradition that began in 1991. Ten prizes were awarded for a variety of categories including medicine, economics, physics, psychology, and peace. The 2013 prize winners, from 18 countries, were honored for works that included the effects of opera on mice recovering from heart transplants, discovery that dung beetles could navigate using stars in the Milky Way, and evidence that drunk people think they’re attractive.