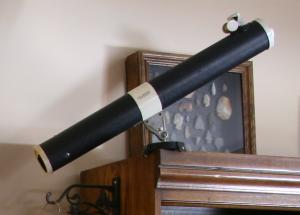 I have known Clay Sherrod since the early 1970s, going on 40 years now. Throughout that time, Clay has been a strong force for the promotion of astronomy as the “People’s Science” and the education of the public about the Universe. He established his own observatory facilities (actually two facilities comprising the Arkansas Sky Observatory) in Arkansas, where we both grew up and Clay still resides. I received an email from Clay a couple of days ago simply too good not to pass it on to you all. It regards an astronomical Christmas gift from 1953 and its remarkable oddysey from Clay’s childhood home to an attic more than a thousand miles away, and finally back to his office in Arkansas. Here is the email:

Thank you! Your submission has been received!
Oops! Something went wrong while submitting the form.
END_OF_DOCUMENT_TOKEN_TO_BE_REPLACED