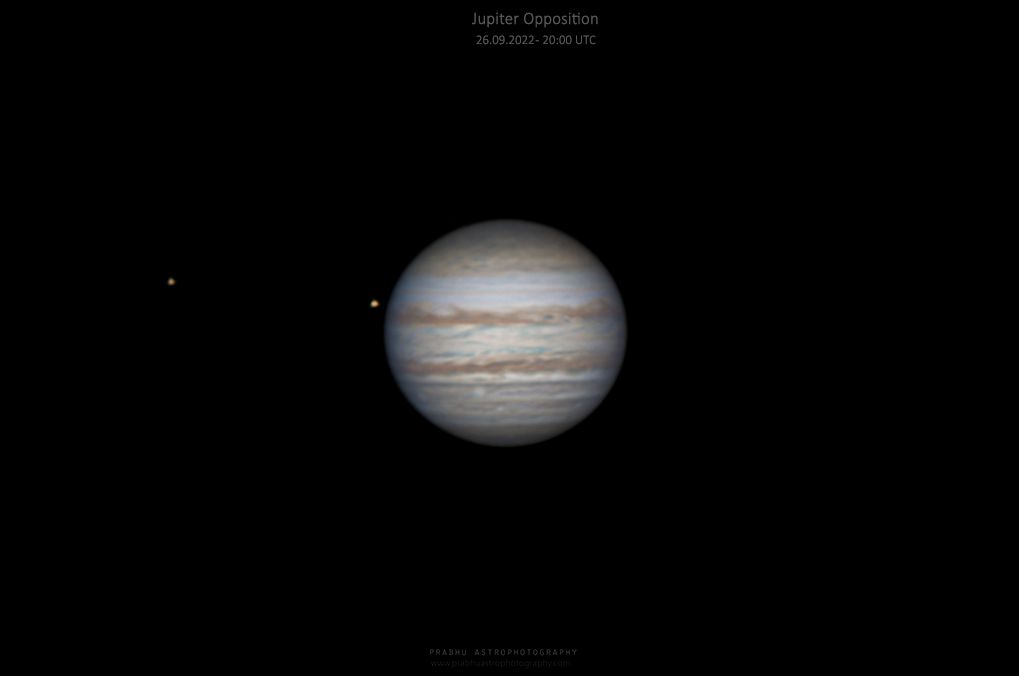 stacked 30% frame from 1 .5 minutes video captured at 20:00 UTC which as at the exact moment of the opposition

Jupiter was at the opposition on September 26 at 20:00 UTC at the time of the opposition Jupiter was at a distance of 3.95 AU or 591 million km or 33 light minutes from Earth. All the planets in the Solar System orbit around the Sun. At certain points during these orbits, the Earth finds itself directly between the Sun and another planet. This is the moment at which that planet is said to be 'in opposition'. During opposition, the planet appears at its largest and brightest, and it is above the horizon for much of the night. For stargazers and astrophotographers, it's an ideal time to view and photograph the superior planets. Jupiter’s opposition to the sun and closest approach to Earth fell on the same day. That’s because opposition took place so near in time to Jupiter’s perihelion – on January 21, 2023 – its closest point to the sun in its 12-year orbit. The juxtaposition of Jupiter’s opposition in September 2022, and perihelion in early 2023, brings the planet closer to Earth at this opposition than it has been for 59 years(since 1963). This image of Jupiter and its moons (left to right: Europa and Io) was captured using a 11" HD telescope at the exact moment of the opposition from the Mleiha Archaeological Center by Prabhu.