A zombie ant fungus must kill its ant host outside the ant colony, in order to to reproduce and transmit its infection, new research shows. But not far outside. 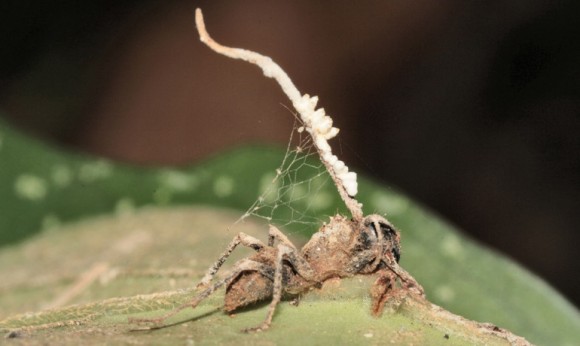 It’s not a pretty picture. After killing its host, a zombie ant fungus grows from the cadaver and produces spores, which rain down in the forest to infect new hosts. New research suggests this fungus must kill its ant hosts outside their nest in order to reproduce and transmit its infection. This may be partly because of the ants’ social immunity, which is a collective action taken to limit disease spread. And it may be partly due to the physical space and microclimate inside the nest, which don’t allow the fungus to complete its development. The new research, which was funded by CAPES-Brazil and Penn State, was published August 18, 2014 in PLOS ONE.

This parasitic fungus, Ophiocordyceps camponoti-rufipedis, is known as the zombie ant fungus because of its ability to control the behavior of its carpenter ant hosts. The fungus compels worker ants to die in a specific spot – attached to leaves in the understory of tropical forests.

After killing its ant host, the fungus grows a stalk which protrudes from the dead ant and infectious spores are dropped onto the forest floor below, where they can infect foraging ants from the colony.

In fact, according to this new research, the fungus manipulates its victims to die close to the colony, to ensure a constant supply of potential new hosts. 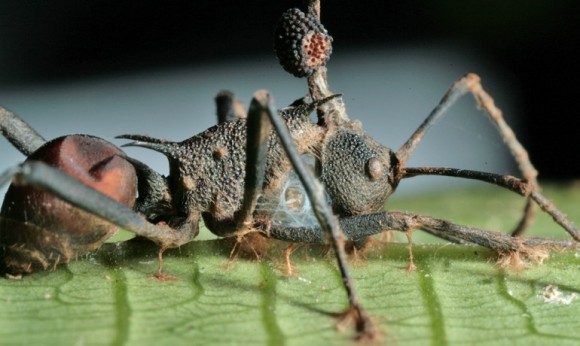 Ants are remarkably adept at cleaning the interior of the nest to prevent diseases. But we also found that this fungal parasite can’t grow to the stage suitable for transmission inside the nest whether ants are present or not.

But the zombie fungus gets its dying victims as close as possible. If not inside the ant colony, then on the doorstep.

What the zombie fungi essentially do is create a sniper’s alley through which their future hosts must pass. The parasite doesn’t need to evolve mechanisms to overcome the effective social immunity that occurs inside the nest. At the same time, it ensures a constant supply of susceptible hosts. 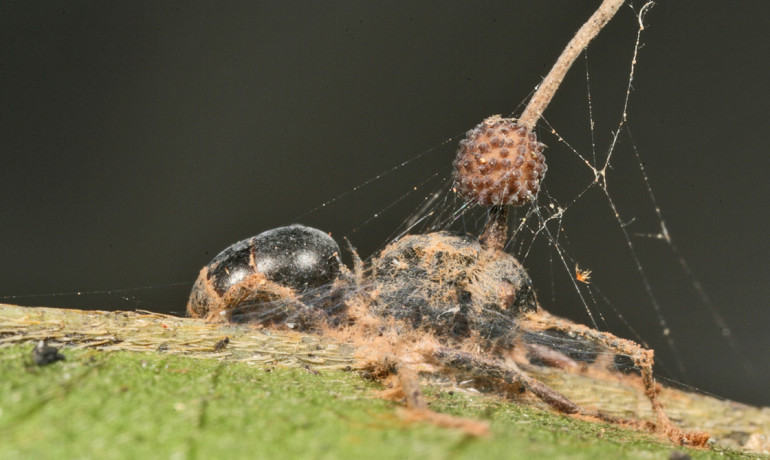 “What the zombie fungi essentially do is create a sniper’s alley through which their future hosts must pass,” David Hughes says. Photo via David Hughes/Penn State

Despite the high prevalence of infected colonies and persistence of the fungus over time, the researchers did not observe colony collapse, suggesting that the parasite functions as a long-lasting but tolerable condition for the ants.

The researchers suggest that the parasite can be characterized as a chronic disease that, as in humans, can be controlled but not cured.