Weather, travel, and poverty may facilitate summertime outbreaks of Zika virus in many U.S. cities in summer, 2016, a new study shows. 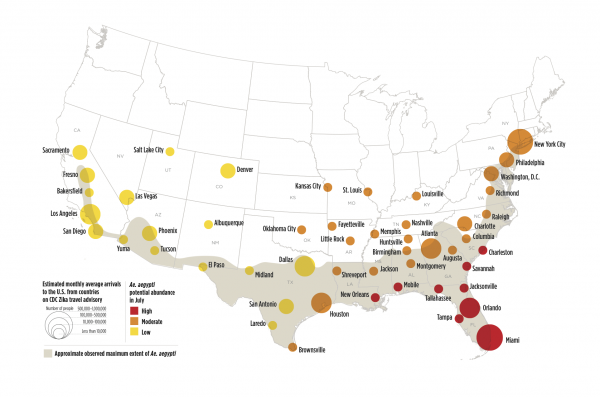 View larger. | The colored circles show dozens of U.S. cities that, this summer, might have low, moderate, or high populations of the mosquito species that transmits Zika virus. The shaded portion of the map shows where the mosquito has already been observed. The mosquitos may be in additional cities because of summertime’s heat and humidity, a new study shows. In addition, Zika risk may be elevated in cities with more air travelers arriving from Latin America and the Caribbean (larger circles). Image via NCAR.

Mosquito and disease experts at the National Center for Atmospheric Research (NCAR) have determined that – in some 50 U.S. cities in the summer of 2016 – factors that can combine to produce a Zika virus outbreak are likely to be present. Zika virus has so far affected people primarily in Latin America and the Caribbean. It’s carried by the Aedes aegypti mosquito. According to a NCAR March 16, 2016 statement from NCAR, the virus-carrying mosquito:

… will likely be increasingly abundant across much of the southern and eastern United States as the weather warms.

Summertime weather conditions are favorable for populations of the mosquito along the East Coast as far north as New York City and across the southern tier of the country as far west as Phoenix and Los Angeles, according to specialized computer simulations conceived and run by researchers at NCAR and the NASA Marshall Space Flight Center.

Spring and fall conditions can support low to moderate populations of the Aedes aegypti mosquito in more southern regions of its U.S. range. Wintertime weather is too cold for the species outside southern Florida and southern Texas, the study found.

By analyzing travel patterns from countries and territories with Zika outbreaks, the research team further concluded that cities in southern Florida and impoverished areas in southern Texas may be particularly vulnerable to local virus transmission.

The scientists stressed that, even if Zika establishes a toehold in the mainland United States, it is unlikely to spread as widely as in Latin America and the Caribbean. This is partly because a higher percentage of Americans live and work in air-conditioned and largely sealed homes and offices.

First identified in Uganda in 1947, the Zika virus has moved through tropical regions of the world over the past decade. It was introduced into Brazil last year and spread explosively across Latin America and the Caribbean, with more than 20 countries now facing pandemics.

About 80% of infected people do not have significant symptoms, and most of the rest suffer relatively mild flu- or cold-like symptoms that generally clear up in about a week.

However, scientists are investigating whether contracting the disease during pregnancy can lead to microcephaly, a rare birth defect characterized by an abnormally small head and brain damage.