The new study also suggests that the supervolcano under Yellowstone National Park was much more explosive in its early history and could be slowing down.

Explosions from volcanic super-eruptions have been some of the most extreme events in Earth’s history, ejecting enormous volumes of material – at least 1,000 times more than the 1980 eruption of Mount St. Helens – with the potential to alter the planet’s climate.

Now, in a study published June 1, 2020, in the peer-reviewed journal Geology, researchers have announced the discovery of two newly identified super-eruptions that occurred 9.0 and 8.7 million years ago, associated with the Yellowstone hotspot track – a volcanic hotspot responsible for large scale volcanism in Idaho, Montana, Nevada, Oregon, and Wyoming. The researchers believe the younger of the two – known as the Grey’s Landing super-eruption – was the volcanic province’s largest and most cataclysmic event. Volcanologist Thomas Knott of University of Leicester is the paper’s lead author. Knott said in a statement:

Based on the most recent collations of super-eruption sizes, it is one of the top five eruptions of all time. 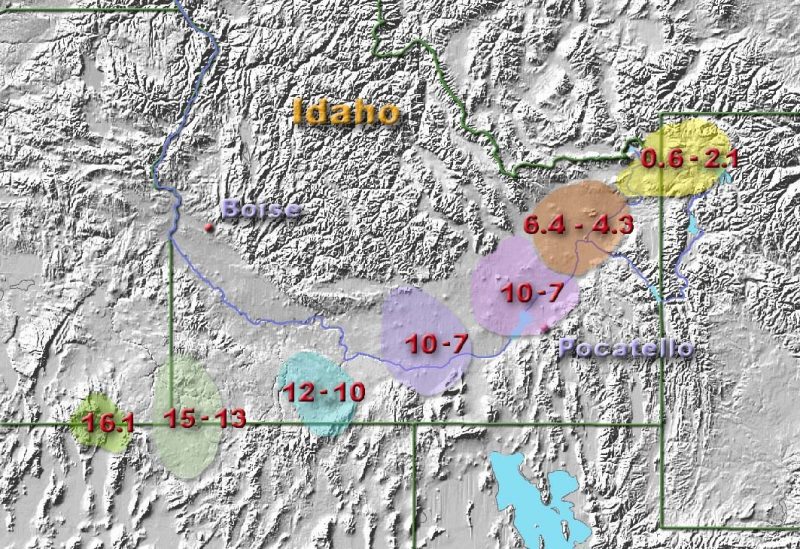 The results indicate the hotspot, which today fuels the famous geysers, mudpots, and fumaroles in Yellowstone National Park, may be waning in intensity. Knott told Scientific American that although the current rate of eruptions suggests that another explosion will not occur for roughly 900,000 years, this estimate is simply a historical average, and it doesn’t forecast how and when nature will act. He said:

We don’t want to encourage complacency – nor do we want to fearmonger. 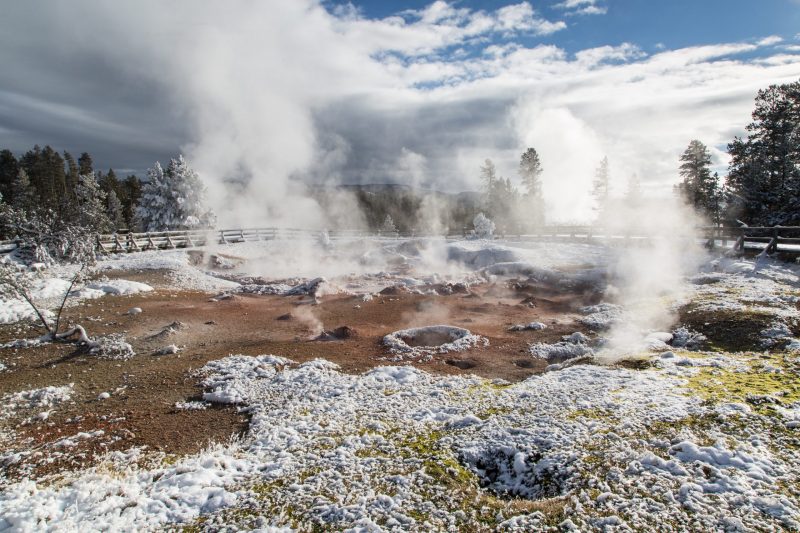 The team used a combination of techniques to correlate volcanic deposits scattered across tens of thousands of square kilometers. Knott said:

We discovered that deposits previously believed to belong to multiple, smaller eruptions were in fact colossal sheets of volcanic material from two previously unknown super-eruptions at about 9.0 and 8.7 million years ago.

The younger of the two, the Grey’s Landing super-eruption, is now the largest recorded event of the entire Snake-River–Yellowstone volcanic province.

The team estimates the Grey’s Landing super-eruption was 30% larger than the previous record-holder (the well-known Huckleberry Ridge Tuff) and had devastating local and global effects. Knotts said:

The Grey’s Landing eruption enameled an area the size of New Jersey in searing-hot volcanic glass that instantly sterilized the land surface. Anything located within this region would have been buried and most likely vaporized during the eruption.

Particulates would have choked the stratosphere, raining fine ash over the entire United States and gradually encompassing the globe.

Both of the newly discovered super-eruptions occurred during the Miocene, the interval of geologic time spanning 23–5.3 million years ago. Knott said:

These two new eruptions bring the total number of recorded Miocene super-eruptions at the Yellowstone–Snake River volcanic province to six. This means that the recurrence rate of Yellowstone hotspot super-eruptions during the Miocene was, on average, once every 500,000 years.

By comparison, Knott says, two super-eruptions have – so far – taken place in what is now Yellowstone National Park during the past three million years. He said:

It therefore seems that the Yellowstone hotspot has experienced a three-fold decrease in its capacity to produce super-eruption events. This is a very significant decline.

But the new findings, says Knott, have little bearing on assessing the risk of another super-eruption occurring today in Yellowstone.

We have demonstrated that the recurrence rate of Yellowstone super-eruptions appears to be once every 1.5 million years. The last super-eruption there was 630,000 years ago, suggesting we may have up to 900,000 years before another eruption of this scale occurs.

Bottom line: A new study has identified the biggest eruption in the history of the Yellowstone supervolcano and also suggests that its activity might be slowing.

Via Geological Society of America