Do me a favor. When talking about organic or unprocessed foods, don’t say, “food without chemicals” say “food without added chemicals”. Because, without chemicals, food would pretty much cease to exist. The proteins and sugars and fats in our foods are all chemicals. Vitamin C is a chemical (formula C6H8O6). Water is a chemical (formula H2O). You get the idea. Chemicals also account for the enticing smells (and thus much of the taste) of foods. Such compounds are classified as “volatiles”, because they readily vaporize and travel to the scent receptors in your nose. Some foods get their characteristic aroma from just one or two volatiles. Bananas are a good example of such single note smells. Other edibles, like the tomatoes whose flavor chemistry was explored earlier this year, are complex chords, with many chemicals harmonizing to yield the overall smell. And then there’s the durian fruit. If a banana were a C note, and a tomato were D augmented 7th chord, then a durian would be the sound made when you accidentally sit on your piano. 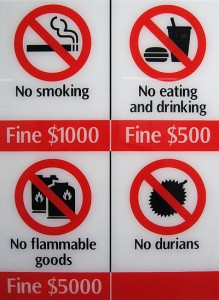 No durians allowed on the Singapore subway. Image: furibond.

Encounters with durian rarely leave neutral impressions. To its fans, the spikey Southeast Asian delicacy is “the king of fruits” revered for its unique, pungent aroma and rich, creamy pulp. Detractors view it more as a botanical abomination. A noxious medieval battle flail oozing with fetid slime pods. In regions where the fruit is popular, it is often banned in hotels, on public transportation, and anywhere else it might inflict its sensory assault on non-consenting bystanders. (No trip to Southeast Asia is complete without a photograph of a “no durians” sign.)

What gives durian its opinion-polarizing power is the confusing mixture of scents the fruit none-too-gently wafts at its consumers. Some components are sweet and fruity, others are reminiscent of onion and rotten eggs. It’s a lot for your olfactory system to parse in one mouthful.

Scientists have been trying to nail down the intricacies of durian stink since the 1970s but there’s still work to be done. The latest effort, published in the Journal of Agriculture and Food Chemistry, added 24 previously unreported chemical compounds the odoriferous inventory (while also confirming 20 or so old standards).* In keeping with durian tradition, the newly catalogued volatiles were a sweet and rancid mix of clashing fragrances. Scents ranged from the pleasant (honey, citrus, caramel) to the fine if not very fruit-like (roasted onion, “soup seasoning”) to the truly retch-worthy (sulfury, skunky, rotten). 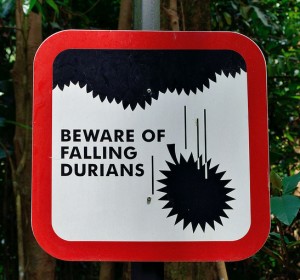 The smell isn’t the only problem. Image: Tristan Schmurr.

After glancing at the long list of old and new unpronounceable chemicals comprising durian’s signature stench, my boyfriend was quick to point out that two of the highly volatile compounds** had the distinction of being listed as hazardous air pollutants by the EPA under the Clean Air Act – acetaldehyde (fruity) and hydrogen sulfide (rotten egg). Unfortunately the current study did not report the hourly emission rates of these chemicals, so it’s hard to say if cracking open a durian in a public space would count as a violation of environment regulations.

The authors did, however, examine the potency of the individual volatiles. This is measured in flavor dilution (FD) factor. It’s a fairly straightforward technique – just take your volatile and dilute it until the smell is no longer detectable. The FD factor is a number indicating how many rounds of dilution were needed to subdue the stink of any given odorant. Based on FD factors reported in the latest study, the durian’s top 5 aggressively strong smells are as follows:

4)   a three-way tie between sulfury/onion, caramel, and soup seasoning (all at FD 512)

5)   another tie, this time between fruity, skunky, sulfury, and roasted onion (FD 256)

So basically, a durian smells like a mixture of fruit, onions and rotten eggs, garnished with honey, “soup seasoning”, and a dash of skunk spray. It’s easy to see why this fruit has something of a niche audience. 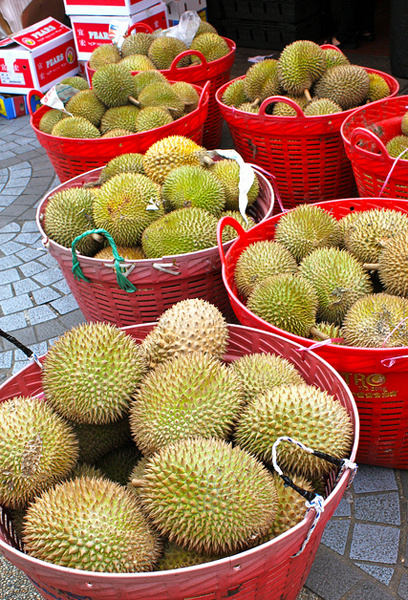 But in defense of the durian let’s also consider what was NOT found in this study, namely the main compounds responsible for providing so-called “carrion flowers” with their famous fly-attracting, rotting flesh smell (putrescine, cadaverine, and several dimethyl sulfides). So while it may be fair to say that durian smells like garbage, you should specify that it’s a meat-free dumpster containing festering fruit, onions, and cabbage perhaps, but at least no expired steak and past-prime rib.

To definitely assign the credit/blame for the durian’s ususual stink parade, we would also need more concrete numbers on how much of each odorant is emanating from the fruit, something the current study didn’t tackle. It’s also worth noting that the authors only examined one cultivar of durian – the D. zibethinus ‘Monthong’ which is the most commonly found specimen in Thai markets. There are hundreds of other cultivars out there. Who knows what additional smells await the more adventurous durian consumer.

I myself have never had the pleasure of biting into a chunk of fresh, ripe durian. My favorite fruit juice smoothie claims to contain the stuff, but I’m starting to suspect they’re using some sort of frozen or attenuated durian (signs: smoothie store smells normal, no screams of agony emanating from the kitchen during smoothie production) possibly even the blasphemous de-stinked durian that EarthSky contributor Shireen Gonzaga warned us of after I mentioned I’d be blogging about the fruit. I did a little reading on unscented durians and they just seem sort of sad, like seedless watermelons, or declawed cats. But then, at least you could have one in your rental car without being charged an hefty cleaning fee.

* Not all volatiles are “aroma-active” (i.e., smellable). Some previous durian studies logged around 200 volatiles, but did not determine whether these produced any odor.

** For those interested in the gory chemistry details: most of the identifications were done using aroma extract dilution analysis (AEDA), but since a handful of the compounds were so rarin’ to evaporate (i.e., highly volatile) that they wouldn’t withstand this process, a second technique – static headspace gas chromatography-olfactometry (SH-GC-O) – was also employed.