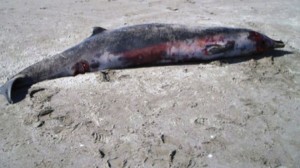 This spade-toothed beaked whale, considered the world’s rarest whale, has been spotted for the first time in New Zealand. The whale stranded and died on a beach in December 2010. (New Zealand Department of Conservation)

Thank you! Your submission has been received!
Oops! Something went wrong while submitting the form.
END_OF_DOCUMENT_TOKEN_TO_BE_REPLACED