An albatross named Wisdom is thought to be the oldest wild bird – and the oldest bird mom – in the world. Her latest chick hatched in early February on Midway Atoll. 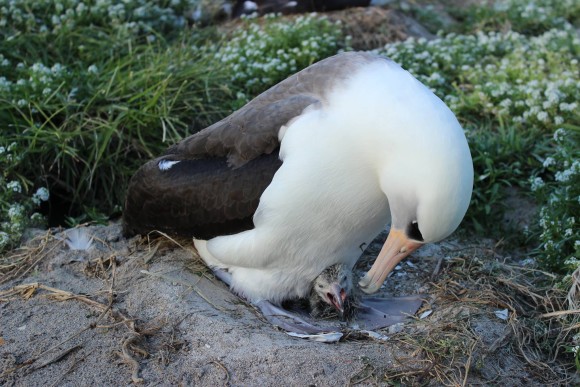 Experts at the U.S. Fish and Wildlife Service say that Wisdom the Laysan albatross is the oldest bird they know of in the organization’s 90-year history. At 63, Wisdom hatched another chick in early February at the Midway Atoll National Wildlife Refuge, the small atoll in the North Pacific between Honolulu and Tokyo. Researchers think she could have raised as many as 35 chicks in her life.

Wisdom, now sporting her 6th band as part of the USGS Bird Banding Program, was first banded in 1956. Researchers say that Wisdom has logged at least two to three million miles since she was first banded. That’s more than four to six trips from the Earth to the moon and back again.