“We did not know the fungus can grow so huge,” said Professor Yu-Cheng Dai, who made the discovery. “A small piece of the fruiting body is almost like my size.”

The BBC reported on Monday (August 1, 2011) that a Chinese professor has discovered the most massive fruiting body of any fungus yet documented, growing on the underside of a tree in Hainan Province, China. He and his team described their finding in the journal Fungal Biology. 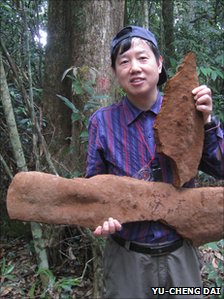 The length of the fungus is 10 meters (33 feet). It is 80 centimeters (31 inches) wide and weighs half a metric tonne (about half a ton). Tests on the density of the fruiting body suggest the whole thing weighs 400-500 kilograms (about 1,000 pounds). The new giant fungus is thought to be at least 20 years old and to hold some 450 million spores.

A mushroom by any other name

This fruiting body is equivalent to the mushrooms produced by other fungi species. Fruiting bodies, such as mushrooms and toadstools, are the sexual stages of many higher types of fungi, producing seeds or spores that produce further generations. This one shatters the record held previously by a fungus growing in Kew Gardens in the UK, according to the BBC.

Professor Yu-Cheng Dai of the Herbarium of biology at the Chinese Academy of Sciences in Shenyang – and his assistant Dr. Cui – recorded the first example of this type of fungus in 2008. Professor Dai told the BBC that the sample they collected was not large. Then, in 2010, they found the giant one in Hainan Province. He said:

We did not know the fungus can grow so huge. A small piece of the fruiting body is almost like my size.

The fungus was growing on the underside of a tree, Professor Dai said. (Courtesy Yu-Cheng Dai, via BBC)

The fungus, F. ellipsoidea, is what mycologists call a perennial polypore – otherwise known as a bracket fungus. Professor Dai said:

We were surprised when we found it, and we did not recognize it in the forest because it is too large.

By colonizing the underside of the large fallen tree, the fungus also had a huge amount of dead and decaying wood to feed on, helping to fuel its growth.

Bottom line: Professor Yu-Cheng Dai of the Herbarium of biology at the Chinese Academy of Sciences in Shenyang has discovered the world’s largest fungus growing underneath a tree in Hainan Province, China.