World population unlikely to stabilize in this century

Experts used “scenarios” to suggest global human population will stabilize around 9 billion by about 2050. A new statistical analysis tells a different story. 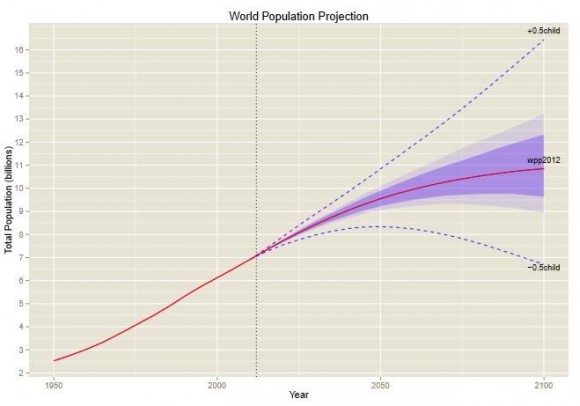 For at least a decade, experts have said that world population will likely stabilize at around 9 billion by the middle of this century. Scientists at the University of Washington and the United Nations, however, have now used a new mathematical method to conclude there is an 80% probability that world population – now at 7.2 billion – will not stabilize. Instead, according to their analysis, it will increase to between 9.6 and 12.3 billion by 2100. The journal Science published these scientists’ work online on September 18, 2014.

These scientists used modern statistics, known as Bayesian statistics, to generate new projections they say are less uncertain than earlier United Nations’ estimates. According to Ben Thomas of Discovermagazine.com:

The newer forecast uses Basyesian statistical methods — a first for the U.N. reports — to combine government data and expert forecasts for such things as mortality rates, fertility rates and international migration.

According to the new projections, much of the increase in world population will occur in Africa, where population quadruples from around 1 billion today to 4 billion by the end of the century. One reason is that birth rates in sub-Saharan Africa have not been going down as fast as had been expected. There is an 80 percent chance that the population in Africa at the end of the century will be between 3.5 billion and 5.1 billion people, according to these scientists.

Meanwhile, the study projects that Asia – now home to 4.4 billion – will peak in population at around 5 billion people in 2050 and then begin to decline. Populations in North America, Europe, and Latin America and the Caribbean are projected to stay below 1 billion each.

Other regions of the world are projected to see less change.

First author on the new study is U.N. demographer Patrick Gerland. He’s a senior analyst at the U.N.’s Department of Economic and Social Affairs. He said the figures largely support U.N. projections from 2013 but add a new dimension. He said:

Earlier projections were strictly based on scenarios [a way of developing alternative futures based on different combinations of assumptions, facts and trends], so there was no uncertainty. This work provides a more statistically driven assessment that allows us to quantify the predictions, and offer a confidence interval that could be useful in planning.

Read more about the new study from University of Washington 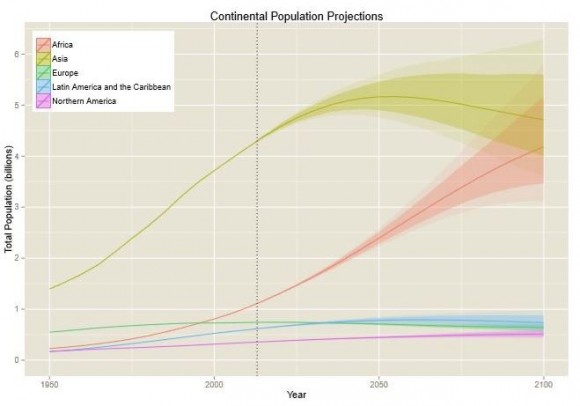 Population projections for each continent.

The numbers above are all estimates, of course. Scientists do not and cannot know with certainty even how many people live on Earth today. They are not predicting how many people will be alive when this century ends; they can only make projections based on various kinds of analyses. These are the best guesses, really the only guesses, that humanity has.

The good news here is that these new projections have arrived while this century is still young. A renewed focus on population as a key issue could help stabilize world population, after all. Prior studies have indicated that two factors are successful at decreasing fertility rates. They are more access to contraceptives and education of girls and women. These scientists suggest that Africa, in particular, would benefit greatly by acting now to lower its fertility rate.

Bottom line: For over a decade, experts have said that Earth’s human population would stabilize at around 9 billion around the middle of this century. A new study suggests it will not stabilize, but instead continue to grow throughout the century. Much of the growth will take place in Africa.

World Population Data Visualization 2014 and Beyond

Human Numbers Through Time, via NOVA