Wisdom has a new egg!

Recent photos of Wisdom – the world’s oldest known, banded wild bird at an estimated age of 63 – with her newest egg. Go, Wisdom! 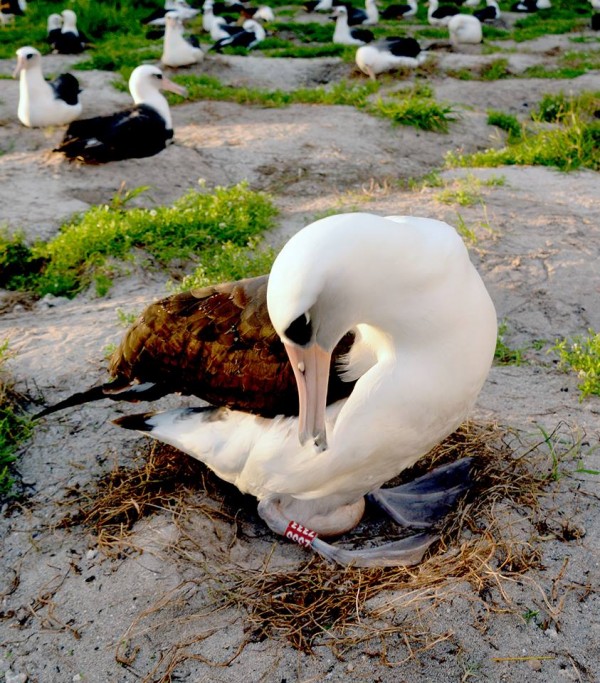 Wisdom and her new egg. Photo by Greg Joder via USFWS Pacific Region on Tumblr

Awesome news! A Laysan albatross named Wisdom – said to be the world’s oldest known, banded, wild bird at an estimated age of 63 – has been photographed (December, 2014) incubating her newest egg. Go, Wisdom! Still breeding at 63!

Wisdom returns to Midway Atoll National Wildlife Refuge and Battle of Midway National Memorial each year to nest and raise her chicks. Like all breeding female Laysan albatrosses, she lays only one egg per year and will spend a tiring 365 days incubating and raising her new chick.

Wisdom and was first banded in 1956 while she was incubating an egg. Chandler Robbins, a scientist affiliated with the U.S. Geological Survey, was the first to band Wisdom. He estimated at that time that Wisdom was at least five years old because that is the earliest age at which Laysan albatross breed.

Wisdom is estimated to have raised 30 to 35 chicks during her lifetime. 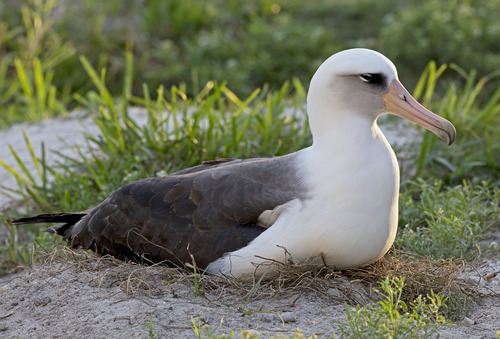 Wisdom lays only one egg per year and will spend 365 days incubating and raising her new chick. Photo by Greg Joder via USFWS Pacific Region on Tumblr 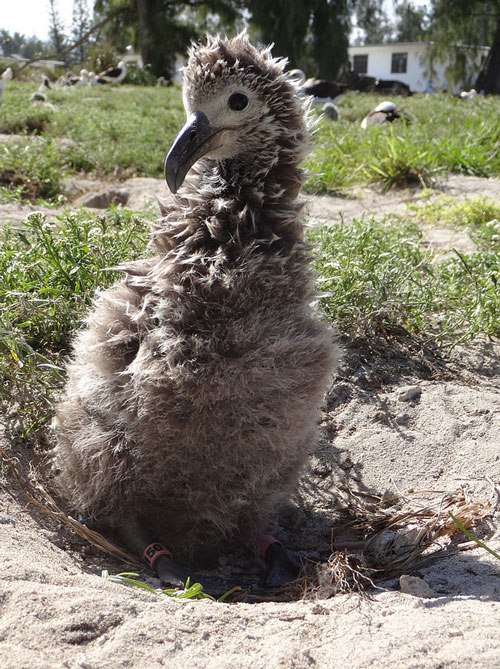 March 5, 2013 photo of Wisdom’s last chick, when it just over four weeks of age. Image via J. Klavitter, U.S. Fish and Wildlife Service.

Laysan albatross are large web-footed seabirds that lay a single egg each year during successful breeding seasons. They prefer to nest in large colonies located on remote oceanic islands. When fully grown, the wingspan of a Laysan albatross can reach up to an average of six and half feet (two meters) in length. Their large wingspan makes them excellent gliders, and they can travel long distances while exerting little physical effort. Scientists believe that she has flown more than 2 million miles since she was first banded in 1956. That distance is equivalent to about 80 trips around the Earth.

The Refuge and Memorial is home to 70% of the world’s Laysan albatross and is the largest colony of the albatross species in the world!

Click here to learn more about Wisdom and her home.