It has been a very active winter for the United States. Unfortunately, there’s more to come!

It has been an extremely active winter for the United States. We’ve seen drought in the West and a cold and stormy eastern half of country for most of the winter. Many areas have seen record amounts of snowfall. It is funny how polar opposite this winter is compared to the winter of 2012-2013. Instead of Alaska staying unusually cold, as happened last year, the cold air has focused further south into the eastern two-thirds of the country.

Meteorological winter ends on February 28, 2014. However, we will continue to see winter pack a punch across the United States. 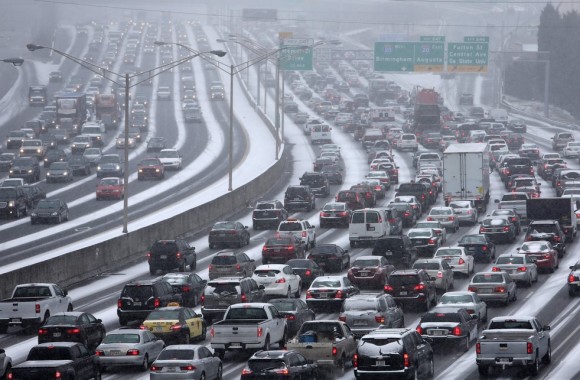 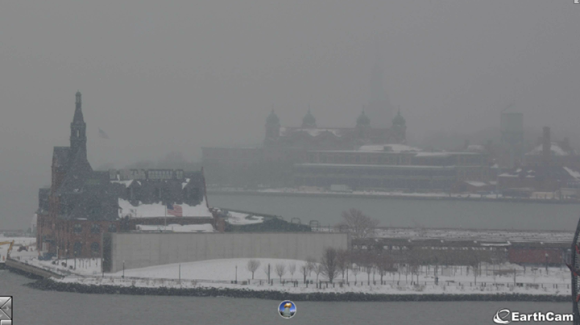 The view from Jersey City looking towards Ellis Island at 1105 am on February 15th as a light snow band overspread the region. The Statue of Liberty was barely visible in the far background. Image Credit: EarthCam via NY NWS Office

Winter has been brutal for the southeastern United States too. On January 28, 2014, a dangerous winter storm developed across the Southeast. Areas not accustomed to snow, freezing rain, and sleet experienced it, as moisture met up with cold, arctic air from the north. Snow was falling in all of the southeastern states, including Florida. The forecast was for one to two inches of snow to begin to fall late Tuesday morning (January 28) across Atlanta. Instead of closing businesses and schools, many of them decided to release their students and employees early from work after 12 PM. As soon as everyone got out on the roads, major traffic jams began to develop as snow was melting on the pavement and refreezing as temperatures were only in the 20s. Before too long, the snow had already created an icy blanket on the interstates and major highways. Shortly afterwards, interstates were completely at a standstill with motorists stuck. Meanwhile, the same scenario developed in Raleigh, North Carolina when the second winter storm hit the Southeast on February 11-12, 2014. The Southeast is simply not designed to handle winter storms. With very little tools and supplies to treat roads, it does not take long before the roads become nearly impassible with one to two inches of snow on the ground. Many schools throughout the Southeast have already missed at least five days thanks to snow, ice, or even extremely cold temperatures this winter season.

While the Northern Plains, Midwest, Northeast, and even the Southeast get winter weather mischief, the big story out west is the drought that continues across California and the Rocky Mountains. Over the past few weeks, we are seeing decent chances for rain across the Pacific Northwest and into parts of northern California. However, the drought and warmth across the region continues. The dominant weather pattern of a trough digging in the east and a large ridge on top of the west has made the weather pattern difficult for California to see any relief. The drought will likely cause impacts on food production and on the economy if they don’t see an improvement in the rainfall department. 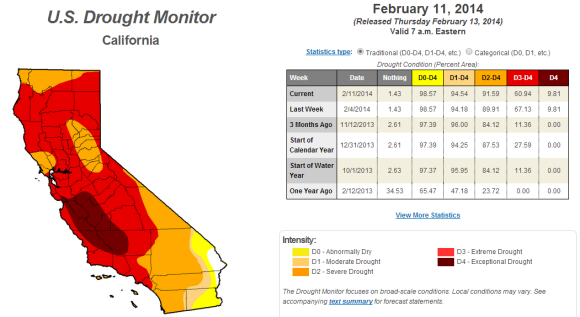 Drought continues across California with nearly 92% of the state experiencing a severe drought or worse. Image Credit: U.S. Drought Monitor

According to the U.S. Drought Monitor:

Little or no precipitation was reported in the Southwest as several locations in this region have yet to receive any measurable precipitation during 2014. The lack of appreciable winter precipitation has accumulated short-term deficits as most locations from southern California eastward into New Mexico have measured less than 25% of normal precipitation the past 60-days. Fortunately there was a surplus of rain at 6-months in most of these eastern and western areas; however, with drier conditions at 6-months in central Arizona and near the Salton Sea of southeastern California, D1 and D2 were slightly expanded there. According to the NRCS SNOTEL sites, Feb. 12 basin average snow water content remained low in central Arizona (13-33%, one site at 91%) and New Mexico (19-40% in the west and south, 41-60% in the north).

Winter is not over 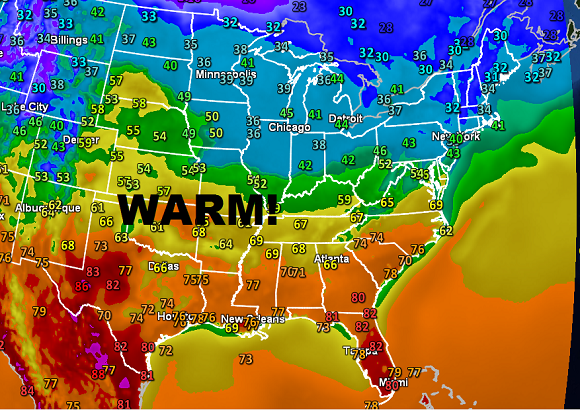 A little thaw is occurring across the eastern half of the United States on February 19, 2014. However, don’t get used to it. Winter is not over yet! (Image taken at 3 PM EST via GREarth

The Deep South and Mid-Atlantic are enjoying warmer temperatures this week. However, don’t get used to it. The weather models are indicating cold air blasting across the eastern half of the United States for the last week of February. From that big cold blast, storms could develop. More snow is likely and someone could get hit big with additional snow. Spring does not officially begin until March 20, 2014. We still have another month of winter before temperatures eventually rebound and warm up. Of course, we shift from winter storms to the aspect of severe weather as we push into March, April, and May.

Winter is far from over. Models are hinting at another surge of arctic air trying to spill southward into the eastern United States for the end of February. Image Credit: GFS via College of Dupage Weather

Bottom line: It has been an unusually active winter across the United States. If you aren’t seeing cold and snowy conditions, you are likely experiencing above average temperatures and drought. Weather works like a seesaw. If one side gets extreme weather, the other side is affected by it as well with opposite conditions. The pattern has remained persistent, and it looks to continue through the beginning of March. Could we see cities break snowfall records for the 2013-2014 winter season? Very likely. Stay warm!